His Holiness presided the meeting from MTA Studios in Islamabad, Tilford, whilst 148 Khuddam joined the meeting virtually from the Baitun Nasr Mosque in Norway.

One of the Khuddam asked His Holiness how the difference between revelation and a person’s own thoughts can be explained.

“Scientists can also be recipients of revelation and Hazrat Musleh Maud (ra) has written an essay on this. He has explained four stages, firstly for the prophets who progress and attain spiritual excellence and ranks and secondly for non-prophets who attain secular ranks. Some of the inventions that scientists make are a result of a state of revelation. Those ideas also enter their mind in the form of revelation. They ponder over a complex issue and Allah guides them.”

“The Promised Messiah (peace be upon him) has stated that sometimes the verses of the Holy Quran are also revealed upon some people and it is not necessary that they are revealed upon very pious individuals; they can be revealed to others as well so that they realise that Allah the Almighty certainly does reveal to the people. As a result, the intelligent individuals are able to deduce that if they are themselves able to receive revelations then most certainly the prophets also do receive revelation and Allah the Almighty reveals to them His laws.”

His Holiness said that some scientists are often pondering over an issue and suddenly a thought comes to their mind which reveals the solution to their predicament and that too is a form of revelation.

“We believe that when some scientists ponder over an issue and the solution to their problem is likely to be of benefit to mankind then God Almighty helps them and reveals to them a solution and this is also a form of revelation. These are the revelations for secular people. It does not have any link with spirituality and is secular in nature. There is a spiritual realm and then there is a secular realm. Where Allah the Almighty guides people in the spiritual world with revelation, so too does He guide those who are making new inventions in the secular world through the means of revelation.” 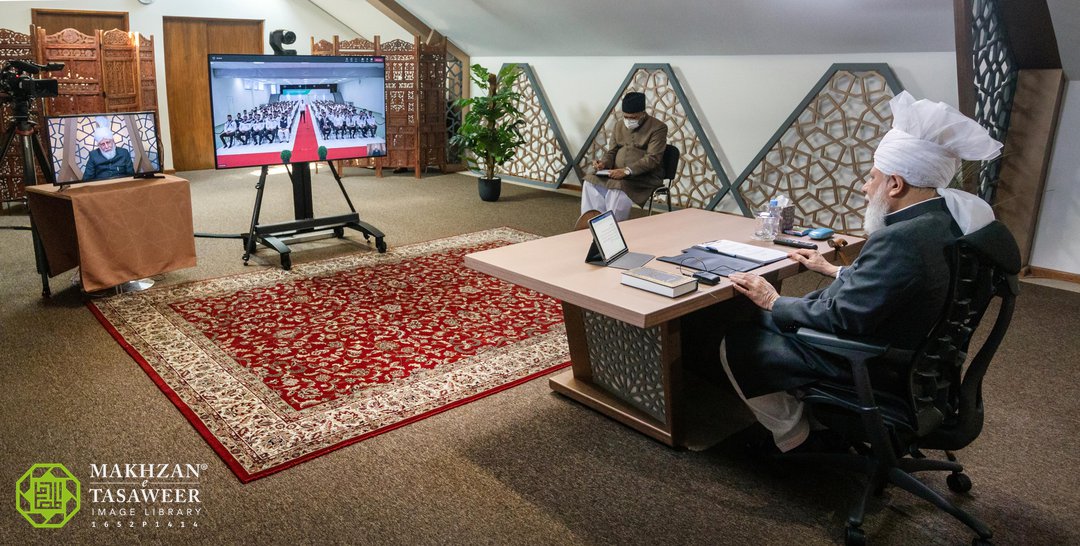 Another Khadim asked His Holiness how he served the Ahmadiyya Muslim Community whilst he was a Khadim.

“I do not know if I was able to serve [adequately] in any way. Regardless, whatever our superiors and the Zaeem or the Mutazim would require of us, we used to do accordingly. I served as a Zaeem, a Munatzim Atfal, Nazim in Rabwah’s Muqami Majlis and I have also served at the national level as a Mohtamim. So, we used to do as our superiors instructed and also we would try however we could to make policies for the betterment of the Ahmadiyya Muslim Community according to our abilities. So, this is how I served. Other than that, I do not know if there was any valuable service that I was able to offer. Anyways, I did whatever I was able to.  Therefore, you too should strive with pious intentions and utilise all your God-given capacities and abilities to serve the Majlis. Alongside this, try to ensure that you are regular in your five daily prayers and pray to Allah the Almighty that He enables you to serve in the best way. So, beseech Allah’s help and serve with pure intentions. This will bring about blessings.”

Another Khadim also asked His Holiness what role a person can play to help bring about the eventual victory of Islam.

“The foremost thing you must do for the victory of Islam is pray for it. Observe your five daily prayers regularly and beseech Allah during them. Offer Nafl (voluntary) prayers and beseech Allah the Almighty during those prayers that He enables us to see the victory of Islam and that He makes us a part of it. Towards achieving this purpose, you should strive to increase your knowledge. The foremost way you can develop your religious knowledge is by reading and studying the Holy Quran. In this era, you should also read the books of the Promised Messiah (peace be upon him) which contain the commentary of the Holy Quran and of the Ahadith.” 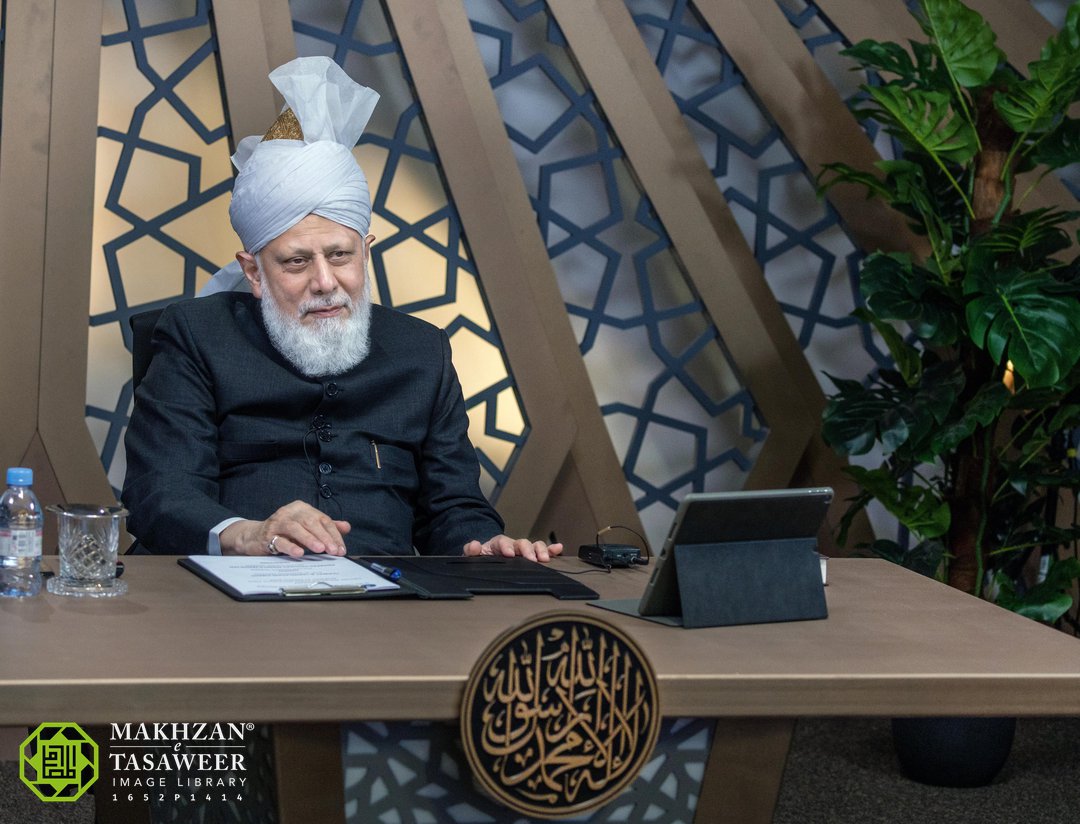 “Along with attaining religious knowledge, you should ensure you act on that knowledge and mould your life according to it. Your actions should reflect the teachings of Islam. Our actions and words should be one and the same. We should also convey the message to the people. When people see that our words and actions are the same, they will listen to us and Allah the Almighty will place blessings in the efforts. So it is our responsibility to convey the message of Islam to people and it is up to Allah to bring people towards accepting the message. We should continue to play our part by praying, seeking knowledge, acting according to that knowledge and by spreading that knowledge through Tabligh.”

Another Khadim enquired His Holiness’ advice on how to safeguard oneself from the harms of social media.

“You must have a strong resolve and be determined to avoid watching inappropriate content and instead, only consume good and pious content. There is good content too on social media. You should watch that content only and avoid anything that is bad. Social media does have a potential for being used in a good way and so you should use it well.”

His Holiness also said that in order to avoid the harms of social media, one should seek the forgiveness of Allah the Almighty and should seek His protection through prayers such as ‘Istighfar’.

Advising the youth about making a conscious effort to distinguish between right and wrong, Hazrat Mirza Masroor Ahmad said:

“You should absorb such media or information that helps to increase your knowledge or such sources of media that drive you towards doing good. You should visit the websites of the Ahmadiyya Muslim Community and see what you can learn from them. Hence, it all depends on your mind-set. Allah the Almighty has told us what the satanic things are and what are the ways of coming closer to Allah. So you have to determine for yourselves whether you wish to follow the satanic ways or the pathways of Allah. Allah the Almighty has given you very able minds and so you should make conscious decisions using your intellect.”

A father in attendance asked His Holiness for advice on good parenting so that children go on to become pious individuals, despite the effects of the society around them.

“Parents must present their own examples to their children. [Good parenting is] when the father observes his five daily prayers and advises his wife and children to do so too and advises them to recite the Holy Quran. It is when the father is morally good and advises his wife and children to also adopt good morals. It is when the father builds a bond of friendship with his children according to the environment we are living in and he shares everything with them and builds confidence in them to share with him everything they experience outside of the home. A father must adopt patience in order to be able to listen to his children and discuss their issues and if they have any doubts then he should remove them. So this is how you can bring about a good moral training of your children.”

“If you neglect your children and you are only fixated upon your work and are trying to make money; if you are only worried about your mortgage and force your wife to work and make money so that you can purchase a house, then your children will come back home from school and take their meal from the fridge themselves and will think that neither of their father and mother care about them. They will think that their parents do not care about their prayers and the children will not have seen their parents offering the prayers either. So when they see they that their parents are busy trying to make money, the children too will think that this is how the world works and this is what society is like and so they will also do the same. So these are the challenges we face.” 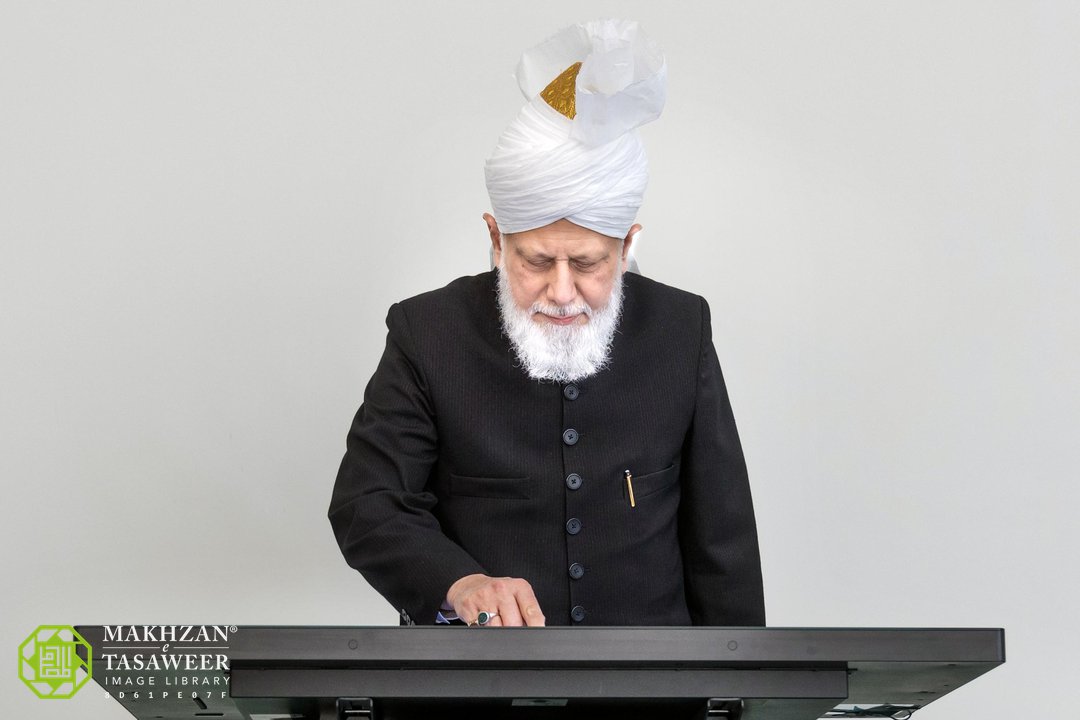 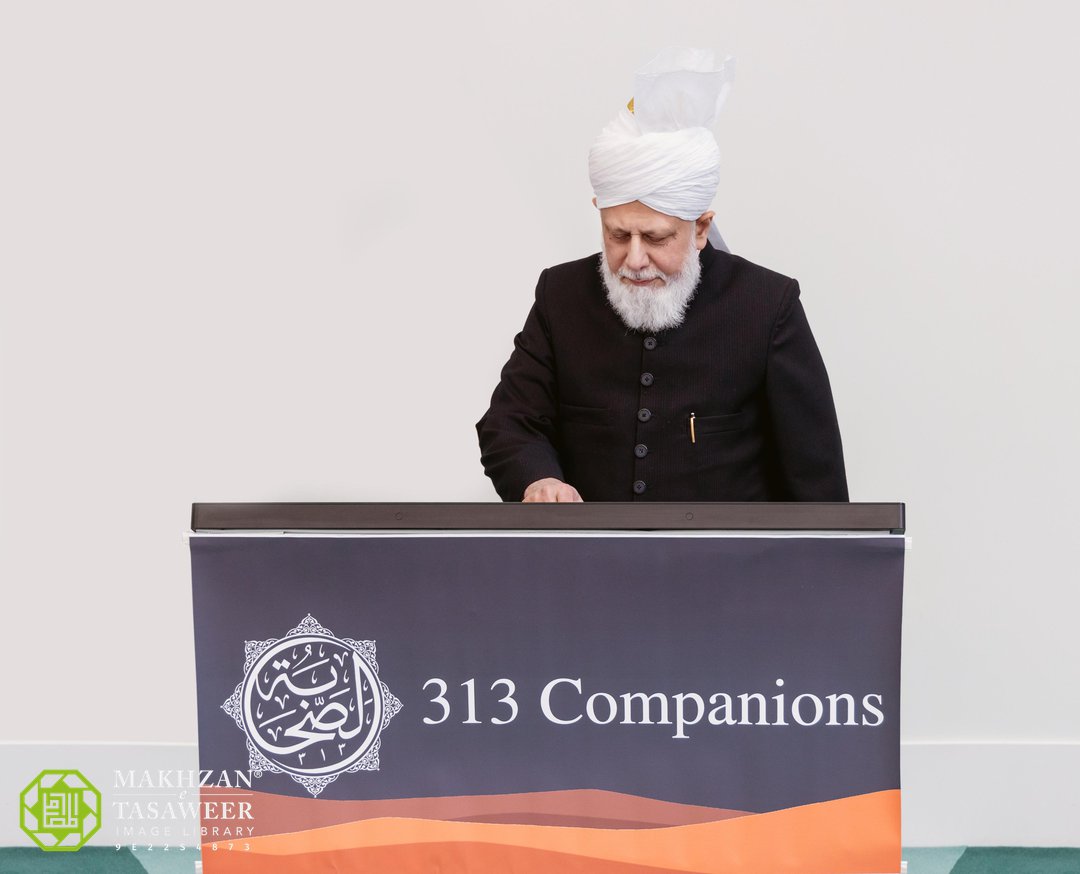