On 14 October 2022, the World Head of the Ahmadiyya Muslim Community, the Fifth Khalifa (Caliph), His Holiness, Hazrat Mirza Masroor Ahmad delivered his weekly Friday Sermon from the Bait-ur-Rahman Mosque in Silver Spring, Maryland whilst on a historic tour of the United States of America. 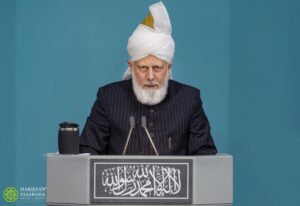 Over 5,500 people attended the Friday Sermon, during which Hazrat Mirza Masroor Ahmad said:

His Holiness mentioned that those Ahmadi Muslims who had migrated to America and found safety and refuge should ensure that they and their future generations should not deviate from sincerely following their faith. 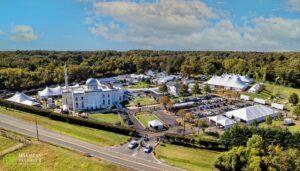 “Terrifying clouds of war hover above us.  Just recently, the American President warned that if Russia uses nuclear weapons, there will be a reaction which will lead to ‘Armageddon.’ Therefore, the people living in these [Western] countries should not assume that they have become safe by migrating there. No one is safe anywhere. When the minds of these ‘powerful’ leaders become twisted, they care not for anything. Thus, in this day and age it is the responsibility of Ahmadi Muslims to turn to prayer and sincerely worship Allah the Almighty.”

“It is the faithfulness of Ahmadi Muslims and their relationship with Allah the Almighty and their prayers that can save the world from its destruction. Generate sympathy in your hearts and then pray for the people. Explain to the people that are within your circle of influence that if we do not fulfil our obligations towards Allah the Almighty and His people, then we will see that the beautiful world before us will turn into barren ruins. Therefore, every Ahmadi Muslim must fulfil their obligations with this realisation in mind.”

Speaking of the history of the Bait-ur-Rahman Mosque, His Holiness mentioned that on this very Friday, the Mosque has reached its 28th anniversary since its inauguration.

“Those who live around this Mosque, the newcomers and the old residents should ask themselves how they have progressed in their spirituality in the last 28 years and how successful they have been in fulfilling the rights of this Mosque. May Allah enable those who come to this Mosque to see the coming decades and centuries of this Mosque and may Allah keep it protected from all kinds of disasters. However, the true rights of the Mosque will only be served when we fulfil our obligations towards it and make it filled with worshippers.”

Inauguration of Bait-ul-Qayyum Mosque, Fort Worth

A week earlier, on Friday 7th October, His Holiness travelled to Fort Worth to inaugurate the Baitul Qayyum Mosque based in the city of Fort Worth.

After unveiling a plaque to mark the inauguration of the Mosque and planting a tree, His Holiness inspected the premises. Prior to the Maghreb and Isha prayers, the local members of the Ahmadiyya Muslim Community had the opportunity to meet His Holiness during which His Holiness encouraged that they should ensure that attendance for prayers increases at the Mosque.

At midday local time on Sunday 9th October, His Holiness departed from the Baitul Ikram Mosque and took a flight from DSW International Airport. His Holiness arrived at BWI Thurgood Marshall Airport, late afternoon and proceeded directly to the Bait-ur-Rahman Mosque in Silver Spring.

Upon arrival at the Mosque, His Holiness was greeted by over 2000 Ahmadi Muslim men, women and children who were eagerly awaiting his arrival. 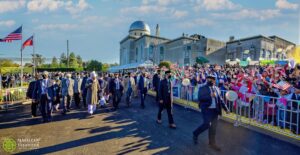 On Monday 10th October, His Holiness inspected a new Guest House of the Ahmadiyya Muslim Community based near the Bait-ur-Rahman Mosque.

His Holiness also inaugurated Sirai Khidmat which is to serve as the headquarters of Majlis Khuddamul Ahmadiyya USA (Ahmadiyya Muslim Youth Association). 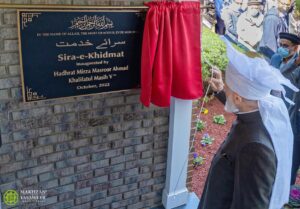 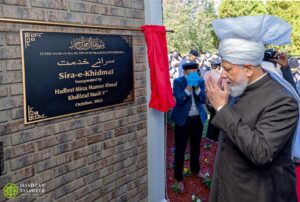 Later in the day, His Holiness held collective meetings (Mulaqats) with Ahmadi Muslims, separately with both men and women, where they had the opportunity to speak to His Holiness and seek his prayers.

Throughout the tour, aside from collective Mulaqats with Ahmadi Muslims, His Holiness has met with hundreds of Ahmadi Muslims in personal and family Mulaqats.

Meeting with recent converts to the Ahmadiyya Muslim Community

On Tuesday, His Holiness also held a meeting with recent converts who had joined the Ahmadiyya Muslim Community.

During the meeting, His Holiness spoke to each of the 46 attendees and advised that they should seek to regularly recite and understand the Holy Quran and in particular, they should learn the first chapter of the Holy Quran which is essential for offering the five daily prayers. 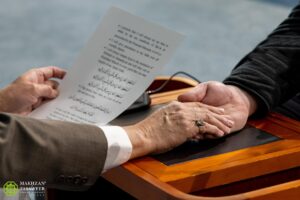 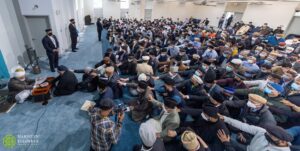 During the converts meeting on Tuesday, one of the attendees mentioned that he had not yet converted to the Ahmadiyya Muslim Community but now wished to convert and so requested His Holiness if he could have the honour of taking the Pledge of Allegiance (Bai’at) at his hands.

The following day, on Wednesday, after the Zuhr and Asr prayers, His Holiness led him in an emotional Bai’at ceremony. All those present at the mosque were also able to join in forming a human chain which led up to the hand of the Caliph of the Ahmadiyya Muslim Community to take the pledge of allegiance.

The same day, His Holiness visited MTA International’s complex that houses its facilities and ‘Teleport’ from where MTA regional channels are broadcast through satellites to North America and South America.” 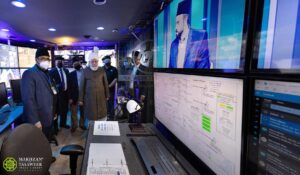 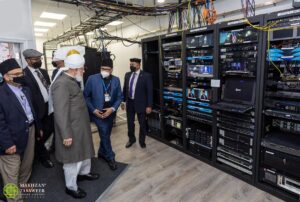 Later that day, His Holiness held a meeting with Waqfat-e-Nau girls aged 12 and above during which the attendees had the opportunity to ask questions on a range of contemporary issues.

One of the questioners asked His Holiness how he sees the development of the Russia-Ukraine War. 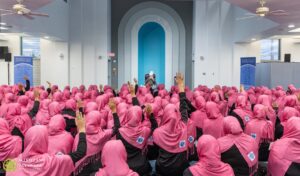 “It is not the matter of only Ukraine and Russia war. It seems as if it is going beyond the borders of Russia and Ukraine. The whole world is going to be involved. If the whole world is involved in this war, then I hope quite a number of people will realise and start thinking why it has happened. There will be very few people left to ponder over it, to think about it, that what has happened. And those who will be left behind, they will, I hope, try to then go to find their Creator, towards the good things, to search for the true religion. And then at that time it is the duty of Ahmadi women and men to guide them on the right path that, ‘now you have seen the result of your worldly desires, and now Allah says that you should follow my injunctions and commandments and obey my teachings and practice what I say and believe in me firmly. Then if they don’t realise it, then there’s going to be another havoc. The whole world will be doomed. So, we cannot say what is going to happen. So, we should pray and get ourselves ready to preach the true message of religion and how to bring people closer to their Creator.”

Another attendee mentioned that Ahmadi Muslims feel sad whenever His Holiness leaves a place after visiting it. She asked how His Holiness feels when he has to leave.

“If you will feel sad when I leave, then the same sentiments are mine. That is what happens. But after some time, you forget that I came here and I left. [But] I never forget you. I keep on praying for you all the time. So, this is how the world works and this is how we should behave that a person who comes here in our town or city or in the world, he has to go back and we should pray for the person, for each other. This is how we can strengthen the bond of relationship. That you should do and that is also what I should do.”

One of the members of Waqf-e-Nau scheme asked His Holiness about what efforts they can make to towards combatting climate change.

“You should plant more trees. You should only try to use your vehicle when it is direly needed; not just to go to a nearby burger shop, or for travelling a hundred yards. Don’t pollute the atmosphere. Try to reduce carbon emissions and plant more trees. Every Waqifa-e-Nau should plant at least ten trees in a year and so you will be able to plant thousands of trees. That will also help. And also let the people understand and make them realise their duties. Try to be a big promoter and preacher of climate change and greenhouse effect. So, this is how you can help your country and your neighbour and your town.”

Following the meeting, Waqf-e-Nau boys aged 12 and above also had the honour to have a sitting with His Holiness.

A Waqf-e-Nau asked His Holiness how he stayed attached to Khilafat when he was physically at distance from the Caliphs before him due to being in Ghana or Pakistan whilst the Khalifa of the time was in a different country.

“I was brought up in such an atmosphere where I was taught that there is no spiritual life without Khilafat. When I dedicated my life and I went to Africa, I used to write to Khalifatul Masih III and Khalifatul Masih IV. Also, I used to pray for myself that I always remain close to Khilafat and I never ever do something which disturbs Khalifa of the time. And this is how you can strengthen your bond with Khilafat. You should also do the same. Try to make personal contact and relation with the Khalifatul Masih and pray for him daily in your prayers and pray for yourself as well that Allah the Almighty strengthens you in your faith and the bond and the relation with the Khalifatul Masih.”

An attendee also asked His Holiness if the recent floods in Pakistan were a result of the punishment of Allah the Almighty due to their persecution of Ahmadi Muslims in the country.

“It is not only the persecution of Ahmadi Muslims in Pakistan. There are quite a number of wrong deeds they have been doing. Even their own political leaders and their own Mullahs (religious clerics) have started saying that this flooding and all the chaos in the country, the political disturbance, is a punishment from Allah the Almighty. But they do not want to realise this fact that it is because of their bad habits and their bad deeds and their killing of innocent people. So, I think this can be one of the causes.” 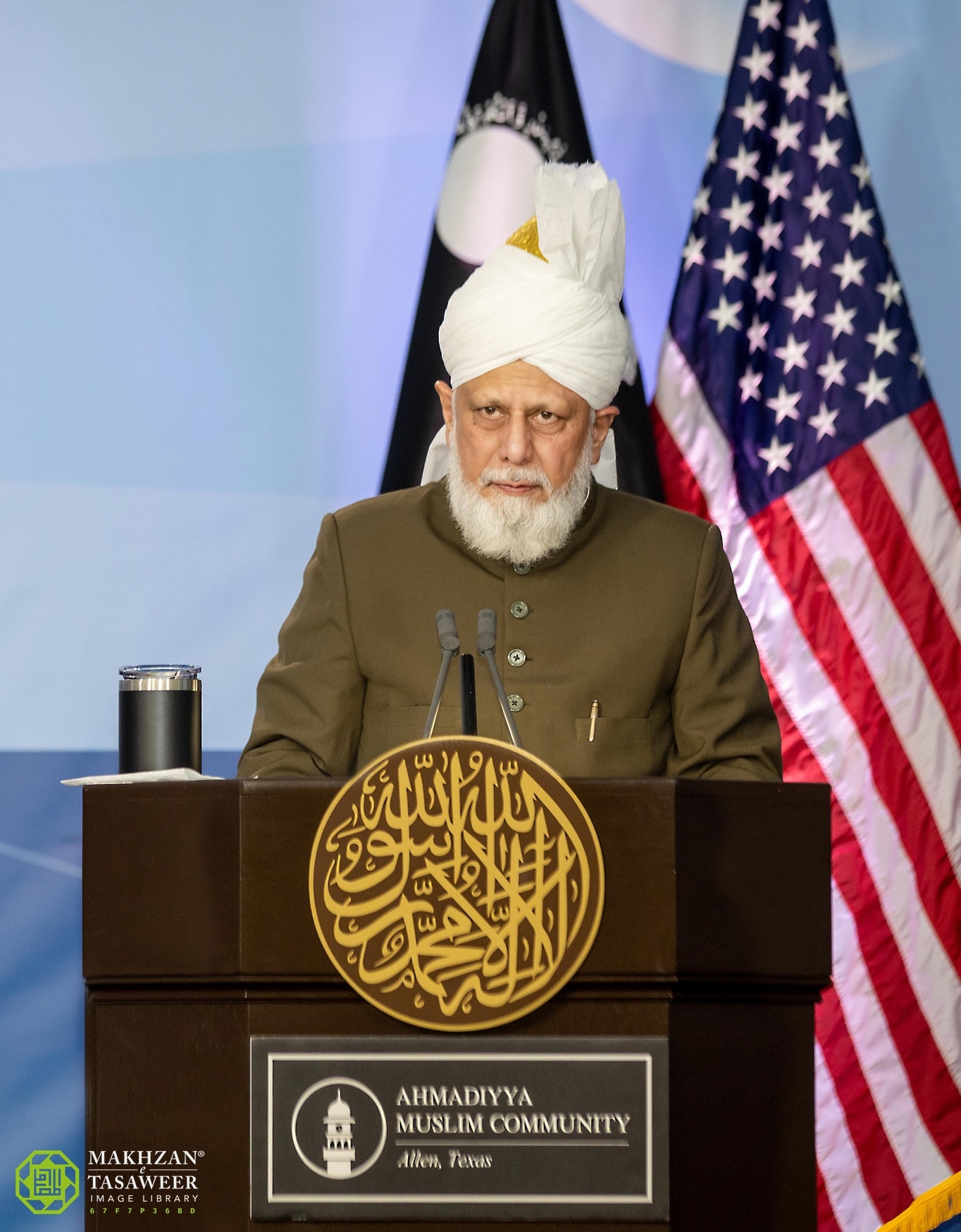 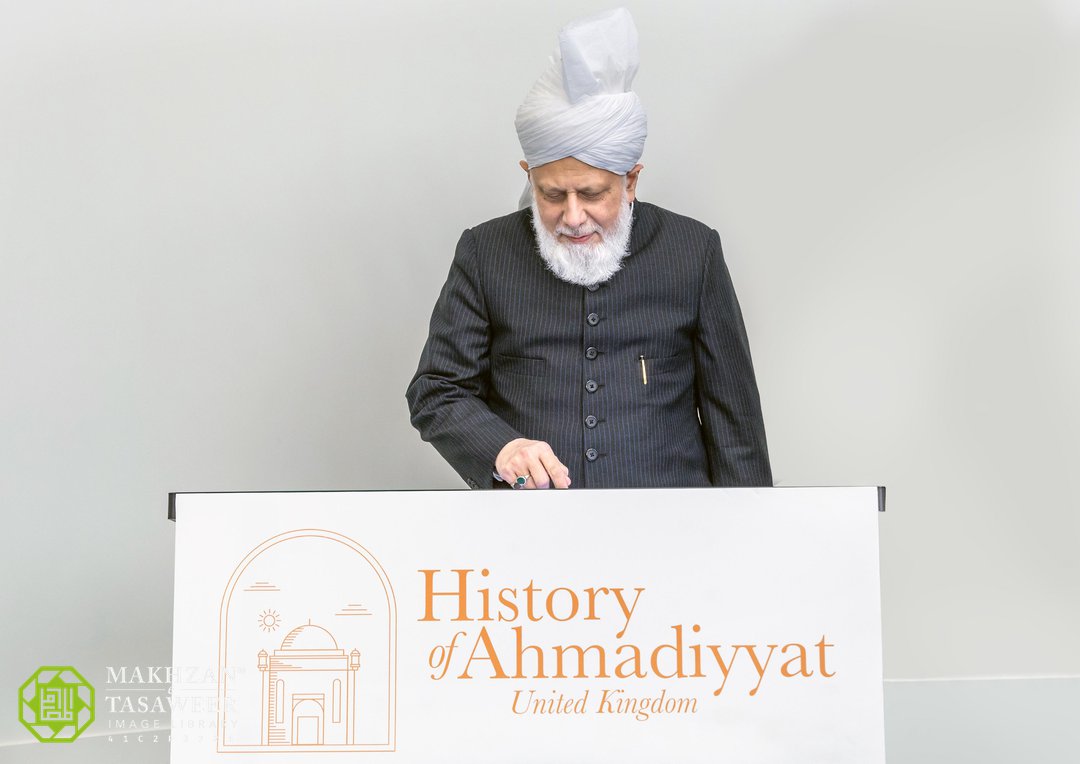