His Holiness presided the concluding session virtually from the Masroor Hall in Islamabad, Tilford, whilst more than 19,700 people attended the 3-day Jalsa Salana in Karlsruhe, Germany. Those who could not participate due to Covid-19 restrictions, both in Germany and elsewhere, were able to listen live to the faith inspiring concluding address of His Holiness.

During his address, His Holiness outlined the key principles of peace the world direly needs to avoid another world war. His Holiness presented his view that Islam’s teachings about peace were the only answer to the issues facing the world today.

“For a long while, European nations and other Western countries or developed nations were sitting content presuming that the people facing turmoil, war and destruction are thousands of miles away and so they are safe where they are. They thought to themselves that, ‘It is in Asia and the Middle East where conditions are adverse and bombs are exploding. It is there that people are dying, women are being widowed, children are becoming orphans and people are losing their limbs. And so, to us it makes no difference.’ The developed countries continued to send ammunitions into war-torn countries so long as they were able to sell their weapons. To them it did not matter if lives were being lost. But they forgot that the same conditions could eventually develop in their own countries! They were blindsided by their arrogance and they lost the sense of reality. Now the entire world can see that what was feared has now been realised and Europe is now once again home to war, as Russia and NATO stand in opposition over Ukraine.”

“Allah the Almighty knows best who will eventually come out on top, or how much of a loss both parties will suffer, but one thing is certain that its aftermath will be extremely dangerous. If they continue to fail to act with wisdom or sense, the consequences can only be a terrifying catastrophe. Furthemore, we observe how the situation in Taiwan has also flared up and it is evidently clear that the entire world is now standing on the brink of a devastating war.”

His Holiness mentioned a quote of the Promised Messiah (peace be upon him) in which he said:

“‘O Europe, you are not safe and O Asia, you too, are not immune. And O dwellers of Islands, no false gods shall come to your rescue. I see cities fall and settlements laid waste.”

His Holiness said that after the Promised Messiah (peace be upon him) the Caliphs all warned of this and His Holiness has also repeatedly warned of the dark clouds of war that are increasingly engulfing the world. For a long time, His Holiness said, many people considered these warnings to be hollow but the same people are now coming to the same conclusions.

His Holiness said that think-tanks or foreign-policy ‘experts’ are now finally recognising the danger at hand, yet they possess no real solutions.

“They do not possess the solution to establishing lasting peace and in truth, how could they, considering that their attention is not turning towards the fountain of peace [the Holy Prophet Muhammad (peace and blessings be upon him)]? They are engulfed by the world and have disregarded faith. The abode where the solution lies [i.e., in following the teachings of the Holy Quran], it is a sad truth that not only do non-Muslim nations fail to draw nearer to it, the Muslim powers are also distant from it.”

His Holiness mentioned that analysts have asserted that the destruction resulting from a nuclear war between Russia and the United States will be so devastating that within two years, two thirds of the world’s population will be wiped out.

“If a nuclear war erupts, there will be such havoc and destruction that nobody can fathom it. An ordinary person cannot even begin to think of such a thing. Thus, times are very dire. If there is a ray of hope and a guarantee of peace, it is in the one and only person who was sent with the teaching of peace and security to the world. He is the person who is the King of Peace [the Holy Prophet Muhammad (peace and blessings be upon him)] and he is more beloved to Allah the Almighty than all others. He is the one who brought the final and complete law, whose teachings are filled with love and kindness.” 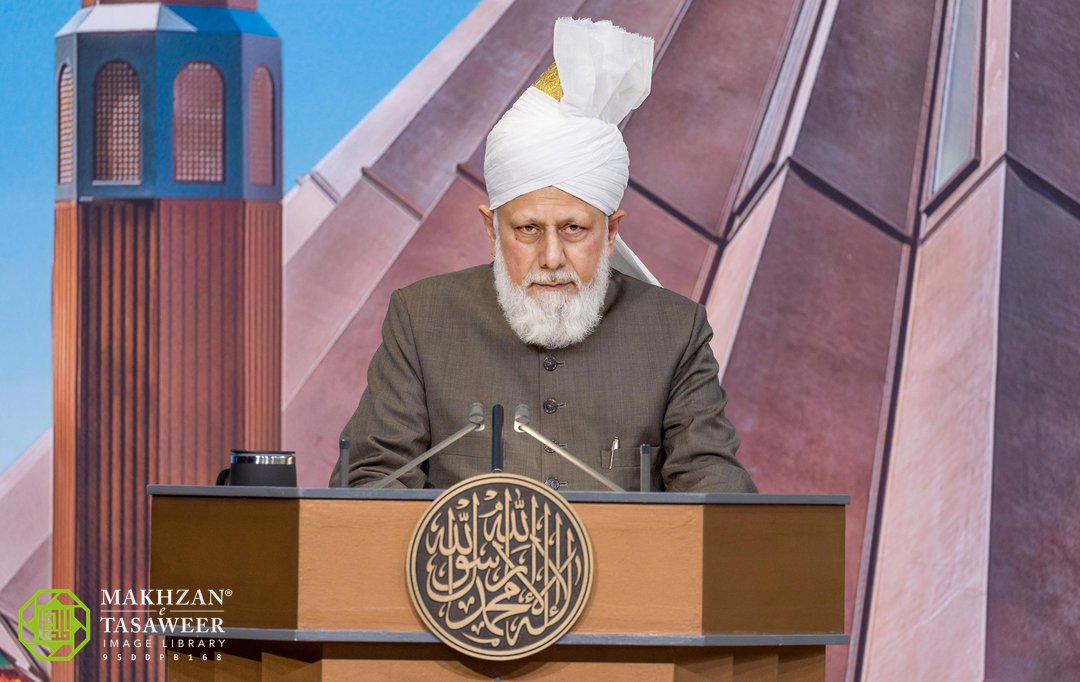 Speaking further about the ardent desire that the Holy Prophet Muhammad (peace and blessings be upon him) had for people to live together in peace and security, Hazrat Mirza Masroor Ahmad said:

“Due to his strong relationship with God Almighty, the Holy Prophet Muhammad (peace and blessings be upon him) was the one who put his own life in extreme pain and hardship out of a desire to spread the teaching he was revealed. He was consumed with grief and was angst for the state of mankind due to his desire to save humanity from its destruction. He had become burdened and pained out of his own concern for people and he yearned and cried so much in his prayers for the world that Allah the Almighty said to the Holy Prophet Muhammad (peace blessings be upon him), ‘Haply thou wilt grieve thyself to death because they believe not.’ Such was the love he had for people that they may turn to their Creator and save themselves.”

His Holiness went on to speak about how it is completely unjust of people to claim that Ahmadi Muslims have no love for the Holy Prophet Muhammad (peace and blessings be upon him).

Speaking of some of the key principles taught by the Holy Prophet Muhammad (peace and blessings be upon him) for the establishment of peace, His Holiness said that he taught for people to desire for others what they desire for themselves.

“We must always remember this golden principle that we must desire for others what we desire for ourselves. We should always realise that if we desire peace only for ourselves and not for others, then we will never be able to attain the love, pleasure and the help of Allah. Only when a person believes that he must do everything for the sake of Allah alone, can true peace be established.”

Elaborating further upon this, Hazrat Mirza Masroor Ahmad mentioned the principles of peace taught by the Holy Prophet Muhammad (peace and blessings be upon him) and said:

“Until our intentions are pure, we should remember that we will never be able to achieve true peace… People say that violence is wrong, and all leaders proclaim that waging wars is not the right approach. However, they only mean this with the intention that the wars waged by others against them are wrong but if they themselves wage a war, then it is not wrong. This deficiency in morals is because of the fact that their eyes are not fixated upon the Being that is ‘Peace’ and is the ‘Source of Peace’. They raise slogans of peace so long as it is in their interest. As as soon as their interests do not align with it, they reject peace. They think that it is never acceptable that anyone should dare provide weapons to their enemies. But if they themselves provide weapons to their alliances, even where it is being used to commit injustices, it becomes legitimate. When this is their practice, how could there possibly be the establishment of true peace?”

Speaking about the philosophy that can lead to real peace, Hazrat Mirza Masroor Ahmad said:

“The establishment of true peace can only occur when there is a belief in the fact that there is a God Who desires that all people should live in peace. Only when a person believes this and acts accordingly can the person’s desires encompass that which is beyond their own limited self-interest. Their desires will be geared towards that which is beneficial to mankind in general. When this is realised, the standards of our thinking and our desires of establishing peace will be at a completely new level; we will not think about things from the perspective of them being beneficial for us, rather we will think about how they will impact the world. Worldly people always end up destroying the peace of others for their own interests. However, the ones who believe that there is a Divine Being, they will never dare to act in this way because they will realise that if they act in a wrong way then a Most Powerful being will cause their destruction.”

Speaking about the same subject in relation to a verse of the Holy Quran, Hazrat Mirza Masroor Ahmad said:

“The reciter of the verse praises the God Who is the Lord of the entire world and of all eras; Who is the Lord of the Christians and the Hindus and the Jews; the Sustainer of all people. When a person recites these words, then how can they ever develop hatred for anyone in their heart?… We have been taught in the words ‘All praise belongs to Allah, Lord of all the worlds’ that if a person sincerely believes in the Unity of God and his tongue is forever engaged in the praise of the Lord of all the worlds, then it is not possible that such a person can harbour malice for any individual… Thus, only a true believer in the Unity of God can be the flag bearer of genuine peace and security.” 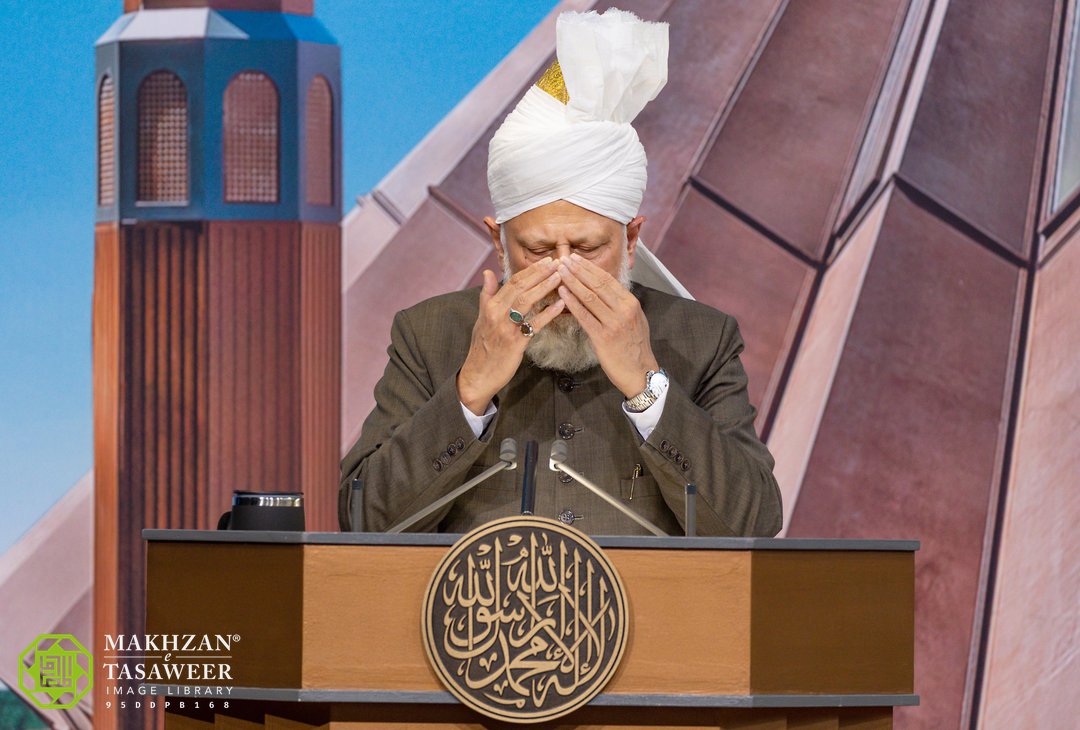 “Today this task [of establishing peace] has been assigned to the Community of the Promised Messiah (peace be upon him). If in line with this task, we also fail to fulfil our role in establishing peace at all levels of society, starting from within our homes, all the way up to the international scale, then we have no guarantee of living in peace ourselves and nor will our future generations, or the world at large. May Allah the Almighty enable us to be the means of propelling the world out of a state of perpetual darkness into a state of everlasting light. May Allah the Almighty enable us to fulfil our obligations in the best way.” 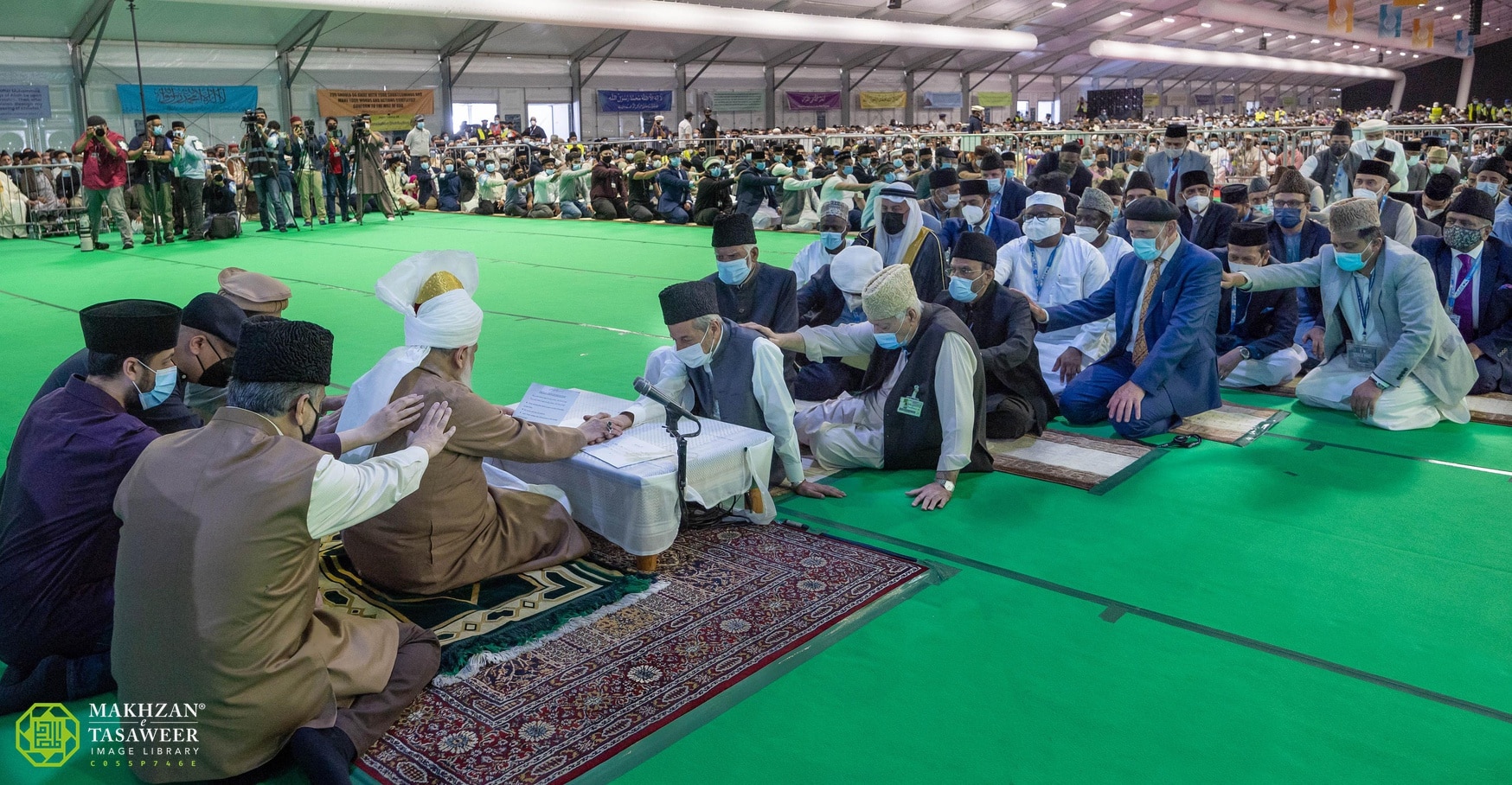 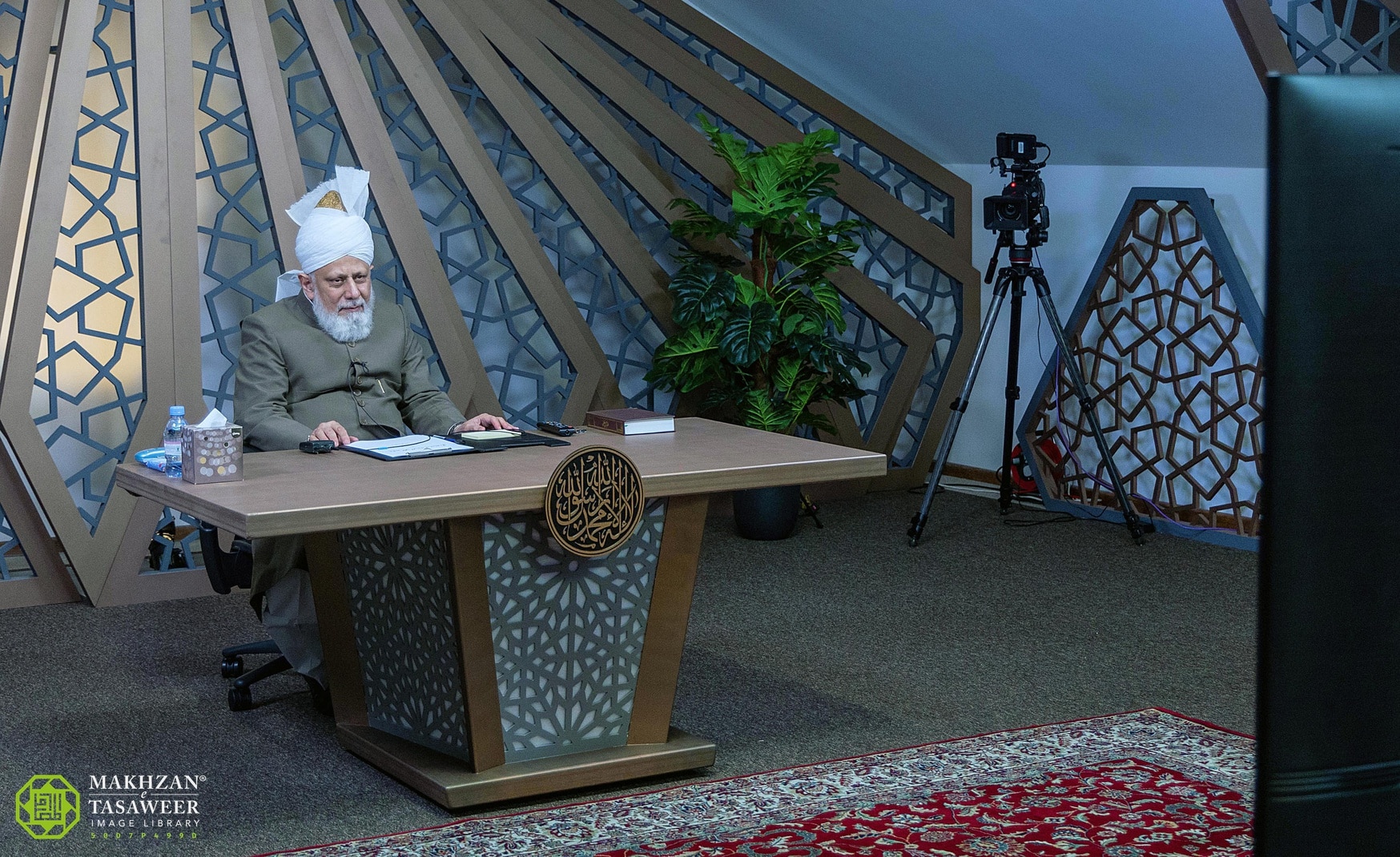