More than 26,600 people attended the Jalsa Salana, which took place at Hadeeqatul Mahdi in Alton, Hampshire.

This year due to the continuing covid-19 related restrictions, the attendees were primarily from the UK with a limited number of international guests. The entire event was broadcast live on MTA International and streamed online.

A highlight of the three-day Jalsa Salana was the pledge of allegiance, known as Bai’at, which took place on Sunday afternoon. The Bai’at ceremony returned after a gap of three years with the last such occasion taking place before the pandemic in 2019. The participants once again formally pledged allegiance to Hazrat Mirza Masroor Ahmad as the Fifth Khalifa (Caliph) of the Promised Messiah (peace be upon him). 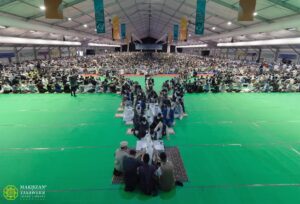 Prior to the ceremony, His Holiness announced that more than 176,800 people had joined the Ahmadiyya Muslim Community during the past year from 109 countries around the world.

During the concluding address, His Holiness continued with the theme of shining a light on the superior rights that Islam grants to mankind that are unmatched in any other faith or ideology. This was the third in a chain of addresses delivered by His Holiness on this theme with the first two addresses being delivered at the concluding sessions of the Jalsa Salana UK of 2019 and 2021.

At this year’s address, His Holiness focussed on the rights that Islam grants to women and the weak members of society. His Holiness presented a wholesome view of how Islam champions the rights of women and does not make empty slogans, rather enacts rules that elevate the status of women in a society. 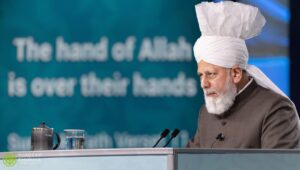 Highlighting the flaws of current day movements that claim to support the rights of women, Hazrat Mirza Masroor Ahmad said:

“Nowadays when the rights of women are being hailed, there is a failure to consider some basic fundamentals. When they make rallying cries for the rights of women, they also take away their religious freedom and the right to practice their faith. When they try to take their rights from men, they do so in a way that it ends up creating a rift between men and women.”

“They [the women’s rights movements] do not know how to solve the barriers that exist due to economic, social and cultural norms. They simply make a slogan that women and men are equal and assume that they have achieved a great feat in doing so. They do not ponder over the finer details and fail to make appropriate rules according to the reality of the challenges that exist. They do not think of the consequences of the rules that they themselves are creating to forge an equality. They fail to assess whether they are creating peace in society or are they furthering unrest? They do not care if their policies and ideologies are breaking apart the family unit.”

His Holiness went on to highlight how 1400 years earlier, Islam gave teachings that protect the rights of women and the minute details that Islam caters for in this regard.

His Holiness quoted chapter 4 verse 2 of the Holy Quran which is recited at the time of the Nikah (Islamic marriage) ceremony. The verse states:

“O ye people! fear your Lord, Who created you from a single soul…”

“Allah the Almighty has reminded the believers that they should never forget that both men and women are from the same soul and so are of one and the same kind. Therefore they have the same brain, and both have the same emotions and feelings. This verse is recited at the Nikah ceremony which means that it should be made clear at the time of Nikah that this matrimonial bond can only be strong if the man realises that the woman is the same as him in terms of her feelings, emotions, understanding and her rights. Therefore the man should not think that she is inferior to him in any way. The same lesson has been taught to the woman too.” 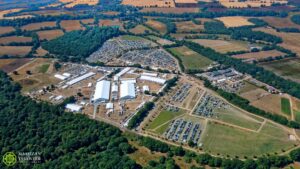 Speaking of the practice of the Holy Prophet Muhammad (peace and blessings be upon him), Hazrat Mirza Masroor Ahmad said:

“The personal practice of the Holy Prophet (peace and blessings be upon him) was that he would consult women in important matters. In the society where Islam was born, women were treated in such a derogatory manner that they were not allowed to express their opinions on trivial matters, let alone being consulted on important decisions. However the Holy Prophet (peace and blessings be upon him) would consult them. This had created such bravery amongst women that they would be able to rebuke men whenever they placed any unnecessary restrictions upon them. It is narrated about Hazrat Umar (ra) that once when his wife expressed an opinion on a particular matter, he scolded her to say that she had no right to interfere in the matter. She replied, ‘You should remain silent. That olden times have passed. The Prophet Muhammad (peace and blessings be upon him) has given us the right to speak. We also possess a brain and are able to express our opinion on important matters.’ In fact, the female companions learnt the faith and some of them would often give their advice to the Caliphs. Thus Islam gave rights to women at a time when they were considered worthless.”

His Holiness also explained that Islam gave women the right to inherit, which is something the West has only managed in the past century.

His Holiness went on to quote several examples and quotes from the life of the Holy Prophet Muhammad (peace and blessings be upon him) which emphasise the kind treatment of women.

Referring to the numerous references in relation to the rights of women, Hazrat Mirza Masroor Ahmad said:

“All the references that I have presented are mainly in relation to the emphasis Islam lays upon the rights of women. The rights of men have not separately been stipulated as such in Islam. Even if there are such references, they are very few. This is because, generally within societies you see a dominance of men and thus men manage to attain their rights… In underdeveloped countries and in less educated societies women are particularly treated unjustly. The majority of the Muslim population is living in under-developed and less educated countries and so the rights of women are not given there and women are treated poorly. If men wish to speak of their own rights and if they wish to have their rights given to them then they must also fulfil the rights of women. This is the teaching of Islam. Given the general situation that exists [whereby men are dominant within societies], Islam has laid greater emphasis on fulfilling the rights of women. Despite this, people still seem to claim that Islam does not fulfil the rights of women!”

His Holiness then went on to explain the rights in Islam of ‘those who ask for charity and those who cannot.”

His Holiness explained the philosophy of giving in charity and who should be the beneficiaries. Referring to the quotes of the Promised Messiah (peace be upon him) and Hazrat Khalifatul Masih II (ra), His Holiness mentioned that Islam emphasises the vast importance of giving to those who ask for help. However, at the same time, Islam also emphasises that the upper hand that gives is better than the lower hand that receives and thus Islam discourages those who are able to stand on their own feet from becoming habitual beggars.

However, His Holiness also said that for those who are to give in charity, whilst they can make the decision to not give in charity to those who would misuse the money, they may still give to people regardless of their circumstances because giving in charity is worthy of receiving the rewards of Allah the Almighty. They can do charity in a way that they try to help the recipient and also advise them to leave any bad habits.

His Holiness went on to explain that there are people in society who ask for help but there are those who do not or cannot do so and a true believer should seek to find ways to help even those who are unable to ask for help or who choose not to do so out of their self-dignity.

Speaking further about the finer details that are covered by Islam about giving in charity, Hazrat Mirza Masroor Ahmad said:

“Whenever a beggar or a person in need would come to the Holy Prophet Muhammad (peace and blessings be upon him) to seek help, he would advise his own companions to also make the case for the person in need so that they can also benefit from the reward of Allah the Almighty of doing charity…Thus, not only has the right of the person who seeks help been explained in this reference, rather the people who support a person in his efforts to seek help have been given glad tidings of attaining the reward of Allah. The attention of the believers has been drawn towards ensuring that they too should try to help those in need and if they themselves are not able to help the person who has a legitimate need, then they should try to find a way for that person to get the help that is needed.”

“Materialistic people try to attain their own rights out of their vested interests. However, Islam emphasises that a person should seek to fulfil the rights of other people without any self-interest. If we truly act upon this teaching, it will result in introducing the teaching of Islam to the world. May Allah enable us to act upon the teaching of Islam so that we are able to help and assist in the mission that the Imam of the age has been tasked with in this era.” 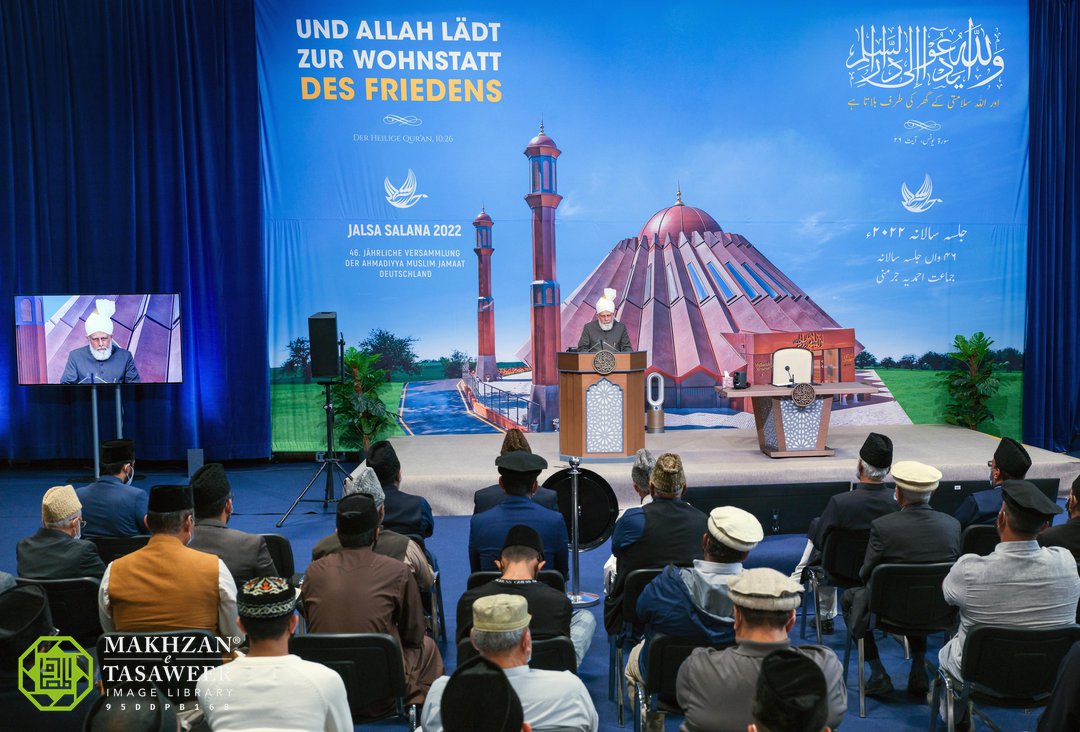