On 15 May 2022, the World Head of the Ahmadiyya Muslim Community, the Fifth Khalifa (Caliph), His Holiness, Hazrat Mirza Masroor Ahmad held a virtual online meeting with female members of the Waqf-e-Nau Scheme aged 15 and above from the UK.

His Holiness presided the meeting from MTA Studios in Islamabad, Tilford, whilst the Waqf-e-Nau gathered at the Baitul Futuh Mosque in Morden. 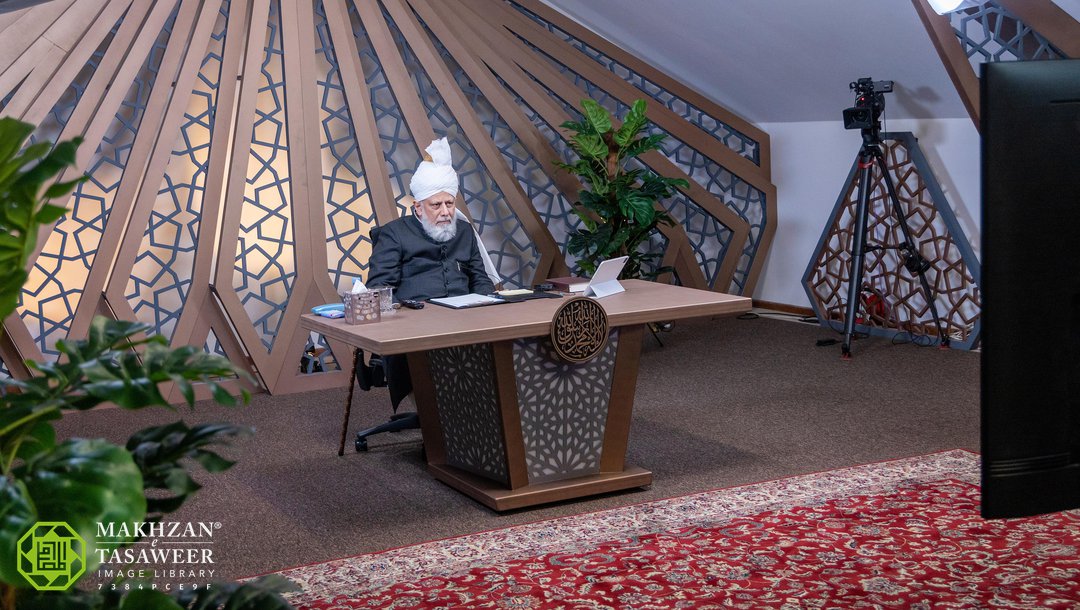 One of the Waqf-e-Nau Lajna members asked His Holiness how His Holiness feels when he sees Ahmadi Muslims at gatherings waving at him, feeling overjoyed.

“When you are happy then I too similarly become happy and I wave back! So, I feel the same joy as you when I see all of the sincere and loving Ahmadi Muslims in front of me and who are all loyal to Khilafat.”

Another attendee mentioned that gender norms change over time and asked His Holiness about the Islamic position on the matter.

“The Holy Prophet Muhammad (peace and blessings be upon him) mentioned that men should appear like men and vice versa and that a sign of the end times will be that the differences of appearance between men and women will diminish, their senses and preferences will change and people will not fulfil their obligations. So today we are seeing such things are becoming commonplace. We see that there is a trend and push towards changing of one’s gender as well…. When times change like this and there is immorality, then Allah the Almighty sends His chosen messengers and His loved ones, in order to bring about a positive reformation in the world and in this era, the Promised Messiah (peace be upon him) has been sent for this purpose.”

Another question related to why it is the case that some members of the progeny of prophets and the righteous people deviate from the right path, despite being the recipients of prayers and seeing a righteous example before them. 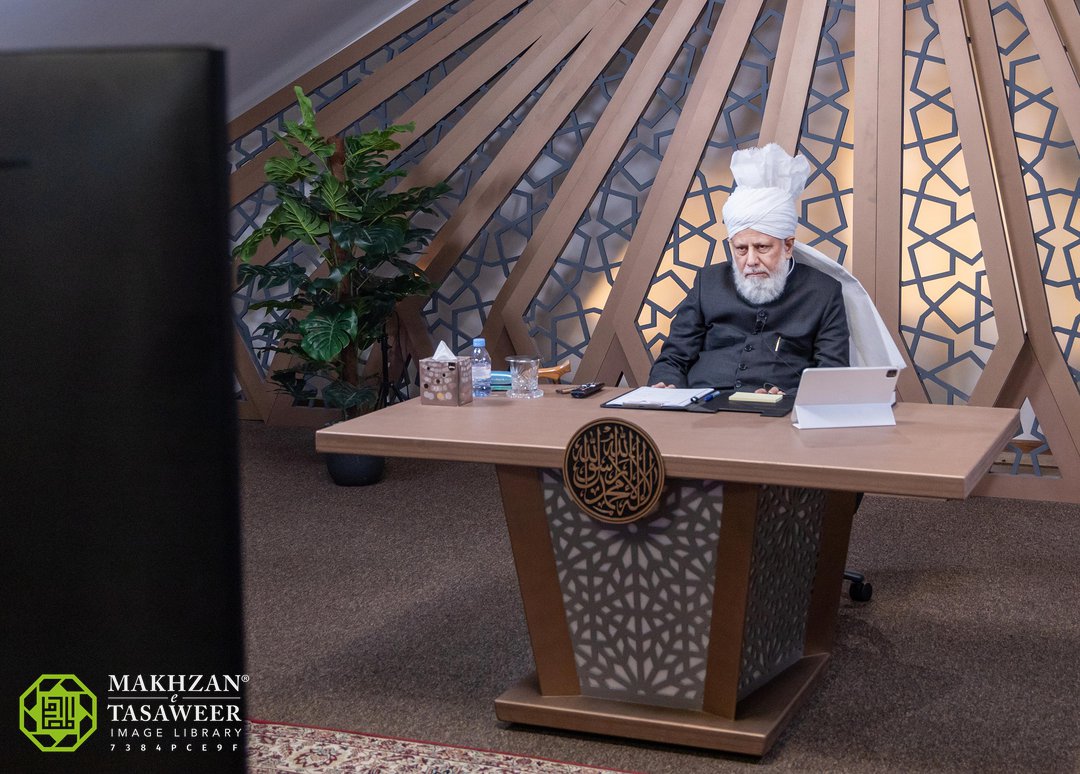 “Everyone is responsible for their own actions. The son of Prophet Noah (peace be upon him) did not believe in him, so Allah punished him and he drowned. The Holy Prophet (peace and blessings be upon him) said to his daughter, ‘O Fatima! Do not think that because you are the daughter of a prophet, you will therefore be forgiven. Rather, your own actions will take you towards forgiveness.’ The prophets and the pious people certainly do set their own example for others, but if someone does not follow their examples due to their own stubborn nature and if they refuse to take lesson from their example then Allah the Almighty will deal with them accordingly. Allah does not look at whether someone is the child of a pious person. Allah sees that individual’s actions only.”

“It is the law of nature that if you commit harmful actions then you become a bad person. However, it is generally seen that those who are pious and those who pray for their children, whether they are the prophets, the truthful, the pious or the martyrs, if they are pious and are praying for their children and they beseech and cry to Allah for this reason, then usually it is the case that their progeny is better. There are however a few examples where they become evil.”

A Waqf-e-Nau member asked His Holiness for advice on how Ahmadi Muslim girls can stay firm upon their religious beliefs in a time where ‘cancel culture’ may hinder people from expressing their faith.

“You are the people who are to bring about a positive change and (moral) revolution in society. There are so many of Waqfat-e-Nau now that now you should already be bringing about a real change for the better in society. So, we should not come under the pressure of others and just follow the latest trends for the sake of it… People nowadays have moved away from religion and they make fun of faith. In fact, they even make fun of the prophets. That is why there was a time when a few years ago they made caricatures and cartoons of the Holy Prophet Muhammad (peace and blessings be upon him) and mocked him and made foul statements about him. Even now there are those who are disrespecting the Holy Quran. In Sweden and Denmark there is a man who is insulting the Holy Quran and Islam and in France there are restrictions against Islam. There are other countries too who see Islam in a negative light. Also, most regrettably, the Muslims have done such actions which have resulted in the mockery of Islam because their actions have been influenced by wrongful traditions which have been labelled as ‘religion’ [but have nothing to do with it.]”

“So, we as Ahmadi Muslims in such circumstances are the ones who are to enlighten mankind about the true teachings of Islam, as we have the right knowledge of Islam and if we also have secular knowledge then people will listen to us. When you speak to others, people will acknowledge that, ‘this person is well educated and is not ignorant. This person speaks scientifically and has a scientific and philosophical approach to things and presents arguments based upon that and presents evidence.’ They will not then mock you or fail to take you seriously. Some people who are stubborn will mock you but others generally will not, even if they avoid you. If they mock you, then others will rise from amongst them who will say, ‘making fun of people is wrong’ and so gradually such people will come who will listen to you. So, we have to see how resolute we are and how consistent we are in fulfilling our task and we must never become afraid or stop our work.” 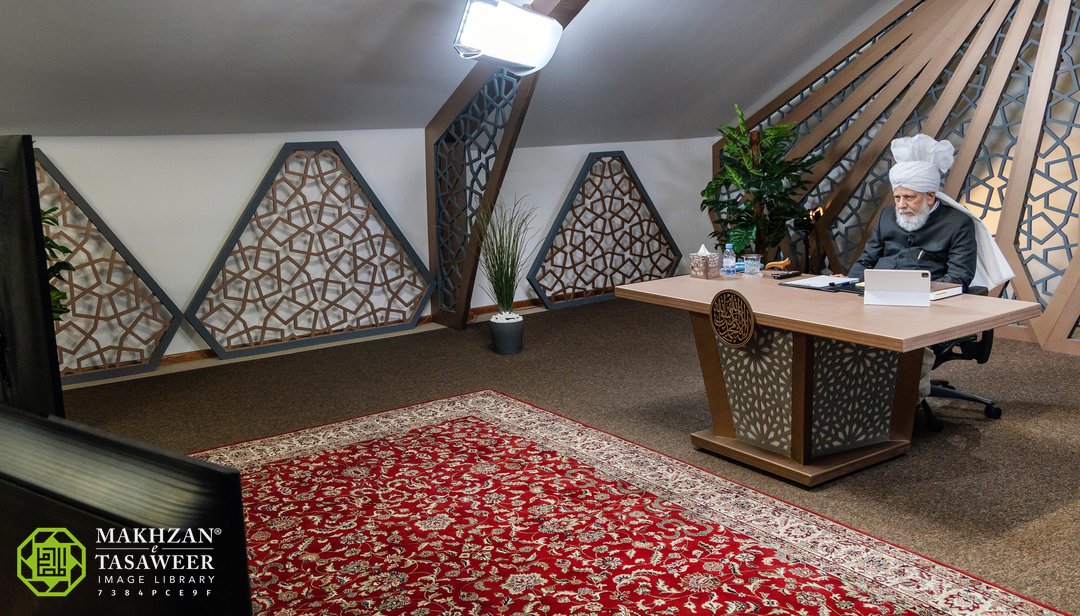 Another questioner asked how vegans can be convinced that eating meat is not wrong.

“We understand that Allah the Almighty has said that we should have a balanced diet by eating meat and vegetables. If someone does not like to eat meat, then they do not have to eat meat. If people think it is wrong to slaughter an animal, then we should also refuse to breathe and drink water because there are living organisms that die when we drink water or breathe. When we plant vegetables, insects die because of that too. If it is injustice to [eat meat] then we are also eating vegetables. So, eating an animal directly or taking a life indirectly, the result is the same. We are taking a life in any case.”

“You should tell them that the teaching of Islam is balanced. It does not say that you should only eat meat, or only consume vegetables. We should be eating both and have a balanced diet and that is what the nutritionists advise too, that eating a balanced diet fulfils the needs of the human body. Otherwise, how many people are part of this kind of movement? The majority of the world is eating meat and vegetables. People do not leave anything! So, we do not really need to convince anyone. There is no need to get into arguments on this. There are many other topics where you can have discussions with people and preach to them rather than occupying yourself with debates on small differences. These things should not hinder us in delivering the message of Islam to people. You can tell people that if they want to eat vegetables then they can do so, but they should come towards Allah and fulfil His rights and learn the faith. When they learn the faith and fulfil the obligations of God then people who join movements such as the vegan movement because of following a trend, they will stop.” 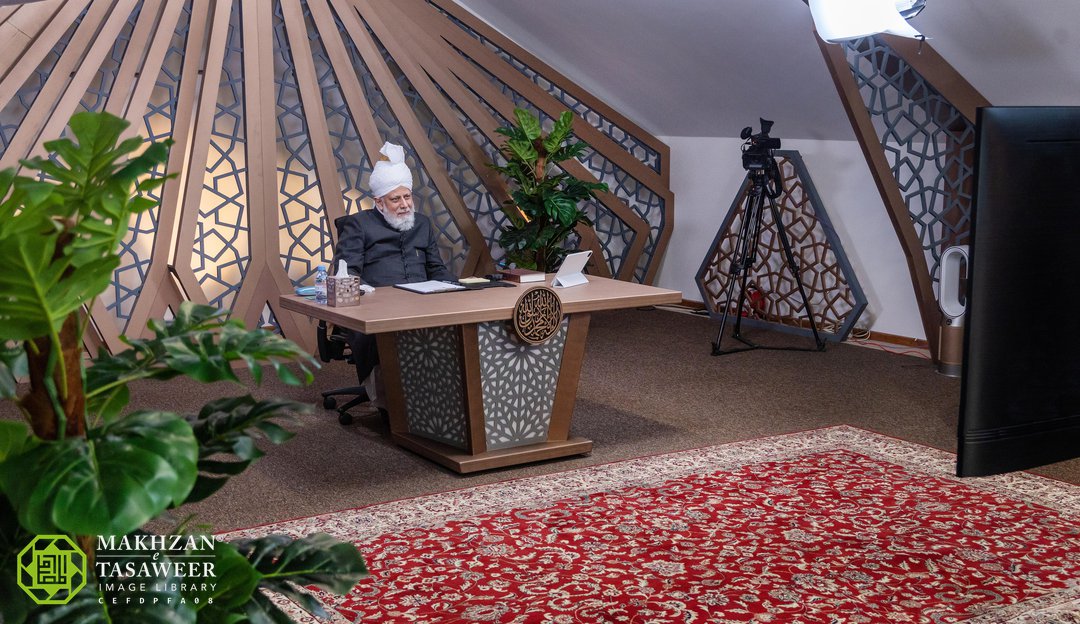 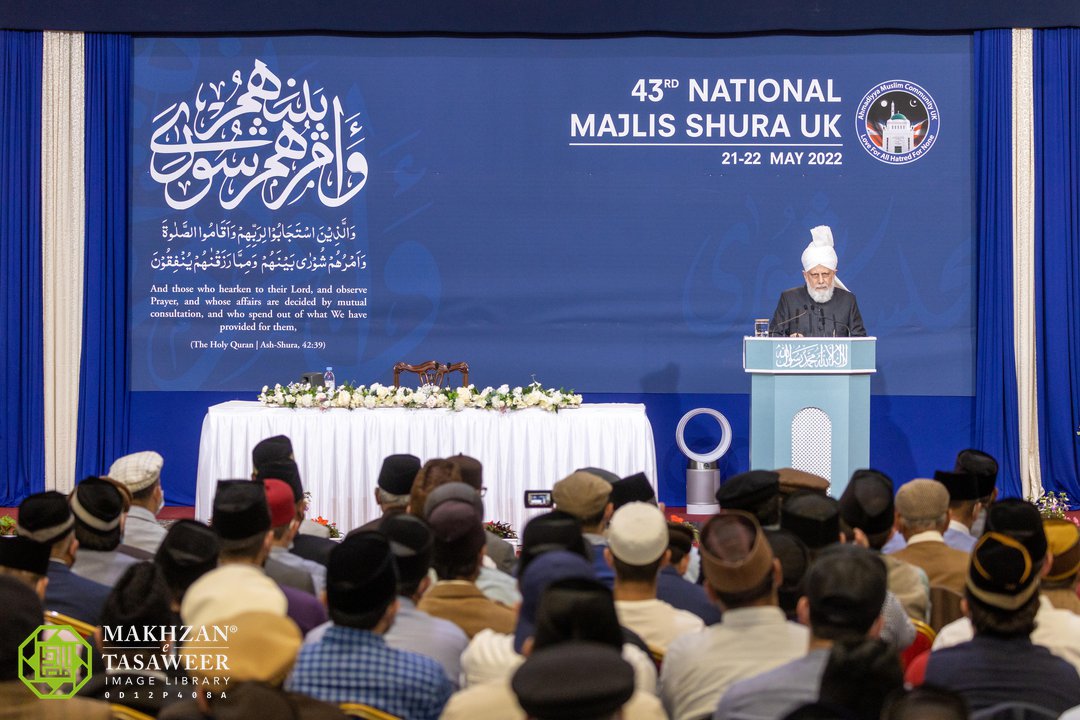