“Our work is to spread the message of true Islam – of love, peace and harmony” – Hazrat Mirza Masroor Ahmad

His Holiness presided the meeting from MTA Studios in Islamabad, Tilford, whilst more than 150 male and female members pf PAAMA gathered at the Baitul Futuh Mosque in London.

Following a formal session starting with recitation of the Holy Quran, members of PAAMA had the opportunity to ask His Holiness a series of questions regarding their faith and contemporary issues. 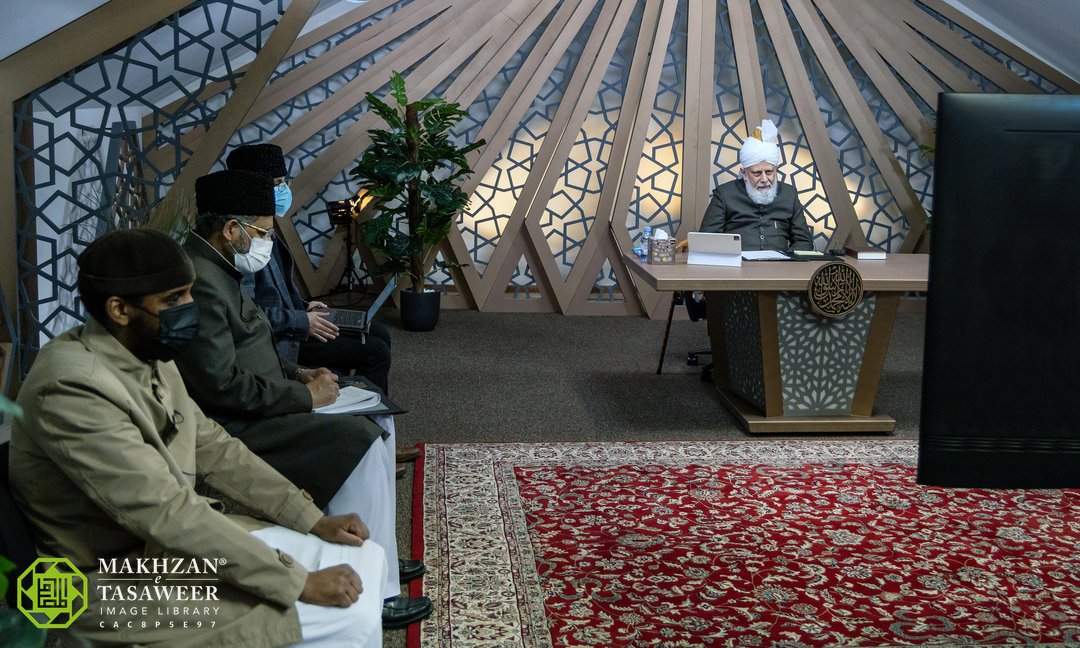 One lady referred to chapter 64 verse 15 of the Holy Quran which states, “O ye who believe! surely, among your wives and your children are some who are your enemies, so beware of them. And if you overlook and forgive and pardon, then, surely, Allah is Most Forgiving, ever Merciful.”

She asked His Holiness why husbands had not been included in this verse.

His Holiness highlighted that the Arabic word translated as ‘wives’ is ‘azwaj’. His Holiness pointed out that the word actually means ‘spouses’ and is translated as both, ‘wives’ and ‘husbands’ and so the verse in actuality refers to both.

“The Holy Qur’an here has used the words “azwajikum wa auladikum”. And the word ‘Azwaaj’ only does not mean ‘wives’. In my view ‘azwaaj’ means ‘husband’ and ‘wife’ both. If the husband is not good, you have to be very much careful and vigilant and beware of their activities if they are doing something against Islam and the Ahmadiyya Muslim Community. So, this is my view…The Arabic word used is ‘azwaaj’ and that means ‘spouse’. ‘Spouse’ includes both…Hazrat Khalifatul Masih IV (rh) was also of this view that ‘azwaaj’ means ‘spouse’. And he has translated it in his Urdu translation [of the Holy Quran] not ‘wives’ but ‘spouse’. So [the translation should be] your ‘spouses and your children’.”

Another questioner asked that many people have lost loved ones or are going through financial difficulties in these unprecedented times of natural calamities. She asked how a person can remain resolute in Allah the Almighty during these times.

“When you have more work and you are absorbed in your worldly activities and busy in your business and other jobs then normally it is seen that you don’t pay full attention to your prayers. So I take it the other way round. Nowadays, since people have lost their jobs there are some problems. Whenever a person is in trouble they try to bow before Allah the Almighty more than before. So you say that ‘how can one remain resolute to Allah the Almighty?’ This is the time that you pay full attention towards Allah the Almighty. Observe your prayers on time and pray to Allah the Almighty that He removes all these problems and you come out from this difficult time. So in my view you should be more resolute than before.”

“Generally what we experience in this world is that those people who are worldly and are involved in worldly things, normally they do not pay attention to worship Allah the Almighty. This is why atheism is increasing in this Western world. Because they think that what they are doing is because of their abilities, their education, their knowledge, and their better financial positions…Rather, it is the poor people who pay more attention towards Allah. Now if you think that this is the time when you are in trouble, then pray to Allah the Almighty that He removes all your problems and then also promise that whenever your conditions comes to normal you will never leave offering fervent prayers. So this is the time that you bow before Allah more than before.”

Another attendee mentioned that the African continent is marred by wars and coup d’état. He asked what His Holiness’ advice is to the African leaders regarding present situation.

“Which part of the world is now free of these things? Not only Africa, everywhere in the world we can see now Europe is also marred in it. Now the situation in Europe is more dangerous than in Africa because this situation (in Europe) can encircle whole of the world. I have been saying this for a long time, that for peace of the country and the society, you need justice and absolute justice. Until and unless our leadership is honest and [unless they] do justice to their work, to their people, we cannot maintain peace in the society and these things will continue. Wherever you see that the leadership is good and they are honest with their people, those countries are flourishing or developing to some extent. But unfortunately, not only in Africa, in Asia even, there are quite a number of countries – even in Europe now – we can see that the leadership is not honest.” 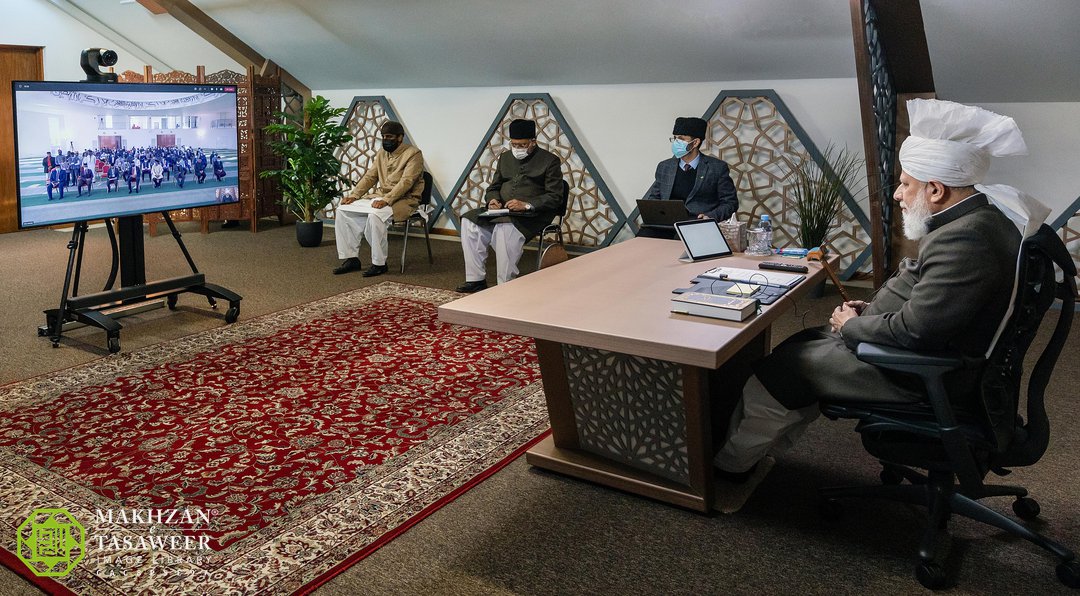 “We pray and we ask the leadership to be honest and recognise their Creator. They must recognise their Creator and believe in this that all their deeds are being seen by God the Almighty and whatever they are doing, they will be answerable for it – if not in this world, in the Hereafter. So we have to make them realise that there is One God and don’t think that this is the only world. In the Hereafter you will be answerable for all your deeds and whatever the responsibility you have been entrusted, you will be answerable for it and if you are not discharging your duties properly then Allah the Almighty will punish you. So this is the only thing which can reform them…We can only pray, or make the effort to convert whole of the country or the continent into True Islam. Then as you have heard during the recitation of the Holy Quran (Chapter 3 verse 104), you will be one nation, one people, and be honest with each other and discharge your duties towards each other and discharge your duties towards Allah the Almighty. This is the only solution, otherwise there is no hope of any reformation.”

Another question related to the persecution of the Ahmadiyya Muslim Community in certain countries such as Pakistan. It asked why Ahmadi Muslims do not fight defensively against those who persecute them.

“Our work is to spread the message of true Islam – of love, peace and harmony. What we are gaining through this message is more than what we can achieve by fighting with each other. What shall we gain by fighting? You see, those Pakistani Ahmadi Muslims who have come to join the Ahmadiyya Muslim Community, they are from among those people; they have the same mentality, same psyche. But, despite that, when they accept the Ahmadiyya Muslim Community, they say now the teaching of Islam Ahmadiyyat is that you should show patience and bare all these atrocities being committed against Ahmadi Muslims by opponents. So, this is why. The Promised Messiah (peace be upon him) has said that since the Holy Prophet (peace and blessings be upon him) also prophesied that during the time of the Promised Messiah (peace be upon him), he and his Community will face all the atrocities but you should tolerate them. So this is why we are not retaliating. Otherwise we can retaliate. But, what will happen? We shall shatter the peace of the country which is already in danger.” 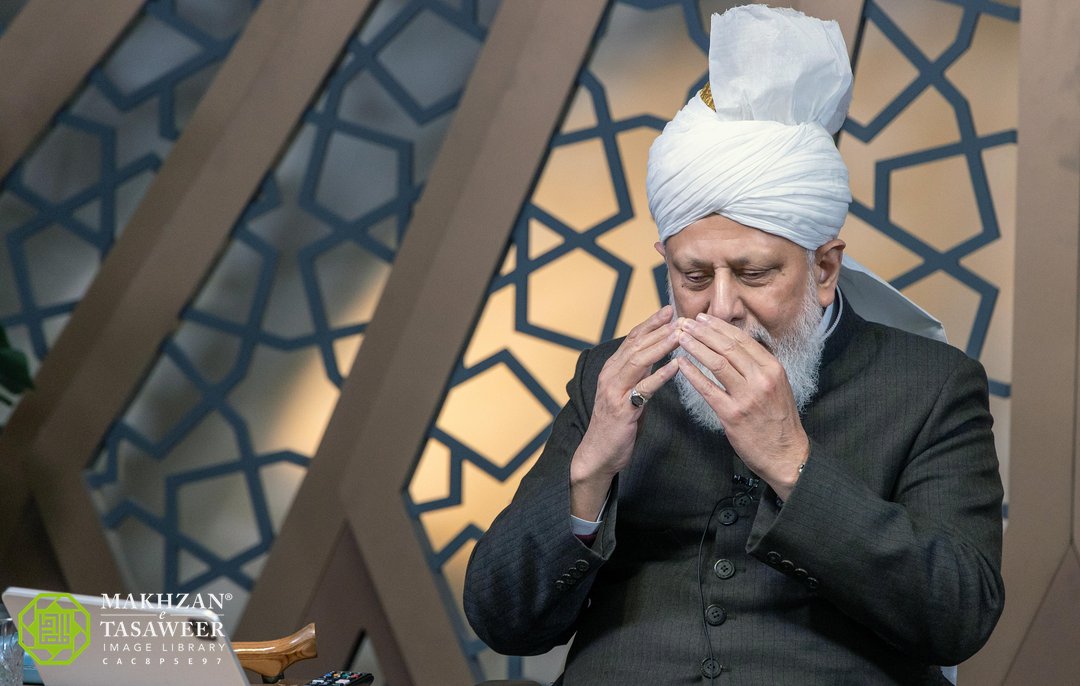 Hazrat Mirza Masroor Ahmad narrated a question that was asked to the Third Khalifa of the Ahmadiyya Muslim Community, Hazrat Mirza Nasir Ahmad and said:

“Once a person said to the Third Khalifa that, ‘permit me that I can organise some group and use some petrol bombs and other bombs and create disturbance in the country [against the persecution of Ahmadi Muslims].’ He said that, ‘yes, you can do it, but Allah the Almighty will then say ‘ok, now you and your opponents do whatever you like and I am leaving you.’’ If Allah the Almighty leaves us then we don’t have any safe place. So, it is better to follow the commandment of Allah the Almighty that during the time of the Promised Messiah (peace be upon him) we should spread our message through love, peace and harmony and show patience. This is why we do not fight. otherwise we have the power to fight.” 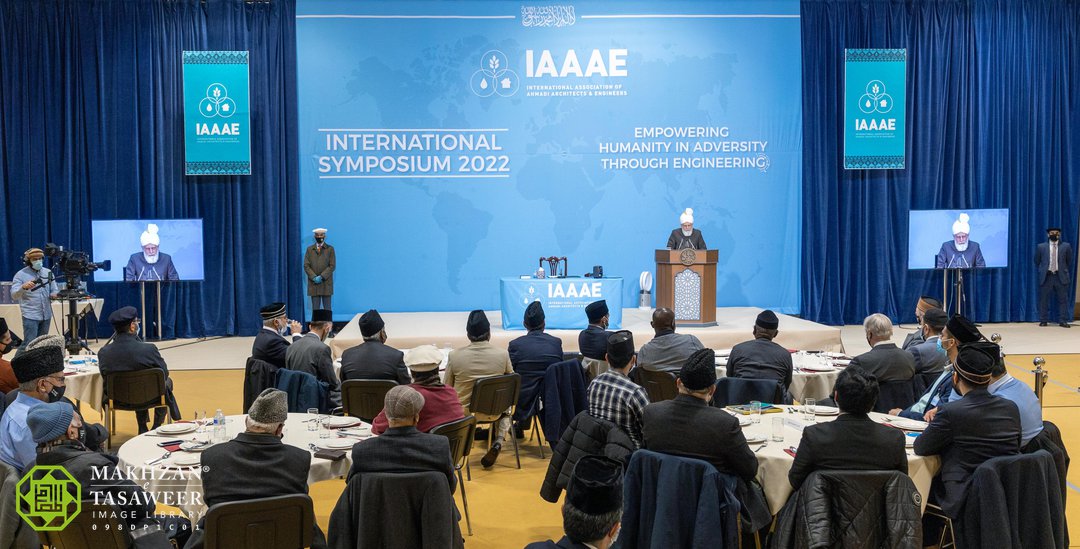