“Office bearers should consider themselves to be servants, not officers” – Hazrat Mirza Masroor Ahmad

His Holiness presided the meeting from MTA Studios in Islamabad, Tilford, whilst more than 100 local presidents as well as the National Amila members and regional presidents joined the meeting virtually from the Baitul Futuh Mosque in London.

During the meeting, which began with the recitation of the Holy Quran, the local presidents had the opportunity to ask questions and seek His Holiness’ guidance on a range of issues.

One of the attendees asked His Holiness for advice on dealing with issues that arise when young members of the community are seeking marital matches.

“On many occasions, I have said to the auxiliary organisations (of the Ahmadiyya Muslim Community) that the Holy Prophet Muhammad (peace and blessings be upon him) has said that you should prioritise a person’s faith and righteousness when seeking a matrimonial match and so we should pay heed to this. There is a need for moral training towards achieving this. Activate your Tarbiyyat department within the Community. Lajna Ima’illah and Khuddamul Ahmadiyya should also do so. This will create an atmosphere of piety. Only then can we say that as a result of the Tarbiyyat, an atmosphere has developed in which both the men and women are seeking marital partners based on righteousness.”

Another question related to the conduct of those who hold some office within the Ahmadiyya Muslim Community’s national, region or local structure.

“The office bearers should always serve with the realisation that the Holy prophet (peace and blessings be upon him) has said that, ‘the leader of a people is their servant.’ The office bearers should consider themselves to be servants, not officers. Sometimes members inform me that they have been given a certain office and so I tell them that they should say that they have been given an opportunity to ‘serve’ instead. You have all been given the opportunity to serve and so you should benefit from it in the right way and try to fulfil your responsibility in order to attain the pleasure of Allah the Almighty.”

Advising them of the importance of developing compassion for the members of the Ahmadiyya Muslim Community, Hazrat Mirza Masroor Ahmad said:

“You must cast your eyes upon what Allah desires from you. We have all been made brothers to each other. The Holy Quran states [about believers] that they are ‘Tender among themselves’. So you should treat each other with kindness and compassion. An office bearer should always bear in mind that they must treat people with tenderness and kindness and they must win the trust of the people.”

Another question related to how a president can better engage with those who are inactive in the activities of the Ahmadiyya Muslim Community.

“You must deal with people sincerely as their friends. If someone does not come to the community activities or events, then do not go to them and tell them to come to the prayers or a gathering or to take part in financial sacrifice. Do not say anything of that nature to them. You should just call them and simply ask how they are. Gradually they will begin to come closer to you. Do not make any demands of them nor say anything of such sort to them. Only ask them how they are and find out about them. Or, if you are passing by their house and it is an appropriate time and they will not be disturbed, then pay them a visit and just say that you were passing by and thought to check in with them…If you keep a contact in this way, gradually people will become closer to you.”

“Our work is just to keep on reminding people of their (religious) duties and what are their responsibilities and what are their obligations being an Ahmadi Muslim. That is the only thing we can do and that is the only thing which has been asked to the Holy Prophet (peace and blessings be upon him) by Allah the Almighty, that keep on advising them and reminding them about what they are and being a true Muslim, what should be their duties. So, this is a continuous process. You should not just give up because in two or three meetings, or in some of your activities they did not take part or they are not very active in taking part in financial sacrifices or offering their congregational prayer or even coming to the Friday prayer. It is a continuous process and you have to be persistent and persuasive.” 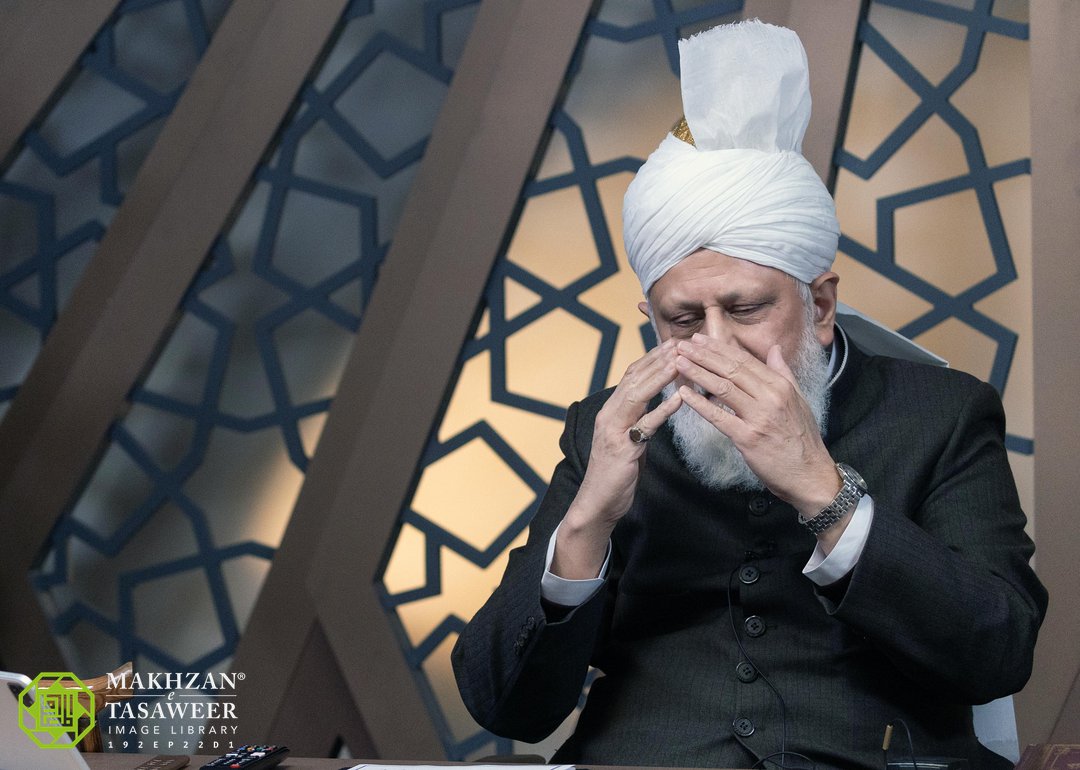 An attendee asked His Holiness what arguments can be used when speaking with atheists during outreach work at stalls which are setup to deliver the message of the Ahmadiyya Muslim Community.

“You can tell them that you believe in God and you have personal experiences of Allah the Almighty and you have signs of the acceptance of your prayers. You can tell them that Allah the Almighty fulfils the prophecies that were given by the prophets. The prophecies mentioned in the Holy Quran were fulfilled in the time of the Holy Prophet Muhammad (peace and blessings be upon him) and they continue to be fulfilled. In this era the Promised Messiah (peace be upon him) was sent as a servant of the Holy Prophet (peace and blessings be upon him) and he made prophecies which were fulfilled too. You can explain to them that after witnessing the fulfilment of these prophecies, you have no option but to accept that there is a Being Who informs of the unseen…”

“Other than that, when our own prayers are accepted, it makes us realise that there is a Being that accepted those prayers. Sometimes those prayers are accepted in exceptional ways and under seemingly impossible circumstances. So, there are personal experiences as well as the prophecies. If you speak of them, then the people will either listen to you or they will mock you and leave you. Upon such mocking demeanour, you should remain silent because you have fulfilled your obligation. It is up to Allah the Almighty to guide people and our task is only to convey the message. You should always bare this in mind. Allah the Almighty stated to the Holy Prophet (peace and blessings be upon him) that one cannot force anyone to become Muslim.”