“While you are bowing down and you are in Sajdah position, you should cry and seek Allah’s help. Then within months you will see change in yourself” – Hazrat Mirza Masroor Ahmad

His Holiness presided the meeting from the MTA Studios in Islamabad, Tilford, whilst more than 65 male and female converts to Ahmadiyyat joined from the Baitul Futuh Mosque in London. 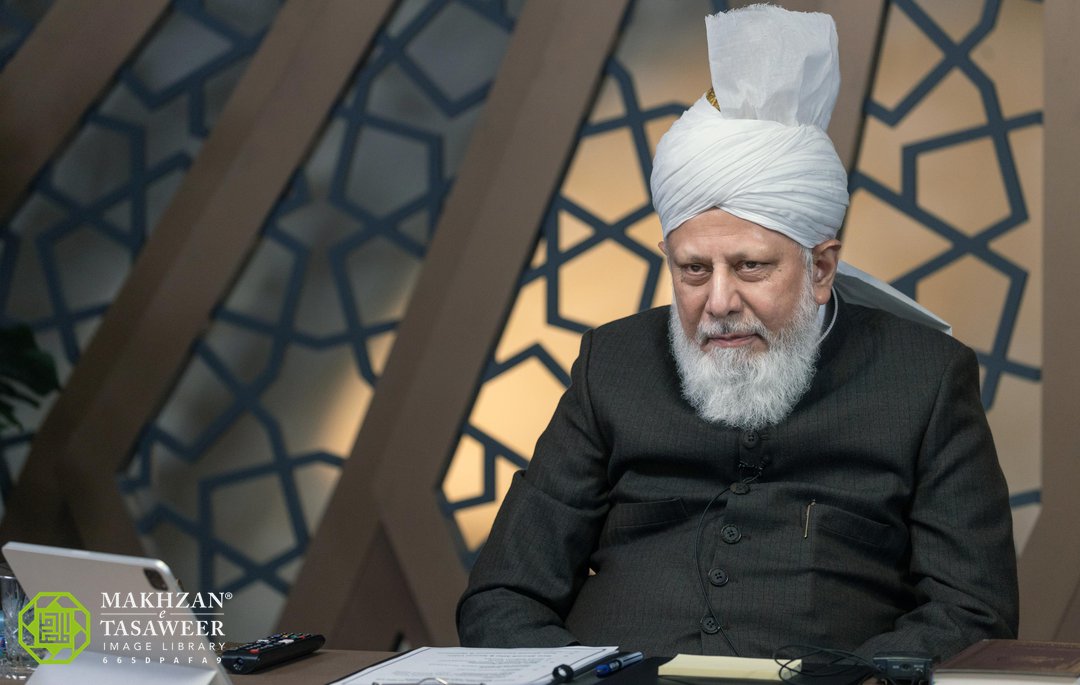 During the event, some members narrated their personal stories of why they joined the Ahmadiyya Muslim Community, whilst others had the opportunity to ask questions to His Holiness.

One of the attendees asked for advice on how to develop patience and overcome personal challenges.

“Whenever you feel depression or you feel upset, you should bow before Allah. Pray to Allah the Almighty in your prayers. Even if it is not prayer time, in your voluntary prayers (Nawafil) you should cry to Allah the Almighty that He enables you to overcome this situation and gives comfort to your heart and patience. This is why Allah the Almighty says in the Holy Quran, “Aye! it is in the remembrance of Allah that hearts can find comfort,” which means that for the comfort and patience of your heart, you have to remember Allah. So, this is the only solution now, and at the same time you should also try to make good friends who are helpful to you.” 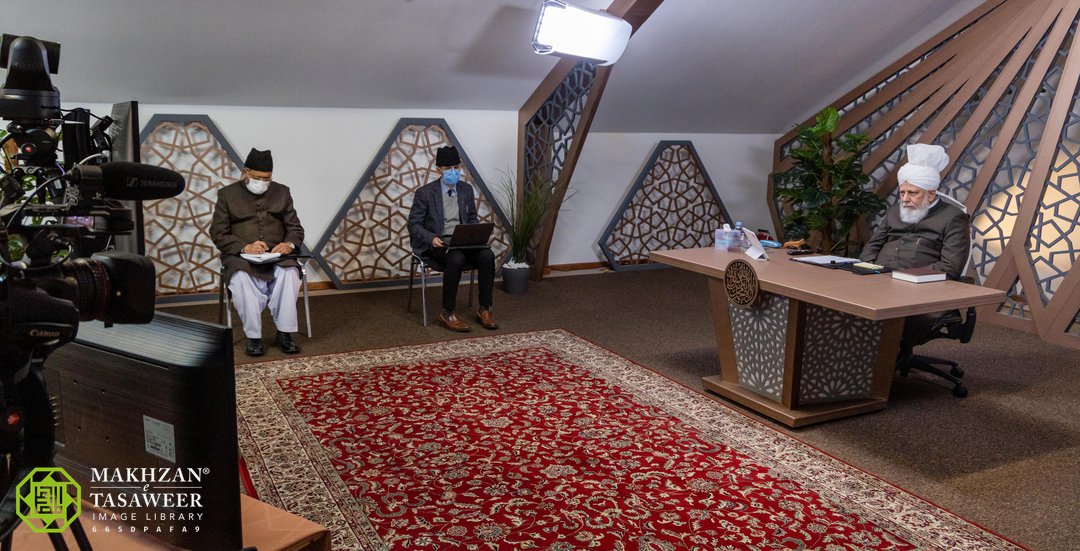 Another female attendee asked His Holiness that when women are taught in Islam to observe Hijab, what commandment is there for men in this regard?

“Before addressing women, the Holy Quran’s verse addresses the men and instructs them to keep their gaze low and not to stare at women. This is what should happen within a true Islamic society. When people’s morals become corrupted, when they lose religious values and become distant from their faith and become materialistic, then all it leaves behind are base worldly desires. Therefore, it is for the protection of women that Islam calls on women [to observe Hijab]… Similarly, the Holy Quran has even stated that, when speaking with men, Muslim women should have a level of firmness in their manner of speech and voice lest anyone derives the wrong message from a soft tone of speech.”

“The commandments of the Holy Quran are in accordance with human nature and are for the protection and safeguarding of women. They are not there to oppress them.”

Another attendee asked His Holiness what the major differences were between Ahmadi Muslims and other Muslims.

His Holiness explained that whilst the rest of the Muslims were awaiting the Messiah and Mahdi to come, Ahmadi Muslims believe that he has already come in the person of Hazrat Mirza Ghulam Ahmad (peace be upon him) who claimed to be the Promised Messiah and Mahdi. 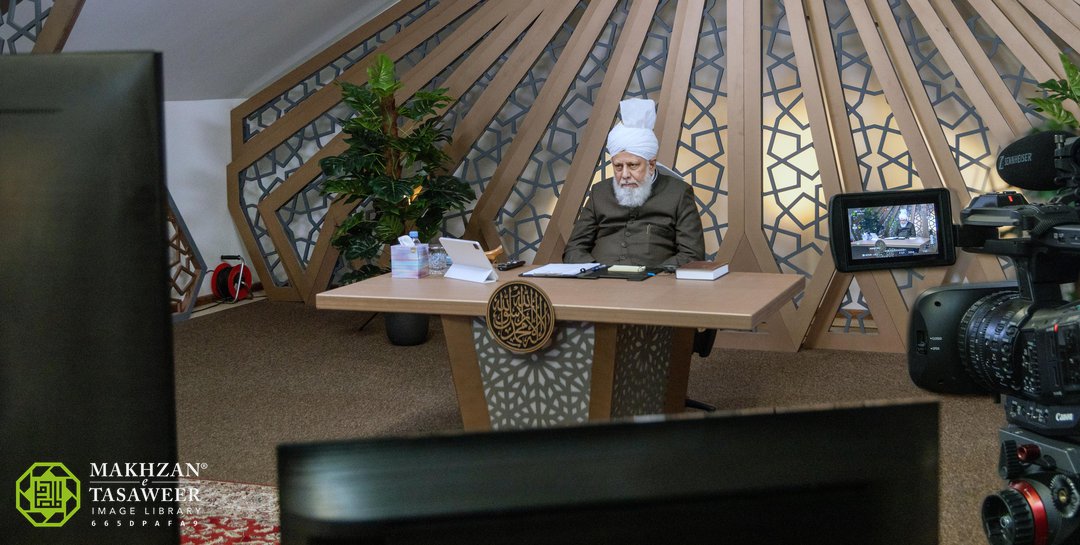 Explaining some of the signs of his coming and their fulfilment, Hazrat Mirza Masroor Ahmad referred to the eclipses that were foretold by the Holy Prophet Muhammad (peace and blessings be upon him) as a sign of the Mahdi’s coming. His Holiness said the eclipses occurred exactly as they were foretold in the years of 1894 and 1895 during the lifetime of Hazrat Mirza Ghulam Ahmad (peace be upon him).

Speaking of other signs too, Hazrat Mirza Masroor Ahmad said:

“There are some other signs also, that the old means of transportation and conveyance used during the time of the Holy Prophet (peace and blessings be upon him) will be abandoned. Today people are not using camels and horses for that purpose. Instead there are cars, and trains and aeroplanes and ships that are being used. The fundamental thing is that we believe that the person who was to come in the latter days to reform the world, and to strengthen the faith of the Muslims, and to reform them has come in the person of Hazrat Mirza Ghulam Ahmad. But non-Ahmadi Muslims do not accept him. We say that now the time has lapsed; the prophecy was that the person will come in the early 14th century, and there was the claim [of only Hazrat Mirza Ghulam Ahmad] at that time and signs have also been fulfilled.” 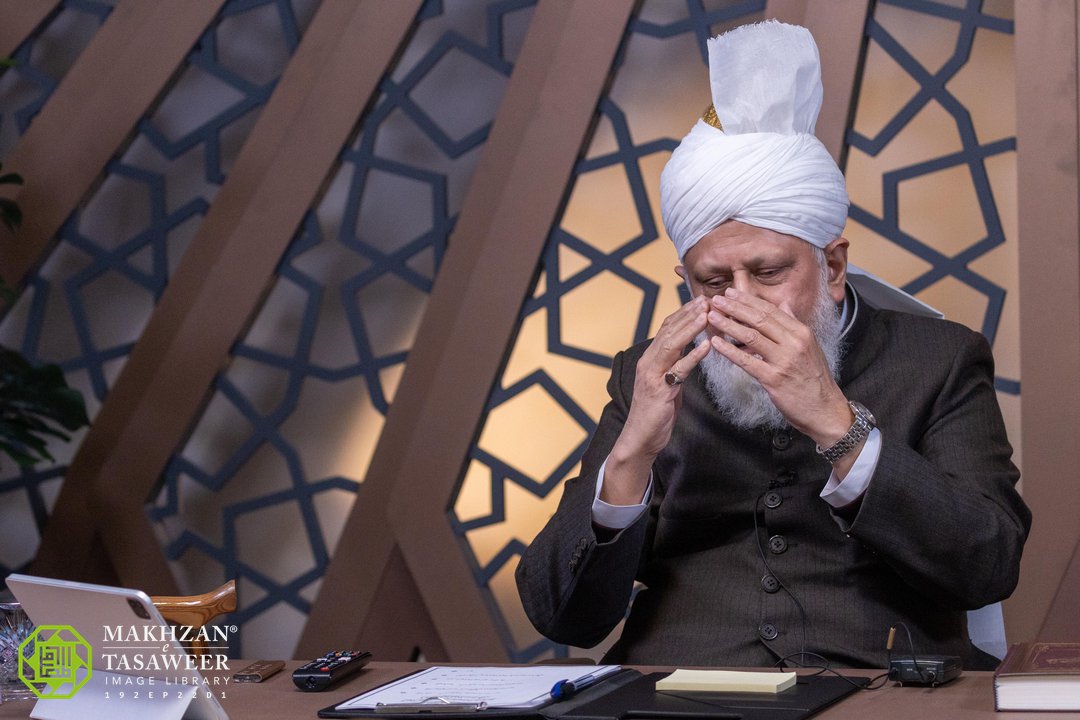 Another attendee asked His Holiness for advice for new converts on how they can build a close relationship with Allah the Almighty.

His Holiness advised that they should first learn the words of Surah Al-Fatiha, the opening chapter of the Holy Quran.

“Try to learn Surah Al-Fatiha in Arabic and then the meaning of it. You should also try to offer your five daily prayers and if possible, in congregation. Apart from that you should offer extra [Nafl] prayers. And pray to Allah the Almighty that He may give you the strength to be firm in your faith. Seek Allah’s help in this regard. Never ever leave any prayer. Make it a point that five daily prayers are obligatory and you have to offer them. Try to offer these prayers very fervently and while you are bowing down and you are in Sajdah position, you should cry and seek Allah’s help. Then within months you will see change in yourself.” 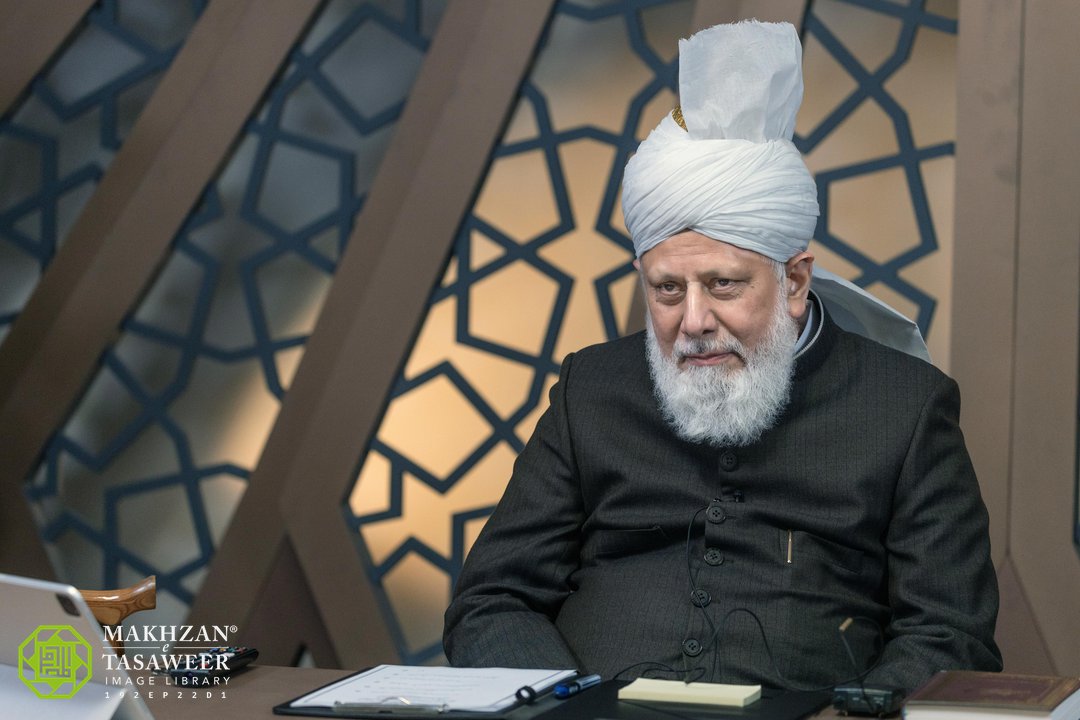