“ In this day and age, it is the job of the people from the Community of the Promised Messiah (peace be upon him) that they should tell the world what the true image of Islam is and what the reality is.” – Hazrat Mirza Masroor Ahmad

His Holiness presided the meeting from his office in Islamabad, Tilford, whilst the members of Majlis Khuddamul Ahmadiyya joined virtually from the Nusrat Jahan Mosque complex in Copenhagen. 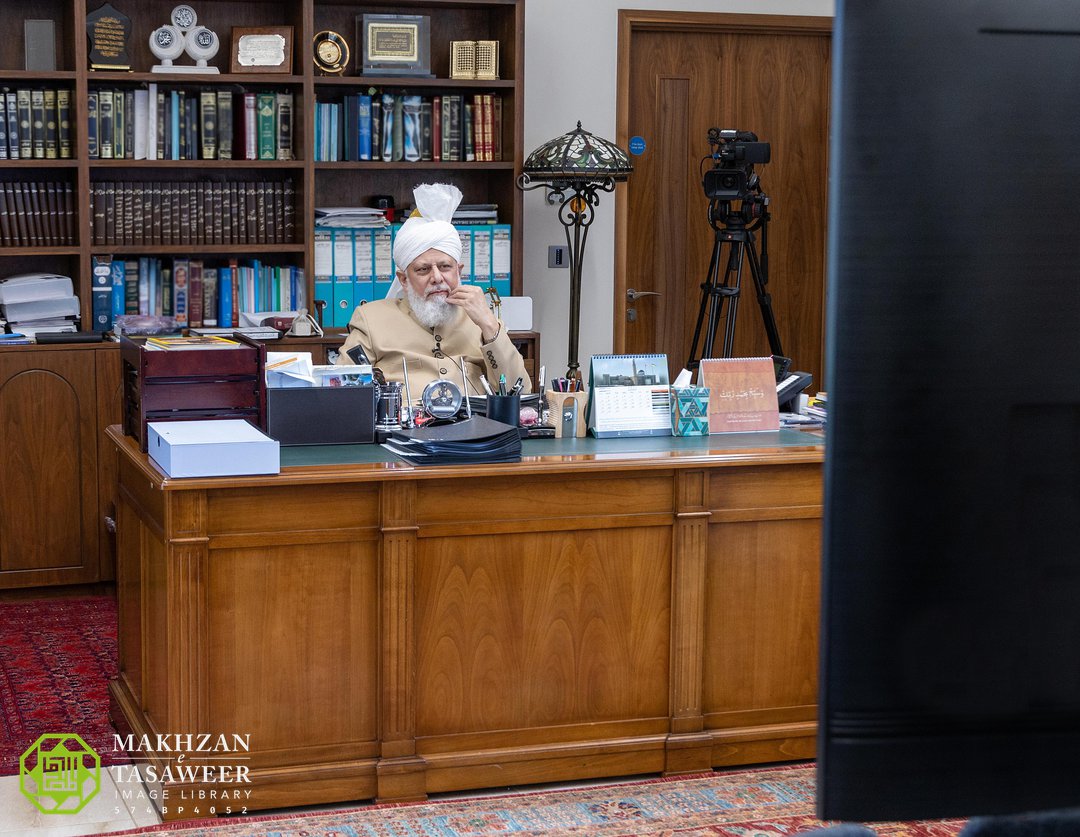 Following a short formal session starting with recitation of the Holy Quran, members of Majlis Khuddamul Ahmadiyya had the opportunity to ask His Holiness a series of questions regarding their faith and contemporary issues.

One of the Khuddam asked His Holiness about the best way of raising children in a non-Islamic society.

“It is imperative for parents to establish a bond of friendship with their children. It is necessary that your children feel comfortable to share everything with you regarding whatever is discussed within their schools or elsewhere. When your children raise anything with you, you should answer their questions and explain the matter to them, rather than shying away. It may be that sometimes you will feel a degree of embarrassment due to your Pakistani upbringing but you should respond to your children according to Islam’s teachings. There will be some matters where you will need to tell your children that though they have been discussed in their school, due to their tender age they should not concern themselves with such matters until they are older and more mature. Also, you should not make them feel as though they have done anything wrong.”

“Above all, you must firmly establish within your children the notion that they are Ahmadi Muslims, you must educate them about what the Ahmadiyya Muslim Community is – that it is the true Islam – and explain why we are Ahmadi Muslims and what are our objectives and aspirations. Where materialistic people seek only to fulfil their material desires, our objectives are much greater and so, from childhood, guide your children about the need to strive to fulfil these superior goals.” 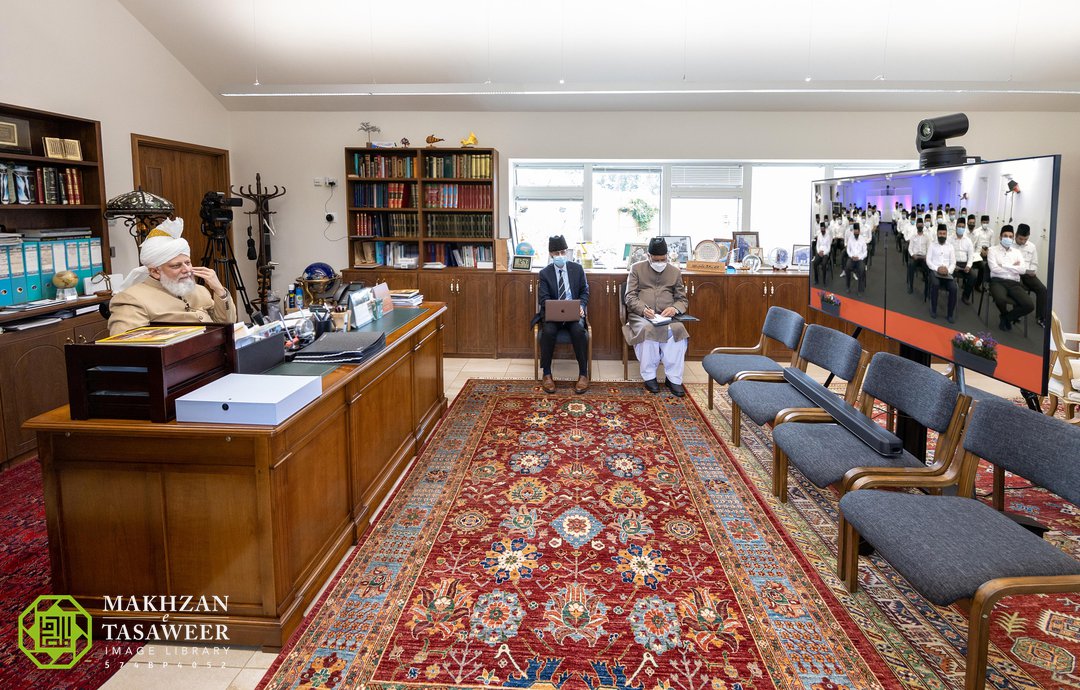 Another attendee asked his Holiness if there should be blasphemy laws within countries to stop people from abusing the Holy Quran or the Holy personages.

“Allah the Almighty is the One Who has established and protects the respect and honour of his Prophets and all that is sacred. The worldly laws make no difference to that… However, we must draw the attention of people towards what is real freedom. Having freedom does not allow you to start stealing money from the pockets of people. Freedom does not mean you can start to break into people’s houses and loot their property. It is not absolute. So, in order to establish peace, every citizen should be required to take care of the feelings of others. In a society where people’s feelings are cared for, automatically there will be an atmosphere of peace that exists and develops. When an atmosphere of peace and brotherhood is established, people will not play with the feelings of others.”

“Allah the Almighty has not established any punishment for blasphemy. However, Allah the Almighty does say that you should live as brothers and take care of each other’s feelings. If members of society were to act upon this fundamental principle, then all other problems would be resolved. Society should recognise the basic principle that people should not only focus upon striving to attain their own rights, rather they should fulfil their obligations towards others too – every citizen should realise this. This is the teaching that religion gives us.”

Another Khadim asked His Holiness how God Almighty communicates with his loved ones, especially with the Caliphs chosen by Allah the Almighty. 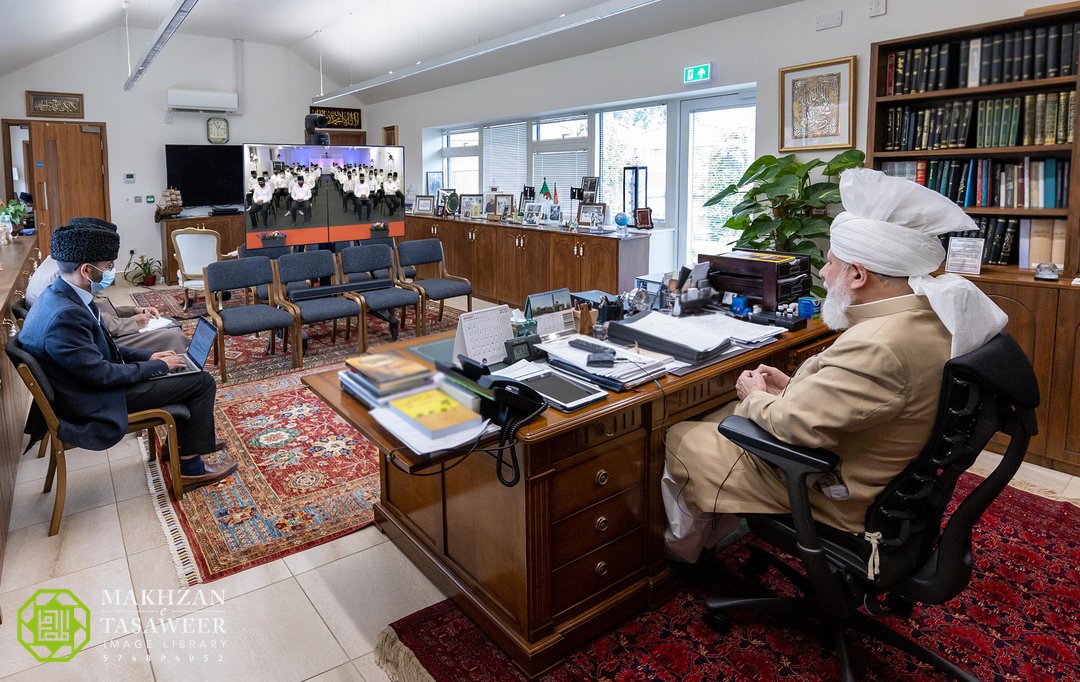 “Allah the Almighty has many ways of speaking to people. The Promised Messiah (peace be upon him) has explained this in great detail. If you read the book ‘Haqiqatul Wahi’ [The Philosophy of Divine Revelation], you will realise how Allah the Almighty does so. Sometimes, He communicates certain matters through dreams, and at other times He informs through visions and sometimes a thought is embedded in one’s heart and the issue becomes visualised in front of the person in their heart. Some are informed of certain matters through revelation itself. So, there are various ways and whatever Allah the Almighty considers to be the most appropriate to an individual [he does accordingly].”

“Allah the Almighty also creates the results of the actions as well because He is the one who gives the guidance. Sometimes, unbeknown to the person, he is being guided and he does not understand it. When he prays, a path suddenly opens up and when he treads upon that path, he begins to see success and then he realises that this was actually the will and desire of Allah the Almighty. So, in this way, there are several means of communication.”

“You cannot force anybody (to join the Ahmadiyya Muslim Community). Allah the Almighty even said to the Holy Prophet (peace and blessing be upon him) that although you should convey the message of Islam, you cannot impose your teaching upon anyone and you cannot compel anyone to follow you. This is why Allah the Almighty says, ‘There should be no compulsion in religion. Surely, right has become distinct from wrong.’ Though what is right has become distinct from what is wrong, you cannot force it. You convey the message and if others accept, then well and good. If they don’t accept, then pray for them that Allah the Almighty guides them.” 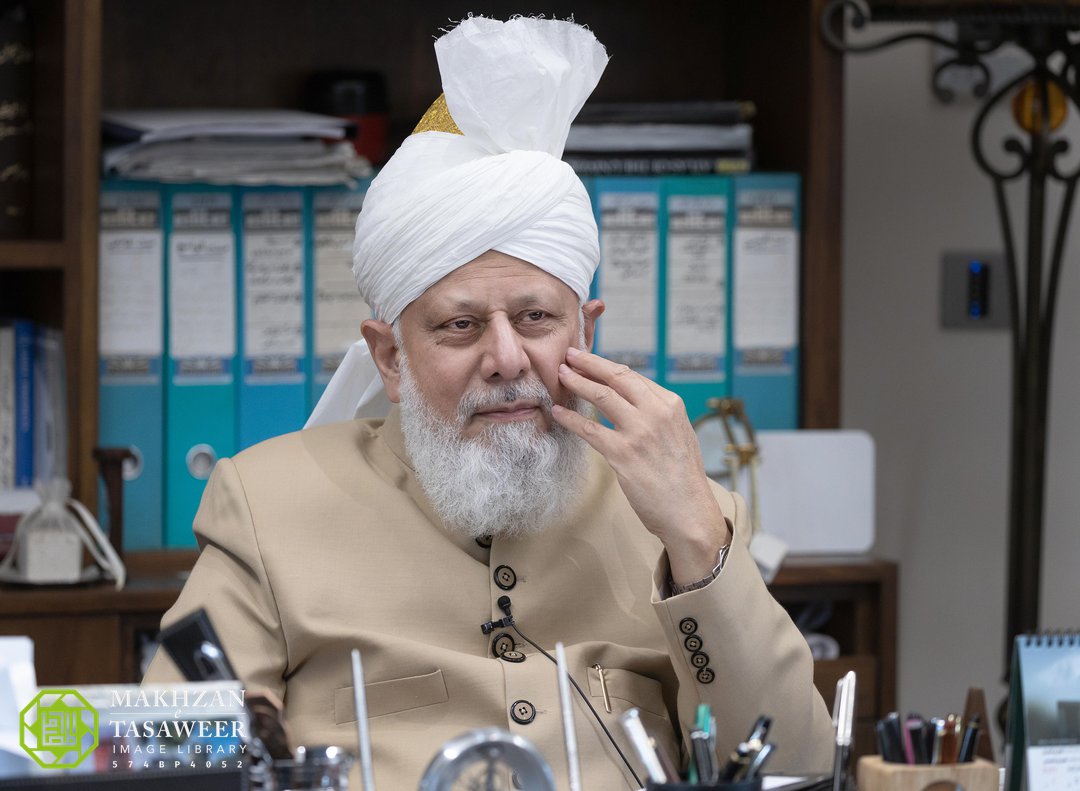 Another participant asked His Holiness how Allah the Almighty can be ‘Gracious’ and ‘Merciful’ when young children are born with diseases or innocent people develop mental health illnesses, such as schizophrenia.

“An illness arises because of some reason; whether it be because of some physical cause after the child is born or before birth. Sometimes an illness can even develop due to one’s environment and circumstances. So, the law of nature is in action. If you go in an area full of malaria and you are being bitten by mosquitos, then the result will be that you will contract malaria, unless you are using anti-malarial medication. In fact, even if sometimes a person takes medication he can still contract malaria. So, should we then ask, ‘Why are children developing malaria despite the fact that they have not caused harm to anyone?’”

“Similarly, there are certain mental health related illnesses, such as schizophrenia or depression which develop as a result of certain circumstances. The graciousness of Allah the Almighty is that in such a situation, if those who are afflicted do something wrong then Allah the Almighty does not punish them for their sins… Allah the Almighty has said that many of His rewards will be granted in the life to come. When rewards are to be granted in the Hereafter, then who knows that the person who you consider to be in a very poorly state in this life, he might be in an even better situation than you in the Hereafter in Heaven, even if you are the one who is able to offer prayers. So, this is the Graciousness, Mercy and forgiveness of Allah the Almighty.”

Another attendee asked His Holiness why the media was constantly attacking Islam and presenting it in a negative light.

Hazrat Mirza Masroor Ahmad explained that the media is not aware of the true teachings of Islam and so when they see the wrongful actions of terrorist organisations and extremists, they presume it to be a depiction of Islam, whereas it could not be further from the truth. His Holiness said that the people working in the media need to be reached out to in order for them to be informed of the true image of Islam.

“In this day and age, it is the job of the people from the Community of the Promised Messiah (peace be upon him) that they should tell the world what the true image of Islam is and what the reality is. So, this is your responsibility and duty. Why is it that you have not yet taken the true message of Islam to every single person in your country and taken this message to every person that works in the media and why you have not written columns in the newspapers?”

His Holiness went on to say that Majlis Khuddamul Ahmadiyya should reach out to the media and write articles and letters to editors that are published in the news in order to correct the image of Islam. His Holiness said, “do not let any opportunity slip form your hands” to inform people of the peaceful message of Islam.

“So, convey the message of true Islam to the media so that they can no longer criticise it or raise false allegations. Establish a relationship with the media and inform them. You should engage with them, invite them to your functions and develop a relationship so that they are willing to publish your articles. They will then see the truth for themselves. Otherwise, if the media sees only the wrongful actions of certain so-called Muslims then of course they will tell the people about that. Certainly, when we do inform them of the true teachings of Islam, they acknowledge that they have made a mistake (in their previous reporting). Many people in front of me have said this and then they go on to write in support of Islam.”

“Denmark’s Majlis Khuddamul Ahmadiyya should try to become a role model for other chapters of Majlis Khuddamul Ahmadiyya around the world. Secondly, you should distribute literature about Islam in large quantities in Denmark. If your population is five million then every year you should distribute 250,000 – 500,000 leaflets every year. If Majlis Ansarullah also distribute 250,000 and Lajna Imaillah also cover 200,000 or 250,000 then almost a million people within a year can be reached and so, within 6 years you can inform the entire population of Denmark about the true teachings of Islam. So far, not even 5% of the people know what the Ahmadiyya Muslim Community is.” 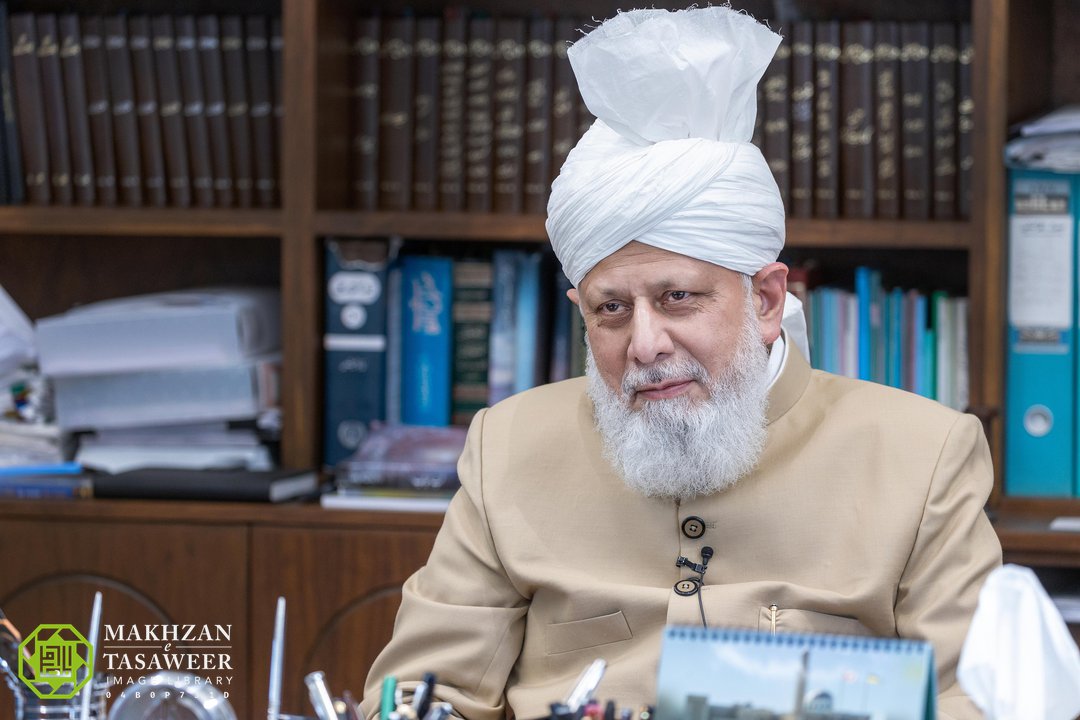