“Remember, Allah the Almighty has not given any guarantee that just because we have verbally accepted the Promised Messiah (peace be upon him) that we will be saved, rather it is necessary to fulfil the conditions of our Bai’at…” – Hazrat Mirza Masroor Ahmad

His Holiness presided the meeting from his office in Islamabad, Tilford, whilst the Amila members joined from the Noor Hall at the Noor Mosque complex in Wigoltingen.

During the seventy minute meeting, the National Amila members had the opportunity to present a report about their respective departments and to receive the guidance and instructions of His Holiness on a range of issues.

Whilst speaking to the National Tabligh (Outreach) Secretary, His Holiness said that every effort should be made to convey the true message of Islam to the people of Switzerland.

“Much greater efforts are required by our members to spread the message of Islam in Switzerland. It is sometimes said that Swiss people are not interested in religion but if a sincere and concerted effort is made, I believe that there will be people who will be attracted by our message and come to accept Islam in Switzerland, God Willing.” 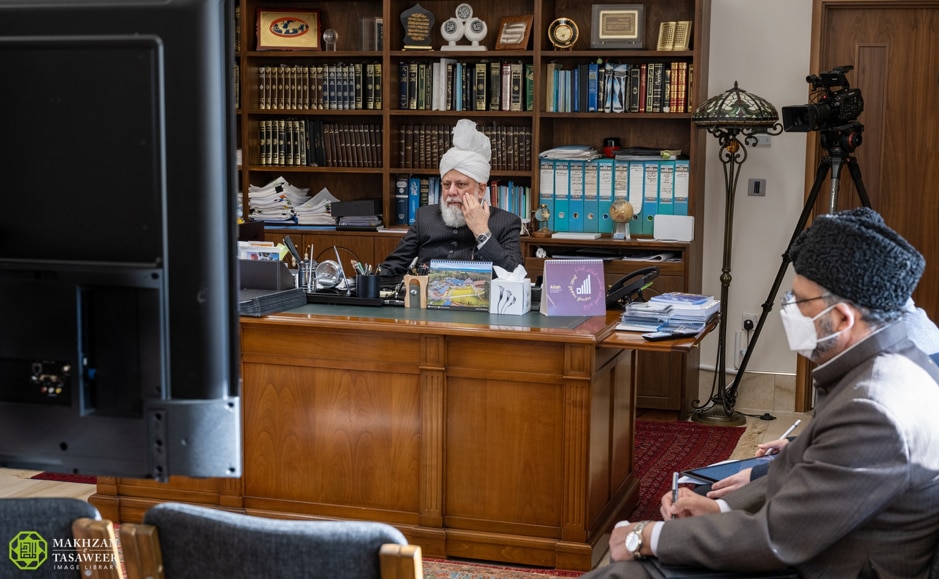 Given how Islam is often misrepresented in the media and how its teachings have been violated by extremist individuals or groups in recent years, His Holiness said it was important for the Umoor-e-  Kharija (External Affairs) Department to reach out to people in positions of influence.

“The Ahmadiyya Muslim Community should have close contact with the leaders and politicians in Switzerland so that they become personally familiar with us and with the true teachings of Islam. Then, when issues relating to Islam are debated in your country or in the Parliament, the politicians or other influential figures will be in a position to defend Islam from their platforms and to remove any suspicions or reservations that may exist.”

“For example, the construction of Minarets in Mosques was banned in your country and so you must educate Parliamentarians, influential figures and others about our religion so that they are well informed and able to counter those who oppose Islam and explain its true teachings.”

His Holiness also said it was imperative that Ahmadi Muslims not only listened to his Friday Sermon every week but sought to understand and learn from it.

“It is not just enough for Ahmadi Muslims to listen to my sermon each week but they should seek to understand and absorb it. People should try to listen to it more than once if possible and thereafter each person should honestly reflect if they are acting upon the instructions and guidance given in the sermons. Merely listening is not enough, rather it is necessary to act upon what is said by the Khalifa of the time.”

As the meeting drew to a close, His Holiness was asked if, and to what extent, members of the Ahmadiyya Muslim Community would be affected if a Third World War was to break out in the future.

“It is a natural phenomenon that if, God forbid, another world war takes places that members of our Community will also have to bear the consequences to some extent at least. If we look back to the wars fought during the early period of Islam, Allah the Almighty had promised and reassured the Muslims that they would be victorious, but still, were not some companions of the Holy Prophet of Islam (peace and blessings be upon him) martyred? Thus, the laws of nature cannot be circumvented. In this era, natural disasters or pandemics are coming as a warning from God Almighty for mankind and as a sign of the truth of the Promised Messiah (peace be upon him) but nonetheless some Ahmadi Muslims are also suffering from these catastrophes. However, if we maintain a relationship of sincerity and true fidelity with Allah the Almighty then the numbers of our members afflicted will be much smaller in comparison to others, God Willing. Through His Grace and Mercy, Allah the Almighty will protect us, so long as we are fulfilling our duties and obligations to Him.” 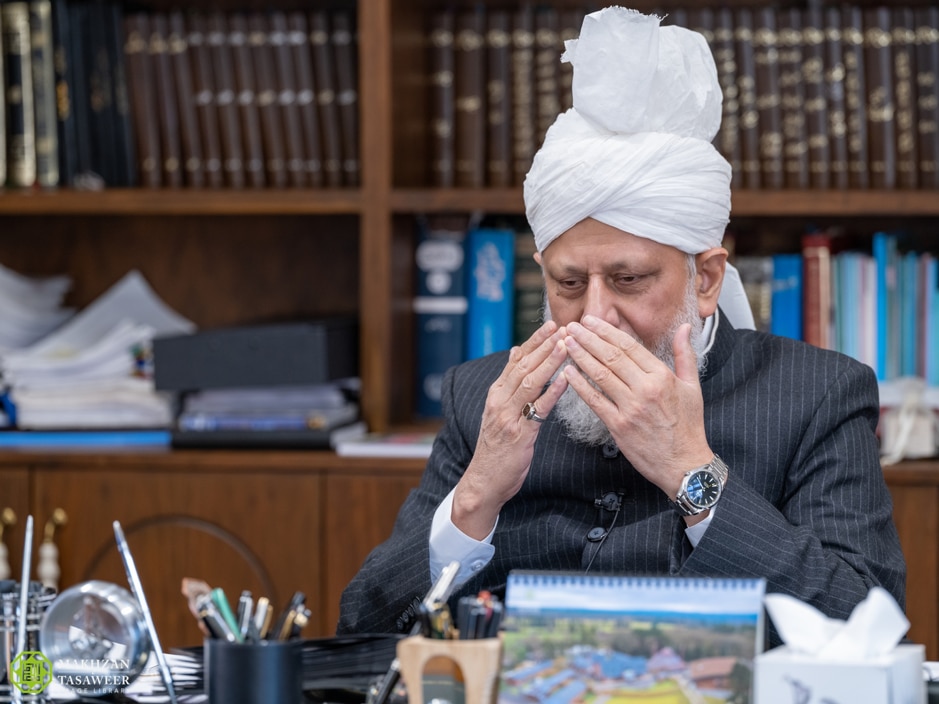 “Certainly, it is our duty, as Ahmadi Muslims, to warn other people that the real cause of  the myriad of trials and tribulations faced by humanity, such as warfare, is that mankind is moving rapidly away from God Almighty and is failing to fulfil the rights of His Creation. At least then, if in the future a world war occurs, others will remember that there was one Community who had warned mankind of what lay ahead and then they may finally be minded to turn in the direction of God Almighty.”

“As I said, if we are fulfilling our duties and responsibilities, any suffering our members face will be far less, God Willing, and ultimately we will come to see the great progress and success of the Ahmadiyya Muslim Community in the future. However, if our members fail to fulfil their duties and become the same as those who are worldly and engulfed by materialism, who neglect the five daily prayers, who fail to fulfil the rights of God Almighty and of one another, then their fate will also be the same as those worldly people who they imitate and follow. Remember, Allah the Almighty has not given any guarantee that just because we have verbally accepted the Promised Messiah (peace be upon him) that we will be saved, rather it is necessary to fulfil the conditions of our Bai’at (oath of allegiance) and to live our lives according to Islam’s teachings in every respect. This is why the Promised Messiah (peace be upon him) has said that those who truly fulfil the conditions of Bai’at and who love Him with all their heart and soul are they who will be saved by Allah the Almighty.”

X
Head of Ahmadiyya Muslim Community Responds to Comments of French President about Islam and Calls fo…Press ReleasesSpeaking earlier today, during his weekly Friday Sermon, delivered from the Mubarak Mosque in Islamabad, Tilford, the World Head of the Ahmadiyya Musl…