“Seek to bring about a true spiritual revolution in your nation and consider the cruel persecution you face as a means of sowing the seeds of progress for our Community.” – Hazrat Mirza Masroor Ahmad

His Holiness presided the meeting from his office in Islamabad, Tilford, whilst the life devotees joined from the Darut Tabligh Mosque complex in Dhaka, which serves as the National Headquarters of the Ahmadiyya Muslim Community in Bangladesh.

During the seventy minute meeting, all of the life devotees had the opportunity to personally speak to His Holiness and to seek his prayers and guidance.

A Missionary serving in Bangladesh sought the guidance of His Holiness regarding the fact that young Ahmadi Muslims living in villages or rural areas of Bangladesh tended to migrate to bigger cities in search of better economic or educational opportunities. He said this meant that the numbers of Ahmadi Muslim youth serving the Ahmadiyya Muslim Community in the rural areas or villages tended to be fewer.

“Migration from rural areas to urban areas and cities is something that occurs throughout the world and is entirely normal. This is not something that can be stopped or prevented. The fact that people move to the cities demonstrates that there are greater economic and educational opportunities there and it is also a sign that the nation is progressing. However, if initiatives such as the cottage industry scheme can be expanded in Bangladesh it will a very good thing and Ahmadi Muslims should also try to benefit from such opportunities.”

“Of course, some people, such as those who wish to pursue higher studies or seek professional training, have to migrate to the cities and so those Ahmadi Muslims who remain behind in the rural areas need to step up and serve our Community with even greater determination. They must strive to preach the message of the Ahmadiyya Muslim Community to others and, at the same time, must instil within the older members of Atfal (children) and the younger Khuddam (youth) the sense of responsibility that they must serve the Ahmadiyya Muslim Community as much as possible. Above all, whether our members stay in the rural areas or migrate to bigger cities, our objective should be that each and every Ahmadi Muslim proves to be a great asset for the Ahmadiyya Muslim Community and for the society in which they live and for their nation at large.”

His Holiness was also asked about a revelation vouchsafed to the Promised Messiah (peace be upon him) that the people of Bengal would be ‘consoled’.[i] 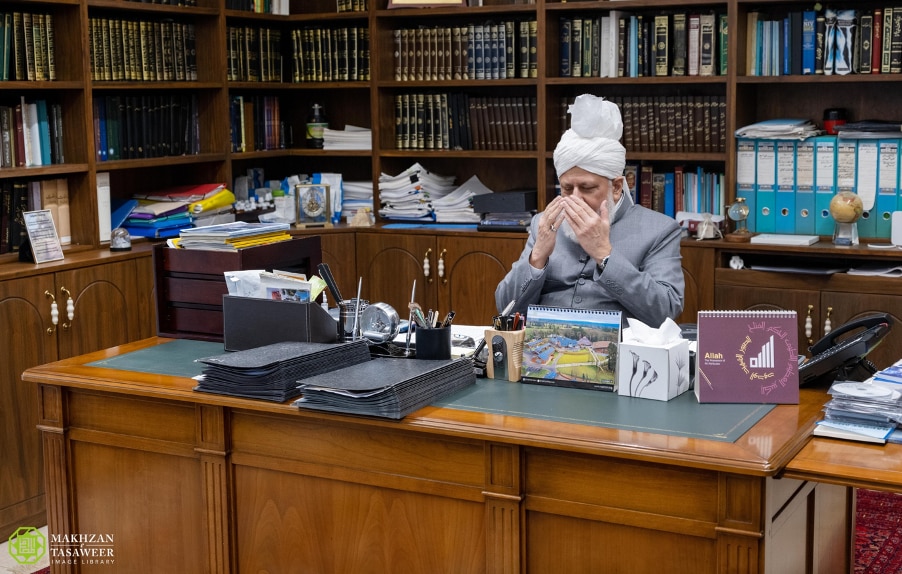 “To truly earn this status of being ‘consoled’ the Ahmadi Muslims in Bangladesh must strive and prove themselves worthy of it. I often say to Ahmadi Muslims from Bangladesh that already you have been the recipients of great love and affection but now you must fulfil your duties and responsibilities as well. You, the Ahmadi Muslims of Bangladesh must work hard and prove yourselves. You must increase your standards of righteousness. You must elevate your efforts to serve the Ahmadiyya Muslim Community with ever greater passion and zeal. Seek to bring about a true spiritual revolution in your nation and consider the cruel persecution you face as a means of sowing the seeds of progress for our Community. Indeed, history proves that as a result of persecution, more and more people are becoming aware of our Community and being introduced to our beliefs. We have seen this in Pakistan as well, that the more persecution we are subjected to, the more the message of the Promised Messiah (peace be upon him) is reaching far and wide in the rest of the world and within the country itself.”

“As I said, you should not fear the persecution you are facing but should consider that it is planting a seed for the great future success of the Ahmadiyya Muslim Community in Bangladesh. Your sacrifices will never ever be in vain and in return for them you will surely be consoled and be the recipients of great love. Unquestionably, there is no doubt that Ahmadi Muslims in Bangladesh have given sacrifices – our Mosques and members have been gravely attacked and some have been martyred and given their lives for the sake of their faith. Certainly, I always pray to Allah the Almighty that may He improve the situation in Bangladesh and keep you under His Protection and I always feel deep concern for all of you.”

As the meeting drew to a close, His Holiness was asked about his experiences as a prisoner of conscience in 1999, when he was falsely imprisoned for 11 days in Pakistan.

“During those days in prison, all I ever witnessed were the constant and immense blessings of Allah the Almighty. It was the summer time, yet Allah the Almighty caused for the weather to become cool and pleasant. My period in jail was spent in contentment and without any fear whatsoever. It was my firm belief that, given the gravity of the charges and accusations levelled against me, that I would either spend the rest of my life in prison or would face the death penalty. These were the two options that I saw ahead but I was not worried or fearful, rather I sought the Help of Allah the Almighty and desired to please Him. I considered that if I am to be punished for the sake of my faith it is a means of great blessings. However, Allah the Almighty had a different plan for me and so after ten or eleven days He created the conditions for my release from the jail.”

X
National Majlis-e-Amila in Switzerland have Honour of Virtual Meeting With World Head of Ahmadiyya M…Press Releases“Remember, Allah the Almighty has not given any guarantee that just because we have verbally accepted the Promised Messiah (peace be upon him) that we…