On 30 August 2020, the World Head of the Ahmadiyya Muslim Community, the Fifth Khalifa (Caliph), His Holiness, Hazrat Mirza Masroor Ahmad held a virtual online meeting with over 125 members of Majlis Khuddam-ul-Ahmadiyya Holland.

His Holiness presided the inspirational session from his office in Islamabad, Tilford, whilst the members of Majlis Khuddam-ul-Ahmadiyya were seated at the Het Witte Huis (White House), a conference centre located near the Baitul Aafiyat Mosque in Almere. 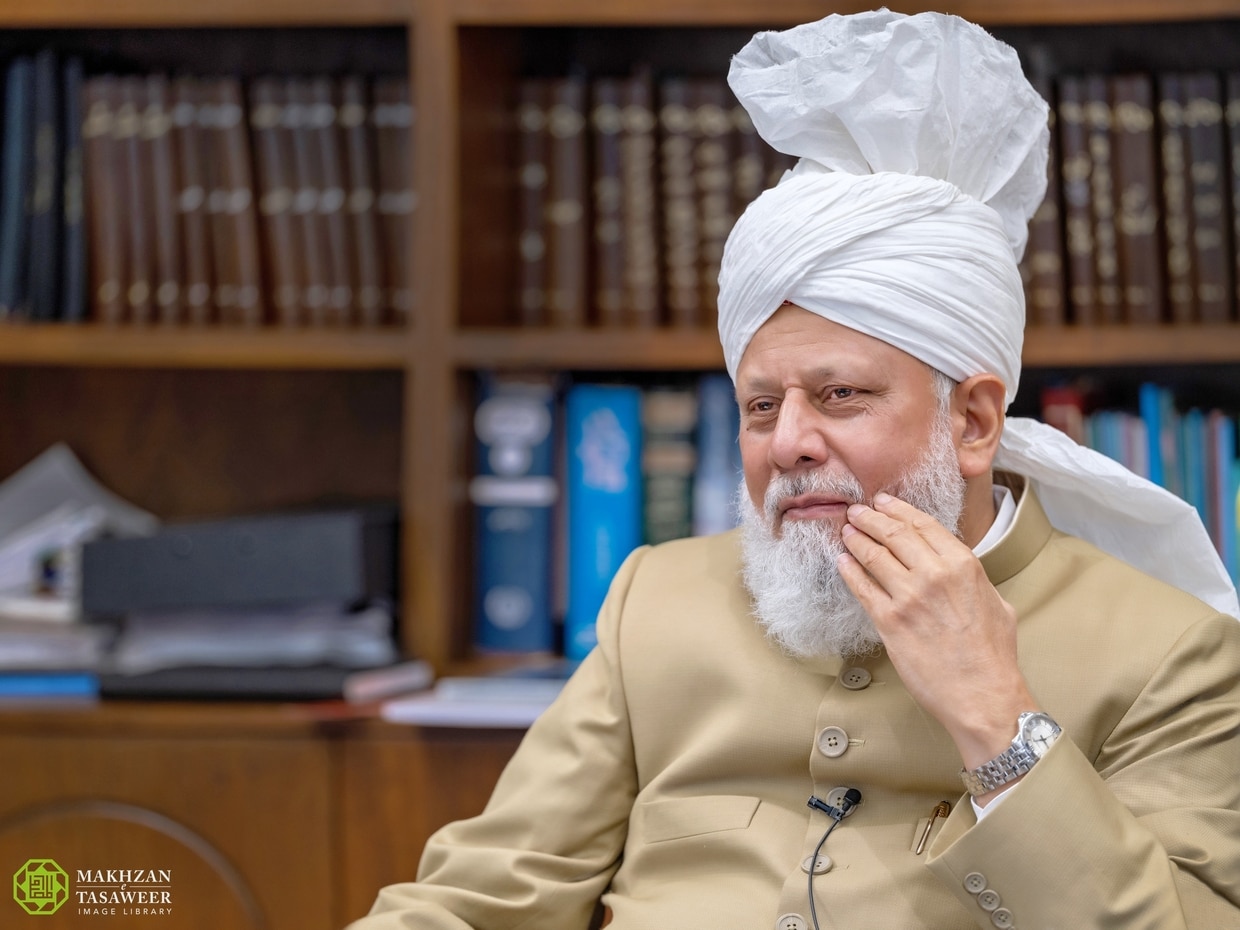 The event started with the recitation and translation of verses of the Holy Quran, followed by a poem. Thereafter, for the rest of the hour-long meeting, members of Majlis Khuddamul-ul-Ahmadiyya had the opportunity to ask His Holiness a series of questions regarding their faith, religion and contemporary issues.

During the meeting, His Holiness was asked various questions, including how parents could best inculcate a belief in God Almighty amongst infant children; political developments in the Middle East; whether there was a need to increase farming and agriculture in a post COVID-19 world and His Holiness was also asked to share a personal reflection from his youth.

Upon being asked about the appropriate way to offer religious and moral training to young children, Hazrat Mirza Masroor Ahmad said:

“Allah the Almighty has said that the moral training of a child should start from birth. Hence, the Holy Prophet of Islam (peace and blessings of Allah be upon him) taught that when a Muslim child is born the Adhan and Iqamah (calls to prayer) should be recited to the child so that Allah’s name enters his ear from birth. Thus, the moral training of a child starts on day one and so do not think that a young infant cannot understand anything.”

“As the child gets older, explain to him that whatever they have has been bestowed by Allah the Almighty and He has fulfilled all their needs and that they should express their gratitude to Him. When a child reaches the age of seven you should encourage them to do their prayers as much as possible, however at the same time, you should not put a young child under stress or cause them anxiety. Treat them with love and tenderness. The key point to remember is that the lessons a person learns in childhood are often those that last a lifetime.”

Regarding recent developments in the Middle East, following the recent official recognition of Israel by the UAE, Hazrat Mirza Masroor Ahmad said:

“The fundamental issue is the intentions of each party. If their intentions are good and sincere then anything that can facilitate peace is good. Regardless, these are political issues and, as Ahmadi Muslims, we should always focus upon prayer. We should pray for all those who are deprived of their rights.” 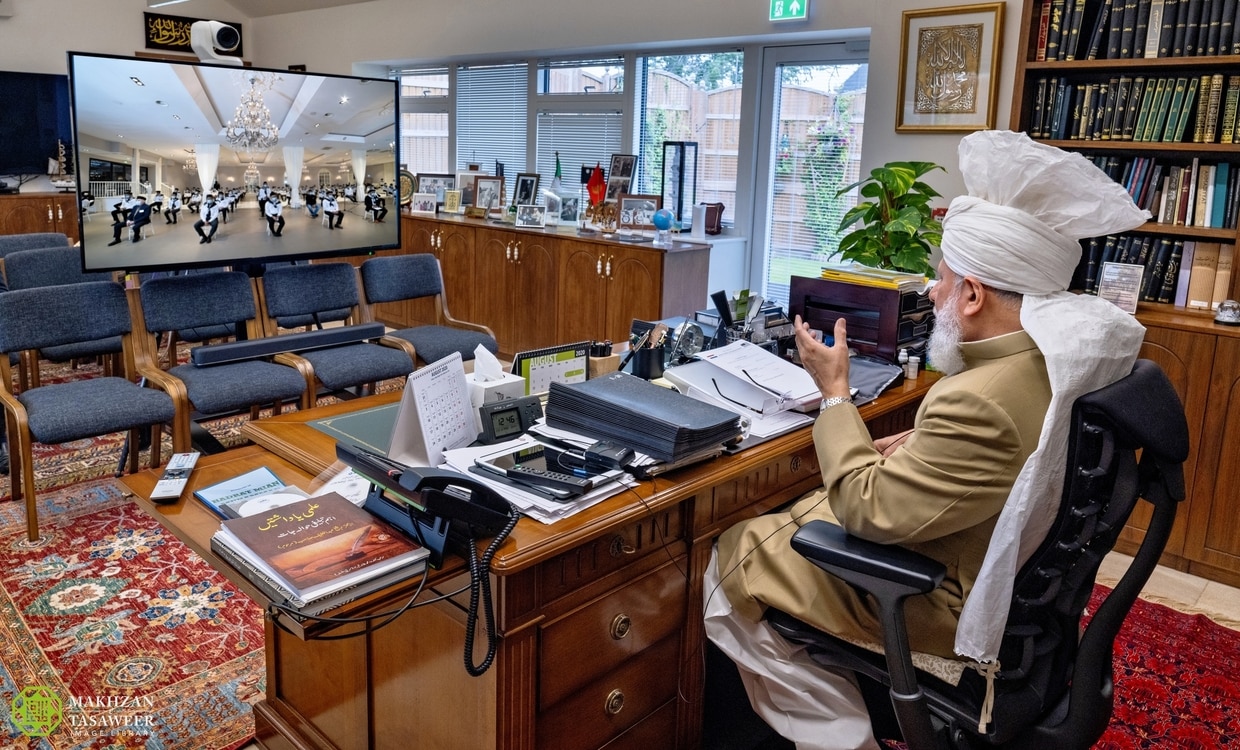 His Holiness was also asked whether the likely economic turmoil post-COVID-19 meant that individuals or nations should strive to increase their agricultural output as a means to ensure food security.

“Certainly, in the UK, now that they are no longer members of the European Union it would be prudent for the British Government to promote farming and agriculture. As for European Union members, if they remain united and continue to cooperate with one another when it comes to food security, it will certainly be in their interests. Nonetheless, we must pray that the inevitable economic turmoil does not lead to warfare. God forbid, if a nuclear weapon was ever used then no matter how much farming or agriculture was done it would be in vain. Thus, as we look to the future, it is essential that we seek the Mercy of Allah the Almighty.”

His Holiness also urged Ahmadi Muslims to maintain a balanced and nutritious diet. He advised that those who could afford it should try to eat organic food and also to eat leafy green vegetables such as spinach or kale.

As the class drew to a close, His Holiness was asked to share a special memory of his time as an Ahmadi Muslim youth.

“I remember with fondness that time, during my childhood, when there were no major restrictions upon Ahmadi Muslims in Pakistan. Each year, we would hold the Khuddam Ijtema (Annual Youth Gathering) and we used to camp on the premises of the Ijtema. However, we did not have proper tents and so we used to build our tent and camp using bedsheets! As children, we were excited to have the opportunity to camp and stay on the premises of the Ijtema. They were truly special moments which I liked very much.” 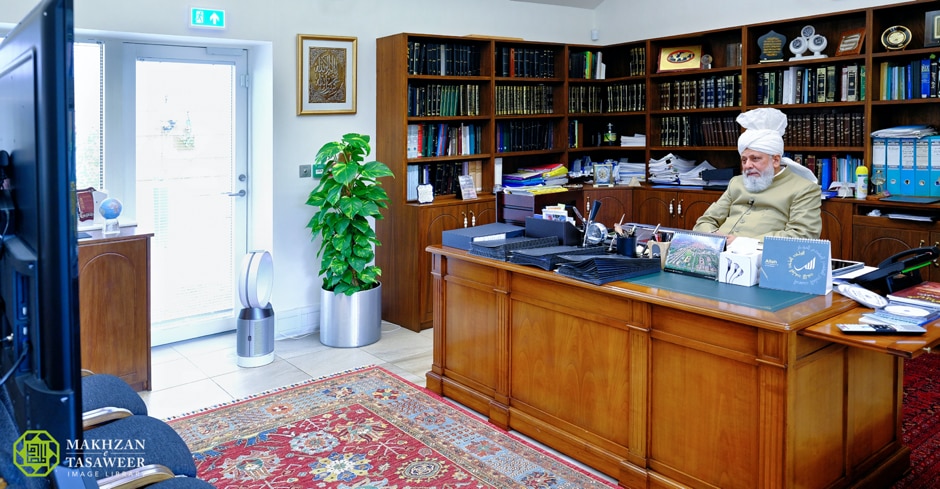 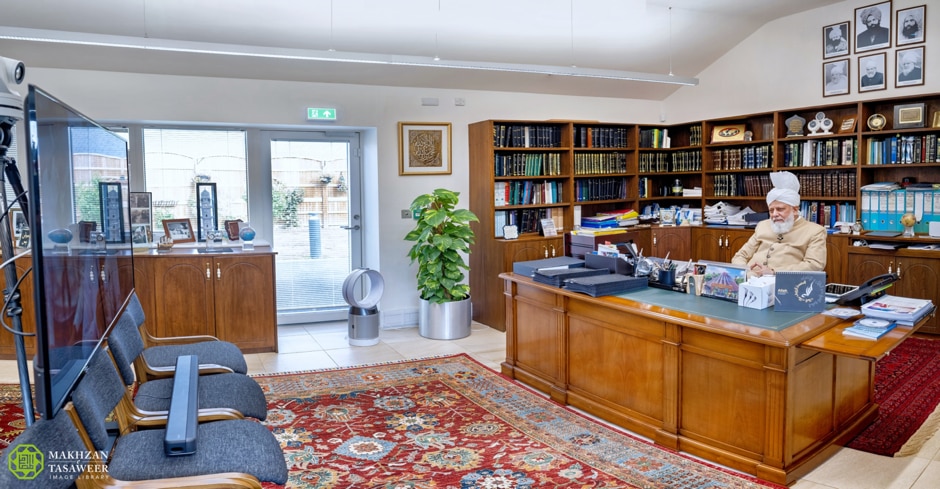