With these words, the Holy Prophetsa predicted the spread of Islam in the rest of the Arab world as well as in Europe, Africa and Asia and how we, the latter Muslims, would trail the pages of history in search of our great ancestors who preceded us in faith and look to emulate their examples .

In fact, our master Bilalra, the forerunner of the Abyssinians was not the only companion from Al-Habasha, but no doubt he was the most prominent one due to his immense sacrifices and services to Islam. However, there were so many great Abyssinian companions, one of them is a great lady whom the Holy Prophetsa considered one of his mothers!

She is the great lady of Abyssinia: Baraka bint Tha’albah. In pre-Islamic Arabia, slavery was a norm, and slaves were treated like animals. As a young girl Baraka was put up for sale in Mecca as a slave, but she was treated thereafter with kindness and love as she was blessed to be bought by a noble man: Abdullah, the father of the Holy Prophetsa.

When his wife, Aminah was pregnant, Baraka took care of her and witnessed the birth of the beloved of Allahsa. In fact, she was the only person who accompanied him almost throughout his life.

When the Holy Prophetsa reached the age of six, his mother Aminah visited the city of Medina. She took him with her to visit his father’s uncles as well as his father’s grave for the first time. They were accompanied by Baraka, to take care of the child.

After staying in Medina for about a month, his mother decided to return to Mecca, and when they arrived at a place called Al-Abwaa’, halfway to Mecca, she became ill and died. Baraka caressed the head of the orphan and told him to help her dig his mother’s grave. He helped her while crying. When they finished the burial, Baraka took him gently by the hand to leave, he walked with her while looking back towards the grave saying: “my mother, my mother”. Thus, the orphan returned to Mecca motherless where he lived under the care of his paternal grandfather, Abdul Muttalib, while Baraka continued to look after him. She cared for him, compensating for the love of both his father and mother alike. She looked after him till he grew up and married Hadhrat Khadijara.

Upon his marriage, he freed her and married her to Ubaid bin Zaid. Thereafter, she moved with her husband to Yathrib, but there he died after she gave birth to his son Ayman after which, according to Arab custom, she began being known as Umm Ayman.

The widowed Umm Ayman returned to Mecca and lived under the care of the Holy Prophetsa.

At that time, the Holy Prophetsa announced: “Whoso is happy to marry a woman of Paradise, let him marry Umm Ayman”, therefore it was said that Umm Ayman was amongst those promised Paradise.

It was the freed slave and the beloved of the Holy Prophetsa Zaid bin Haritha who stepped forward and married her. They had a son named Usamah who was described as “the beloved son of the beloved.” Usamah later had the honour of leading the last troops sent by the Holy Prophetsa, the army which consisted of the most prominent companions such as Abu Bakr and ‘Umar bin Al-Khattab (May Allah be pleased with them).

Umm Ayman was a brave woman; she was present at the Battle of Uhud. She fetched water for the soldiers and helped treat the injured. She also accompanied the Holy Prophetsa in the Battle of Khaybar.

In the battle of Uhud, many men ran away toward Medina after the rumour of the death of the Holy Prophetsa. Umm Ayman threw dust on their faces and told them: “Give me your swords” then she went toward the battlefield and subsequently was injured.

She was also among those who defended Hadhrat Ayshara in the incident of Ifk (slander). When the Messenger of Allah asked her about Ayshara, she said: ‘I have never heard or seen from her anything but good’.

The Holy Prophetsa used to say about Umm Ayman: ‘She is my mother after my own mother. She is the rest of my family’.

In her migration journey to Medina, Um Ayman was fasting. She arrived at the time of breaking the fast to a place called Al-Munsaraf, she had no provision of water and she was very thirsty. Suddenly a bucket of water hanged down from the sky, she drank till her thirst was gone. Um Ayman said, “Since then I never felt thirsty, even when I fast on the hottest day’.

As Umm Ayman was non-Arab, she had difficulty in pronouncing the letter ‘thaa’’, and she was also unable to say ‘Asslamu’alaikum’ she used to say ‘laa salaam’ or ‘Salaam laa alaikum’, so the Holy Prophetsa advised her to say ‘Salaam’ only as what she was able to say means no salaam.

Again as any mother, she always obliged him to eat, or asked him to serve her with something; once she looked at him while he was drinking water and said: ‘give me the water’, Ayshara said: ‘Do you say this to the messenger of Allah?’ She said: ‘Yes I served him for a longer period.’ The Holy Prophetsa said: ‘she is right indeed’ and then he served her water.

When her first husband Ubaid died, when her son Ayman was martyred in Hunain and when her second husband was martyred in Mu’tah, Umm Ayman displayed patience and did not cry for them, but when the Holy Prophetsa died, Abu Bakr and ‘Umar (May Allah be pleased with them) went to visit her. When she saw them, she wept. They said to her, “What makes you weep? Do you not know that what Allah has in store for His Messengersa is better than this worldly life?” She said, “I weep not because I am ignorant of the fact that what is in store for the Messenger of Allah in the Hereafter is better than this world, but I weep because the Revelation has ceased to come”. This moved them both to tears and they began to weep along with her.

Abu Bakr and ‘Umar (May Allah be pleased with them) continued to visit her regularly as the Holy Prophetsa used to do.

As she enjoyed the blessed company of the Holy Prophetsa, she narrated many Ahadith from him.

Umm Ayman (may Allah be pleased with her) passed away in the early part of the caliphate of Hadhrat Uthmanra. He led her funeral prayers and laid her to rest in the Baqi’ graveyard. 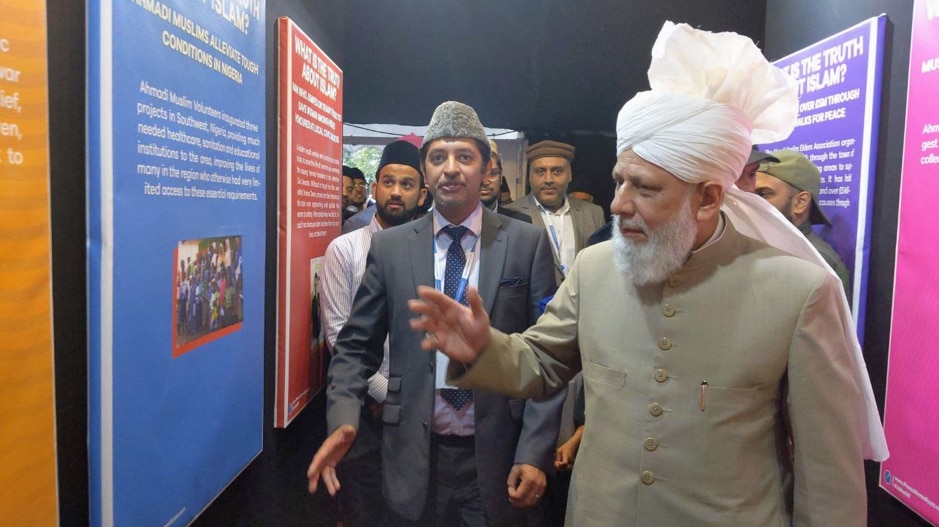 Memories of My Father