The World Head of the Ahmadiyya Muslim Community, the Fifth Khalifa (Caliph), His Holiness, Hazrat Mirza Masroor Ahmad, delivered the Eid-ul-Adha sermon on 10 July 2022 from the Mubarak Mosque in Islamabad, Tilford.

Across the world, millions of Ahmadi Muslims were able to listen live to the Eid Sermon of their Caliph and to join in with the silent prayer led by their spiritual leader through the global television channel MTA International.

During the sermon, His Holiness spoke of the outstanding sacrifices made by Prophet Abraham, his wife Hazrat Hajra and their son Prophet Ismail (peace be upon them) in memory of which Eid-ul-Adha is celebrated.

“Today, by the Grace of Allah we are celebrating Eid-ul-Adha which is the Eid of sacrifice. It is celebrated in memory of the sacrifice made by a father, mother and son thousands of years ago. It was not a momentary sacrifice, rather it spanned several years. Prophet Abraham (peace be upon him) left his beloved wife and son in a barren land. He did so, only because this was the commandment of Allah the Almighty given to him. When his wife found out that she and her son were being left there for the sake of Allah the Almighty, she showed a tremendous spirit of sacrifice. She said to Prophet Abraham (peace be upon him), with great resolve and firmness that, ‘Then you must leave us. If this is being done as a result of the commandment of Allah the Almighty, then Allah will never forsake us.’ So [as a result of their sacrifice,] Allah the Almighty arranged for a constant stream of water in that very place [where they were left behind] and the stream continues to give water today. Allah the Almighty also arranged for food. In fact, He established a town in the desert and according to His promise, Allah the Almighty provided for all necessities and all the fruits and blessings are available in it…There was a time when it was a barren desert and now that place has become the source of income for hundreds of thousands of people and millions of people eat from there. So, this is how Allah the Almighty fulfils His promise and shows a shining sign.” 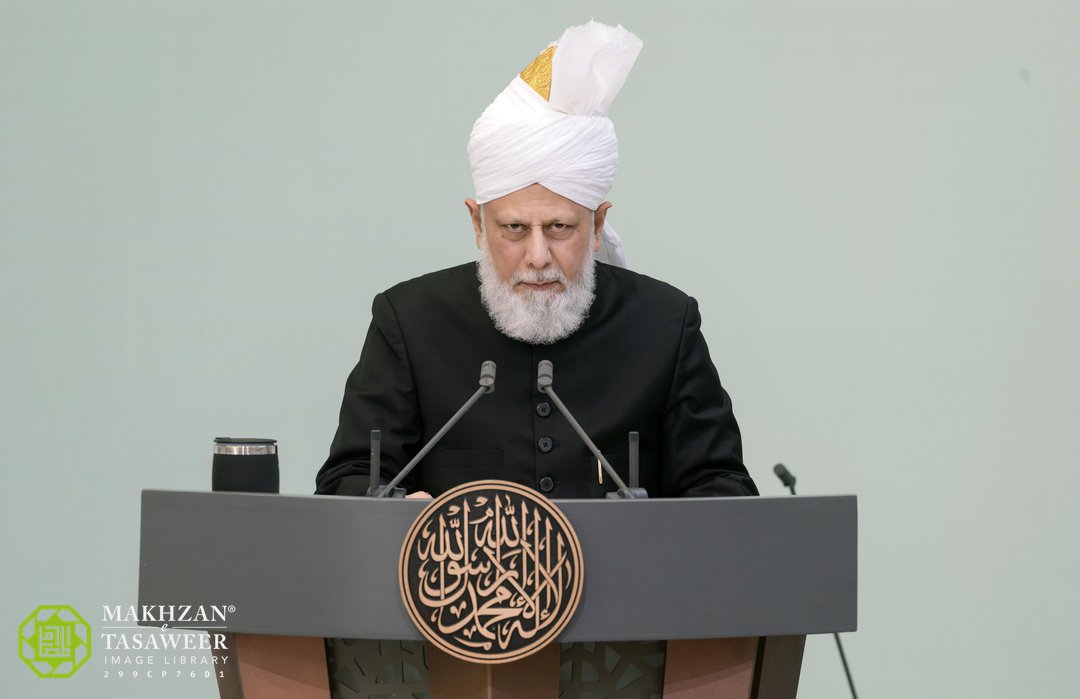 His Holiness said the spiritual blessings bestowed to Prophet Abraham (peace be upon him) and his family also continued, whereby the Holy Prophet Muhammad (peace and blessings be upon him) was born amongst their progeny and he is the prophet that has now become the recipient of the daily Durood salutations invoked upon him by millions of Muslims.

Speaking of the blessings endowed to the religion that was brought by the Holy Prophet Muhammad (peace and blessings be upon him), Hazrat Mirza Masroor Ahmad said:

“There is no religion [other than Islam] in the world today whose followers are acting upon the true teachings of the founder and prophet of their religion. There is no book that is found today and there are no commandments available today in their original form as revealed to any prophet [other than the Holy Quran]. It is only the Holy Quran regarding which Allah the Almighty promised the Holy Prophet Muhammad (peace and blessings be upon him) that, ‘I shall safeguard it and maintain it in its original form.’ Today it has been over 1400 years and despite the efforts of the opponents of Islam, this remains the only scripture that is unchanged.”

His Holiness went onto explain how the protection of Islamic teachings was further guaranteed by Allah the Almighty when Allah the Almighty promised the Holy Prophet Muhammad (peace and blessings be upon him) that He shall send the Promised Messiah (peace be upon him) in the latter days to prove the superiority of Islam over all other beliefs.

“[The Promised Messiah (peace be upon him)] is the champion of Allah the Almighty who not only showed the wonders of Islam to people by presenting its beautiful teachings, rather he challenged every opponent that they shall fail to show any other teaching which can present teachings as beautiful as Islam…At the same time the Promised Messiah (peace be upon him) also advised the Muslims that the present era is not a time of fighting physical wars and battles. Rather, it is time to prove the superiority of Islam over other faiths through peaceful means of manifest proofs and evidences.”

Unfortunately, Muslims have generally failed to heed that message, His Holiness said, and instead they have resorted to persecuting Ahmadi Muslims.

“Ahmadi Muslim children are being harassed in schools and streets and there is an effort to make them develop fear and anxiety. The persecution is so severe that even the graves of Ahmadi Muslims are being exhumed and disrespected. What kind of Islam do these people wish to spread in the world? Islam is a religion of peace and security. Islam is a religion of love and kindness. The Eid that is being celebrated today is in memory of the people who became ready to sacrifice their freedom, honour and lives for the sake of God Almighty. When they prayed for a city to be established, they prayed in the words, ‘My Lord, make this a town of peace.’ They prayed for it to become a ‘town of peace’ so that whoever lives there and visits there can be the guarantor of keeping and spreading peace. Thus, does this prayer not demand of the Muslims that if they associate themselves to that town and if they worship the Lord of the Kaaba and if they wish to fulfil the objectives of the sacrifices of Prophet Abraham and Ismail (peace be upon them) then they should make their hearts into abodes of peace, tranquillity, kindness and love? Rather than being at each other’s throats, they should set examples of [the Quranic verse that believers are] ‘tender among themselves’ and so they should deliver the message of peace to the world.”

Speaking of the way the situation is developing for Ahmadi Muslims in Pakistan, Hazrat Mirza Masroor Ahmad said:

“When these circumstances [of injustice] reach their peak, then the punishment of Allah the Almighty comes into action and destroys the perpetrators of injustice, regardless of whether they are so-called grand scholars or great leaders or high-ranking officials. We as Ahmadi Muslims are those who always make sacrifices for the sake of God. This is the lesson that we have learnt from these Eids and from our history. We have made pledges to sacrifice all that we have, including our lives, wealth, time and honour. However, there are some who are weaker and I wish to say to those Ahmadi Muslims that that they should hold fast to patience and prayer. These prayers will certainly bear fruit one day, God willing. The sacrifices of Prophet Abraham, Hazrat Hajra and Prophet Ismail (peace be upon them) bore fruit too. However, they did not ever let go of patience and prayer. The grand Prophet (peace and blessings be upon him) that came in the progeny of Prophet Abraham (peace be upon him), his sacrifices and the sacrifices of his companions also bore fruit at their appointed time and Allah the Almighty fulfilled His promises. Thus, that same God who fulfilled His promises earlier, can he now abandon us? Certainly not! Even today He will come to the help of those who believe in him and are facing injustice.” 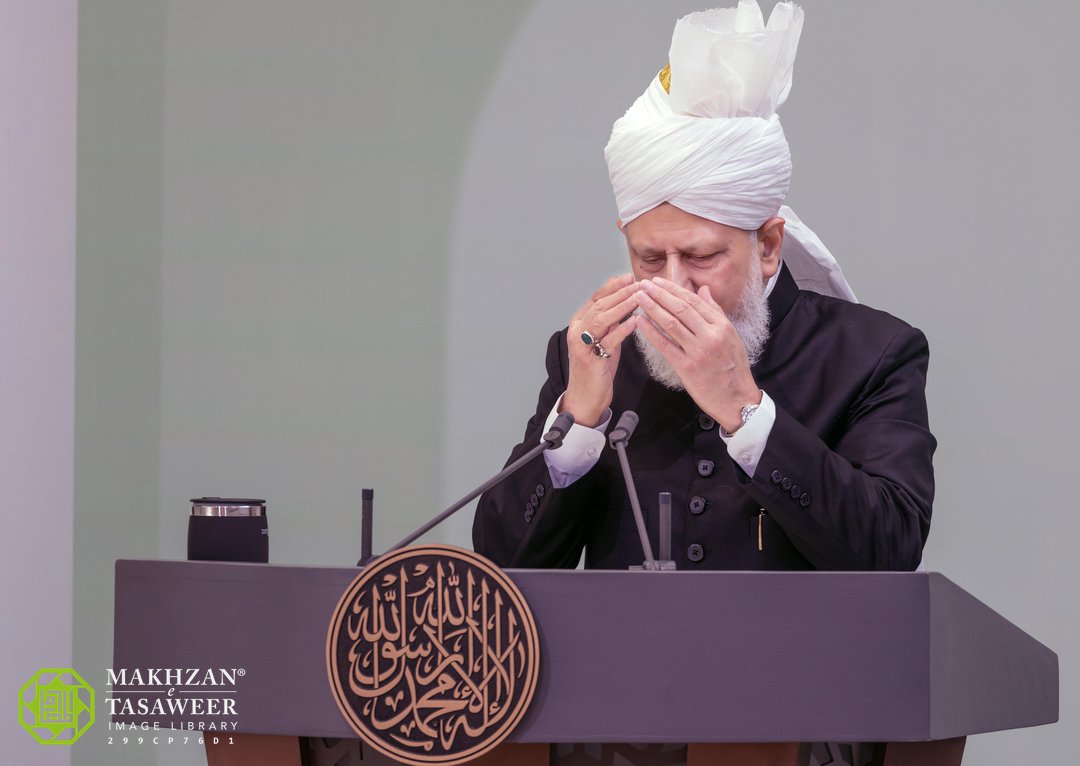 “Today the opponents are meting out every form of cruelty against us in confidence of the so-called power they hold. However, our opponents’ power holds no value in front of God Almighty. Therefore, it is our responsibility to turn to Allah the Almighty more than before, reach the high standards of worship and fulfil the rights of His creation. We should be ready to present our sacrifices solely for the sake of Allah the Almighty. We must increase in our righteousness and truly attain the spirit of this Eid which is to make sacrifices. Only then can we face our opponents, only then can we absorb the bounties of God Almighty and see the fulfilment of the promises that Allah the Almighty made to the Promised Messiah (peace be upon him)… As a Community, the more we self-analyse and the more we try to better our spiritual condition, the sooner will we see manifest signs of the help, support and succour of Allah the Almighty.”

Near the end of his sermon, His Holiness also spoke of another subject that is intrinsically linked with the concept of sacrifice that Eid-ul-Adha signifies. His Holiness spoke of the Waqf-e-Nau scheme within the Ahmadiyya Muslim Community in which parents dedicate the lives of their children before their birth for the service of faith. The children grow older to make their decision on whether they wish to continue the pledge made by their parents.

“The parents who have dedicated the lives of their children or those who are planning to do so, they should remember that it requires sacrifice. What is the standard of this sacrifice? It is the standard that was set by Prophet Abraham and Prophet Ismail (peace be upon them both). When Prophet Abraham said to his son that he has seen that he is sacrificing his son in his dream, he asked his son what his intentions were. The son who had been brought up by the father and mother who had reached excellence in piety, replied immediately that, ‘O my father, do as thou art commanded; thou wilt find me, if Allah please, steadfast in my faith.’  Therefore, at the time of dedicating their child’s life, the parents should do so with the intention that they are dedicating their life. At the same time, they must also ensure that they carry out the upbringing of their children in accordance to this pledge and they must pray for them too so that their children also give the same reply as the response given by Prophet Ismail (peace be upon him).”

Speaking to those Waqf-e-Nau who had already renewed their pledge to dedicate their own lives and were serving the cause of Islam, Hazrat Mirza Masroor Ahmad said:

“The Waqf-e-Nau who have already come to serve in the various departments of the Ahmadiyya Muslim Community, they must develop the Ismaili attributes within themselves. Only then will Allah the Almighty continue to open the paths of goodness and success for them.” 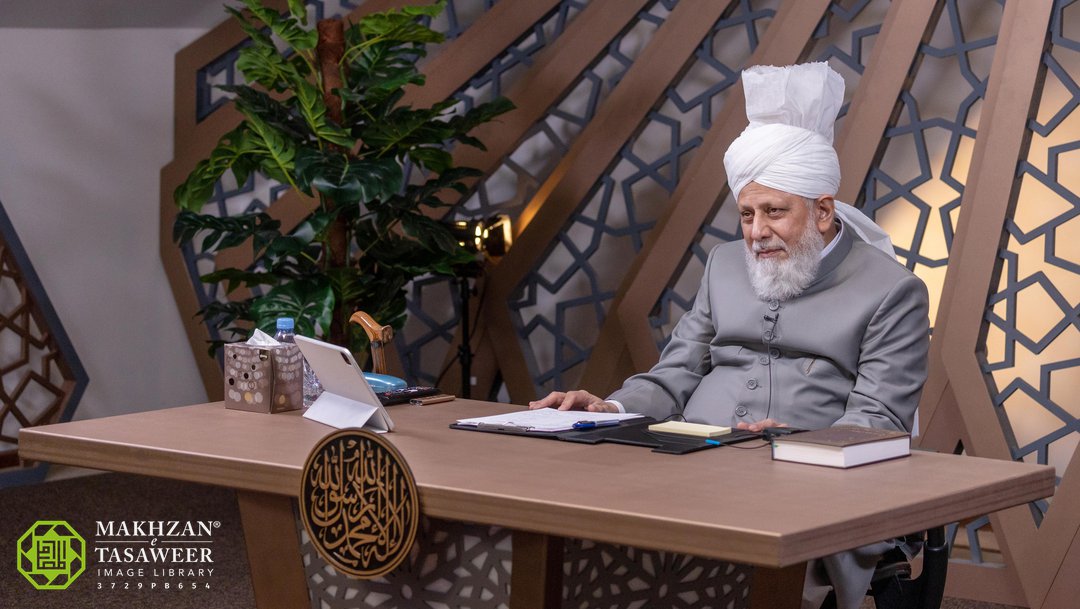