On 29 May 2022, the World Head of the Ahmadiyya Muslim Community, the Fifth Khalifa (Caliph), His Holiness, Hazrat Mirza Masroor Ahmad held a virtual online meeting with male members of the Waqf-e-Nau Scheme aged 15 and above from the United States.

His Holiness presided the meeting from MTA Studios in Islamabad, Tilford, whilst the Waqf-e-Nau gathered at the Baitur Rahman Mosque in Maryland, USA. 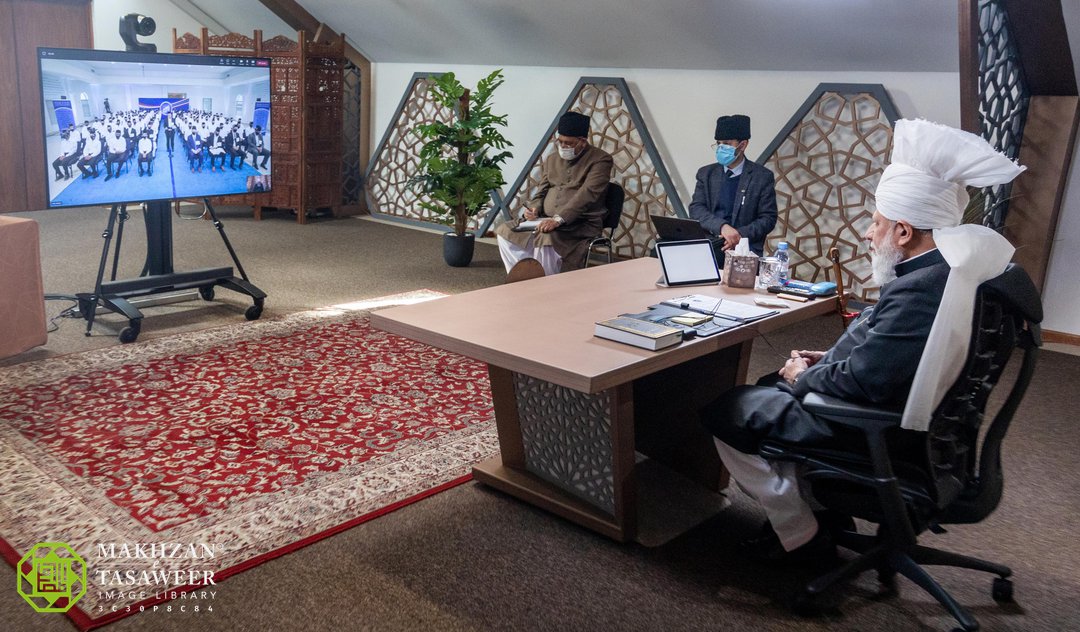 One of the Waqf-e-Nau mentioned that mass shootings are becoming increasingly common in America and referred to the shooting in a school in Uvalde, Texas in the last week. He asked for advice on what Americans can do to avoid such tragedies in the future.

“Show sense, don’t be senseless. That is the foremost duty of the people of United States and the government as well. Where there is frustration, these atrocities happen. If you forget your duties, your obligations and the purpose of your life, then these atrocities occur. Hence, it is the responsibility of Ahmadi Muslims, as true Muslims, that [they] let the people understand what are their duties and obligations, what is the purpose of their life. So, discharge your duties that you owe to your Creator. You know that the purpose of your life is not just to attain the worldly targets, but to worship Allah the Almighty, bow before Him, and always keep your eye on your life hereafter. And then you should know that the second important task given to us as a religious person, as a human being, is to discharge our duties we owe to each other. So instead of trying to snatch and grab your rights, you should try to give rights to others. If every person realises this and gives due rights to the other person, then this frustration will automatically vanish.”

Whilst advising that gun laws in the United States ought to be stricter, Hazrat Mirza Masroor Ahmad said:

“The United States should also enact some laws to stop these mass shootings. If there is no restriction, if everyone is free to go to the arms shop and buy whatever he likes or she likes then what is happening is the ultimate result of it. So in my view, the [United States] government should also now take steps and they should impose some restrictions. At the very least, they should impose an age limit on those permitted to buy arms – especially automatic or semi-automatic [guns].”

Speaking of another crucial element in the fight against gun violence, Hazrat Mirza Masroor Ahmad said:

“At the same time, the programmes which are being shown on television, internet or media channels, they are also showing extremism, fights and violence which also encourages a sense of fun among the youngsters [in relation to guns]. That should also be checked and stopped. As far as we  are concerned, we cannot do anything. Rather, it is the duty of the government to put some legal restrictions. Legislators should enact some law in this regard. Our duty is that we should pray for the people of the world, for the people of our country that Allah the Almighty gives them sense, and also preach to the people and let them understand what their responsibilities are.” 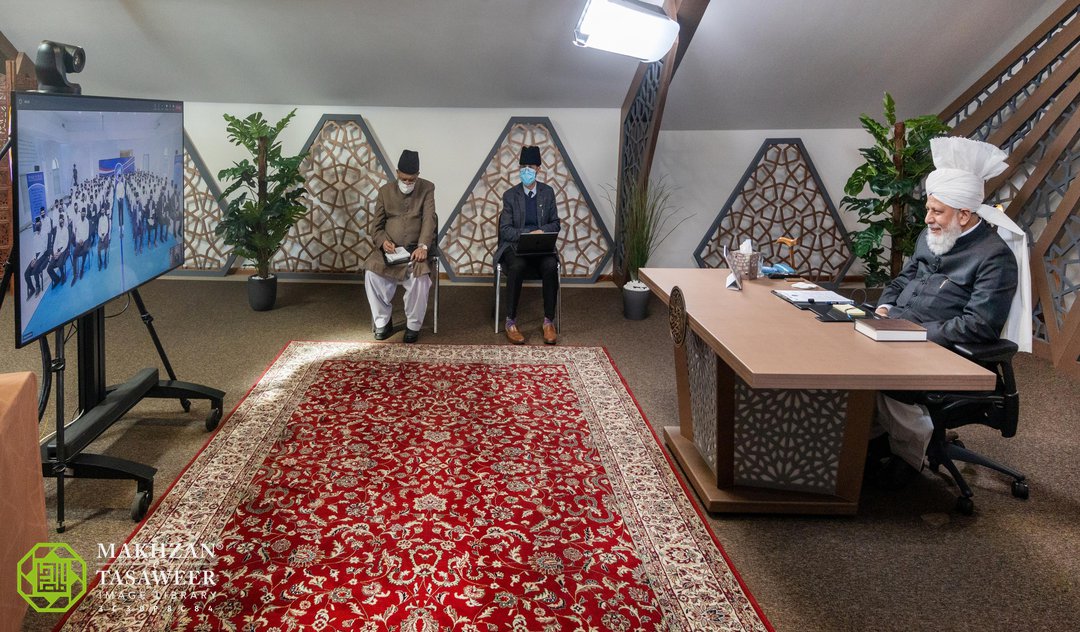 “You can only pray for these people. Pray for Muslim Ummah, that they take sense and try to accept the Reformer of the Age, the person who was sent by Allah the Almighty to revive the teachings of Islam and guide them on the right path… Otherwise, in those countries where there is opposition, you cannot do anything – until and unless you have some power – and at present we don’t have that power. This is why there is a Hadith which says that if you have power, then you should stop brutality and cruelty with your hand. If you don’t have that much power, then at least stop them by speaking up to the people and ask them to take sense. And if that is not possible, then pray for them. This is what the Hadith of the Holy Prophet (peace and blessings be upon him) states. So, we can only pray for them. That is the only solution. If you are praying fervently for them, then God-willing, one day you will see the result. I hope, God-willing, we shall change the world.”

A question also related to how one can stay firm upon their faith and not fall weak whilst traversing through different phases of life.

“It is a saying in Urdu, that the person who is sleeping, you can wake him, but the person who is already awake, and pretending as if he is sleeping, you cannot wake him. So, you know your shortcomings. You know that sometimes you are deviating from the right path – then at that time you should say Istighfar [prayer for seeking repentance from Allah the Almighty]. Recite the prayer ‘I seek refuge with Allah from Satan the accursed’. Pray to Allah the Almighty, that He always keeps you on the right path. So, if you are praying your five daily prayers, as prescribed and explained by the Holy Prophet (peace and blessings be upon him), then you pray in your prayers that Allah the Almighty always keeps you on the right path. This is the only solution.”

“There are some occasions when you are distracted because of the worldly things, but this is what Allah the Almighty says in the Quran – that as soon as you realise that you are going on the wrong path, stop and reform. Also always pray to Allah the Almighty that He saves you from further involving yourself in that sin or in that bad thing. Istighfar is the best solution and best way to keep yourself safe from these bad things and five daily prayers as prescribed by Allah the Almighty as has been explained and practiced by the Holy Prophet (peace and blessings be upon him), and has been explained in this age by the Promised Messiah (peace be upon him).”

A young man mentioned that he was serving as a Qaid, (youth leader in Majlis Khuddamul Ahmadiyya) and asked for advice on how to encourage and motivate young people to join the blessed scheme of Al-Wasiyyat.

“What does ‘Qaid’ mean? ‘Qaid’ is the Leader. So, you are the leader. If your words and your deeds, your actions are the same, then the people will follow you. They will try to listen to you. So, if they see that you are their sympathiser, they will come close to you. Whatever you are saying, they will hear it and they will try to follow it. So, the first thing is that reform yourself. Be like a person who is following the true teachings of Islam and the Quran. Secondly, make your fellow friends, fellow Khuddam realise, that whatever you are saying, you practice it. And then, let them realise that you are their true sympathiser. So, let them realise that you want them to always remain on the right path.”

“So, when these things are being portrayed by you, then other Khuddam will follow you. They will listen to you. And you can also explain to them this Wasiyyat scheme is very blessed scheme. If we join this scheme, Allah the Almighty will also help us and give us the opportunity to reform ourselves… If a person joins the scheme of Wasiyyat and he is a true follower, he has read the book of Al-Wasiyyat, then he will realise what their duties are and how should they behave.”

Highlighting the important role of Waqf-e-Nau members in bringing about a revolutionary change in the world, Hazrat Mirza Masroor Ahmad said:

“Being a Waqf-e-Nau, it is your utmost duty to be the example for others. You are the people who have promised to reform the world. You are the people whose parents promised, and then later on you also promised, that you will change the world and bring the whole of the mankind under the spiritual fold of Islam and Ahmadiyyat and make them realise their duties they owe to Allah the Almighty and towards fellow human beings. So if you are doing all these things, then there will be power in your words and even without saying something, your actions will attract other people to follow you.”

Another questioner asked His Holiness about how he came to choose the field of agriculture for his further studies.

“From childhood I had a keen interest in agriculture. So, I wanted to go into the field of agriculture but unfortunately I could not. But later on, after graduating with economics – and my father also asked me that, ‘If possible, you can go to agriculture university.’… So, I got admission in agricultural economics, or in the field of corporation and credit. So, there you have to deal with farmers. There are some courses with regards to practical agriculture, that is, agronomy and arable farming, and if you are an outsider – you joined the university after graduation – then you have to complete some deficiency courses. Since I knew agriculture and I had a keen interest from the very beginning – I used to go with my father to our family farm – so I did those deficiency courses with good results, and I later on completed my degree…So that was the main thing which caused me to go to the agriculture university and study agriculture.”

The Waqf-e-Nau member also asked His Holiness about what motivated him to become a Waqf-e-Zindagi, a life devotee of the Ahmadiyya Muslim Community for the service of Islam.

“From the very childhood, I wanted to be a life-devotee because once, I heard my father and one of my uncles talking that unfortunately, very few family members of the Promised Messiah (peace be upon him) are becoming Waqf-e-Zindagi. So that was engrained in my heart but I didn’t want that I do Waqf without any qualification. So, when I joined agriculture university, then at that time I promised that if I get good grades, A grade, then I will do Waqf. I prayed to Allah the Almighty, that, ‘If you think that I am capable of doing Waqf then please give me good grades. You know – as far as my own self is concerned – I am nothing.’ So, I don’t know how, but fortunately I had an A grade and when I had that grade, I was obliged to apply for Waqf-e-Zindagi. I wrote a letter to Hazrat Khalifatul Masih the Third, that now, since I have completed my MSc degree and with good grades, I want to do Waqf and he accepted. And later on, he asked me to go to Africa.” 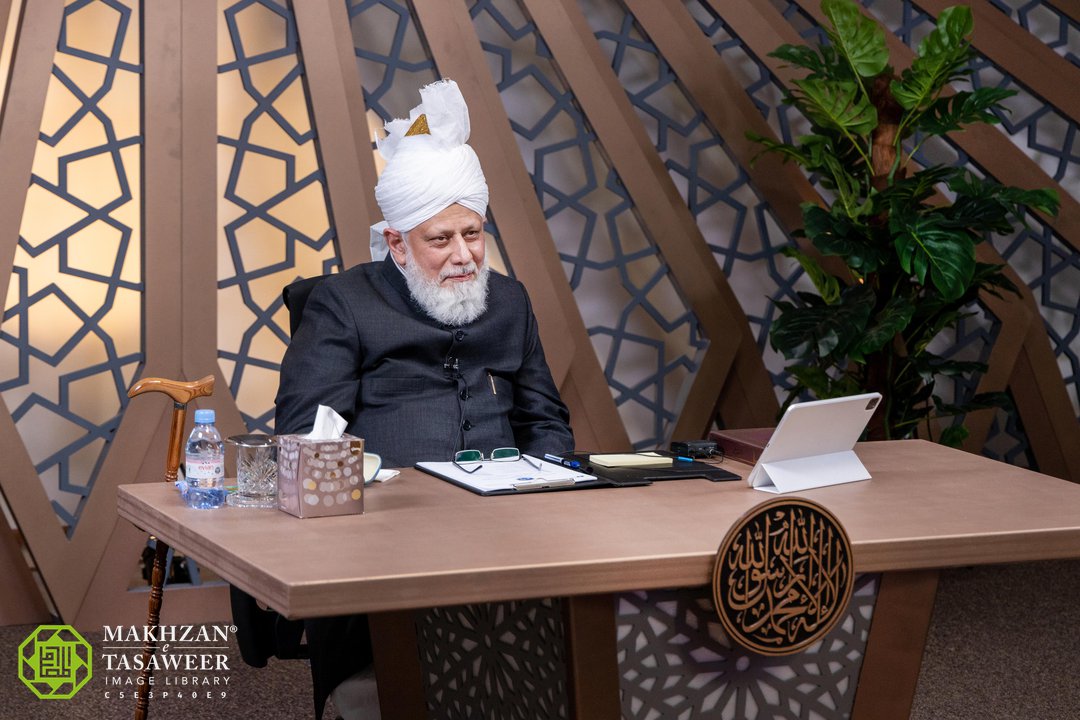 Waqf-e-Nau Lajna from the U.S.A. Have Honour of a Virtual Meeting with Head of the Ahmadiyya Muslim Community