On 31 October 2021, the World Head of the Ahmadiyya Muslim Community, the Fifth Khalifa (Caliph), His Holiness, Hazrat Mirza Masroor Ahmad delivered a faith inspiring address to conclude the International Conference of the charity Humanity First.

The 2-day event, which was held at the Baitul Futuh Mosque in London on Saturday, and then in Islamabad, Tilford on Sunday was themed as ‘Poverty alleviation through empowerment’. 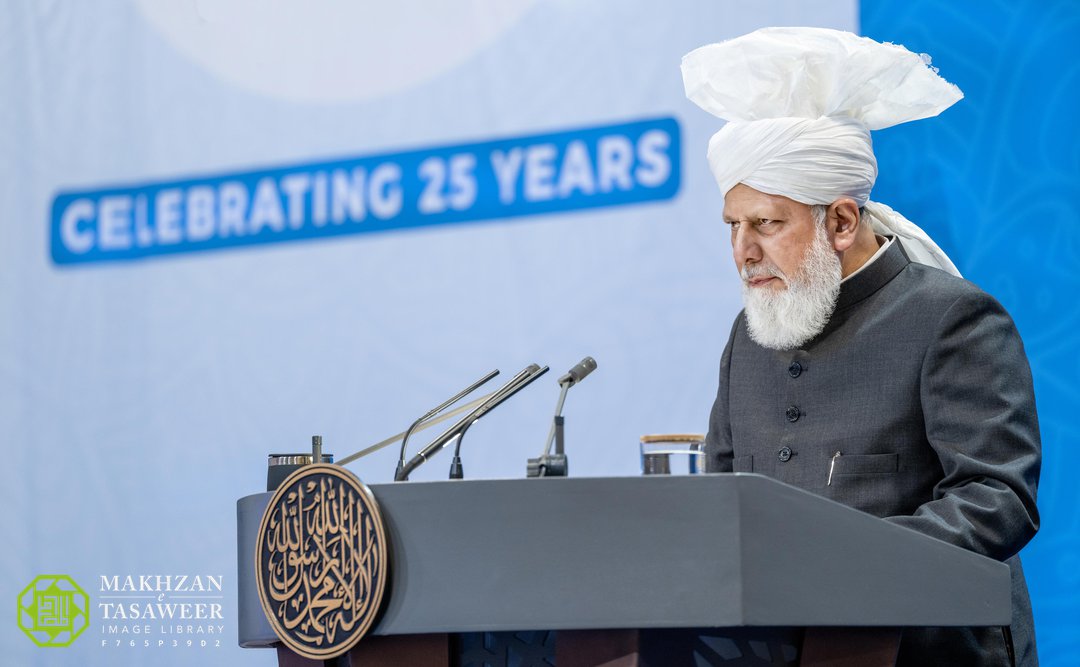 The Humanity First Silver Jubilee conference, delayed a year due to COVID-19, was attended either physically or virtually by more than 1200 people, comprising Humanity First delegates and members from over 60 countries around the world.

During the keynote address, Hazrat Mirza Masroor Ahmad spoke of the objectives of Humanity First, outlining its mission to serve those in need.

Hazrat Mirza Masroor Ahmad first mentioned that Humanity First International was unable to hold its conference last year, and that this year marked 26 years since its inception.

“It has now been 26 years since Humanity First was first formally registered and, with the Grace of Allah, ever since its inception, Humanity First has continued to grow and develop and has conducted a lot of impactful work in many parts of the world. It has served in some capacity or other in over sixty countries, including in the Americas, Europe, throughout Africa, the Middle East, Asia and the Pacific.”

His Holiness mentioned some of the humanitarian initiatives carried out by Humanity First across the planet including providing water, education and sustainable skills projects in underdeveloped countries.

His Holiness also mentioned that Humanity First had progressed and developed so much over the past few years that it had now started to be a globally recognised institution.

“By the Grace of Allah, Humanity First is now a very well established and well-respected international charitable organisation. Indeed, Humanity First has now reached the stage where external NGOs or similar humanitarian organisations are seeking to partner and collaborate with it to fulfil their own charitable obligations and objectives.”

“In one country, an international NGO, linked to the United Nations, expressed its desire and intention to give funds to Humanity First in order for it to carry out humanitarian work and projects on its behalf. This demonstrates that, with the Grace of Allah, Humanity First has earned the respect and trust of other humanitarian agencies, including those associated with the United Nations.” 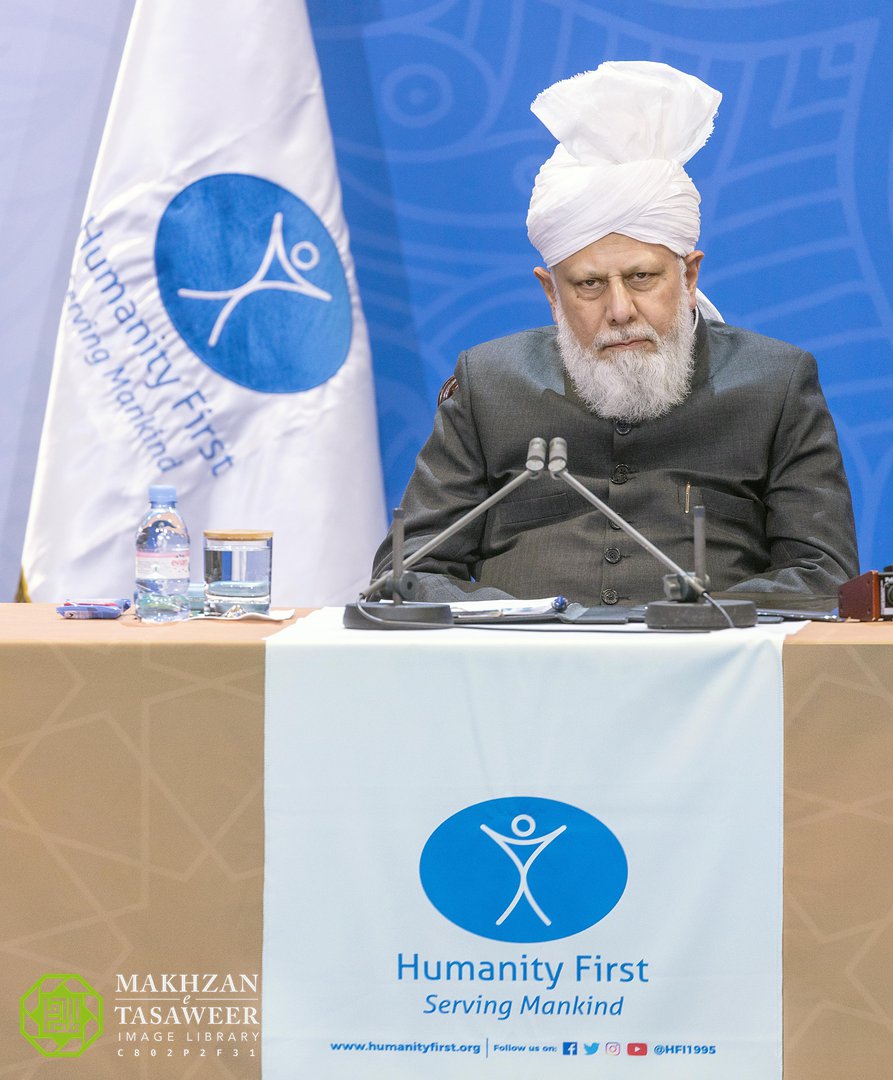 “It reflects the fact that Humanity First has earnestly strived to fulfil that noble objective which Allah the Almighty has commanded us to pursue in the Holy Quran – and which ought to be the life-long objective of a Muslim – to serve humanity and to fulfil the needs of those who are facing any adversity.” 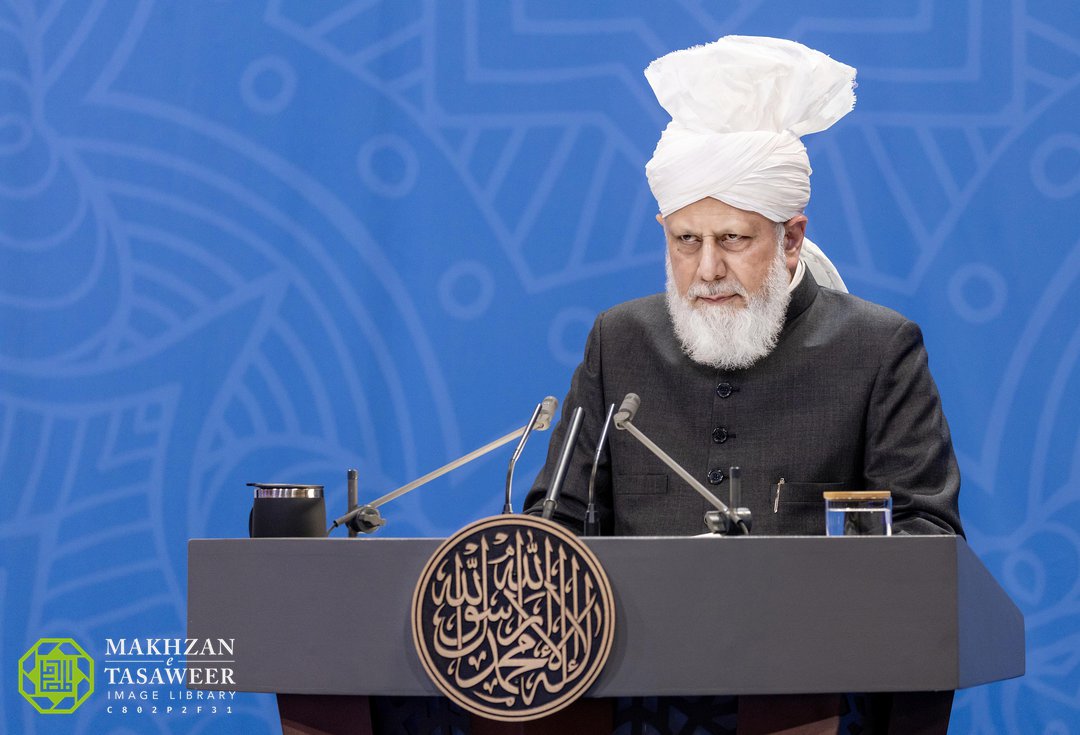 His Holiness explained that this objective is one vouchsafed to Muslims through the example of the Holy Prophet Muhammad (peace and blessings of Allah be upon him). 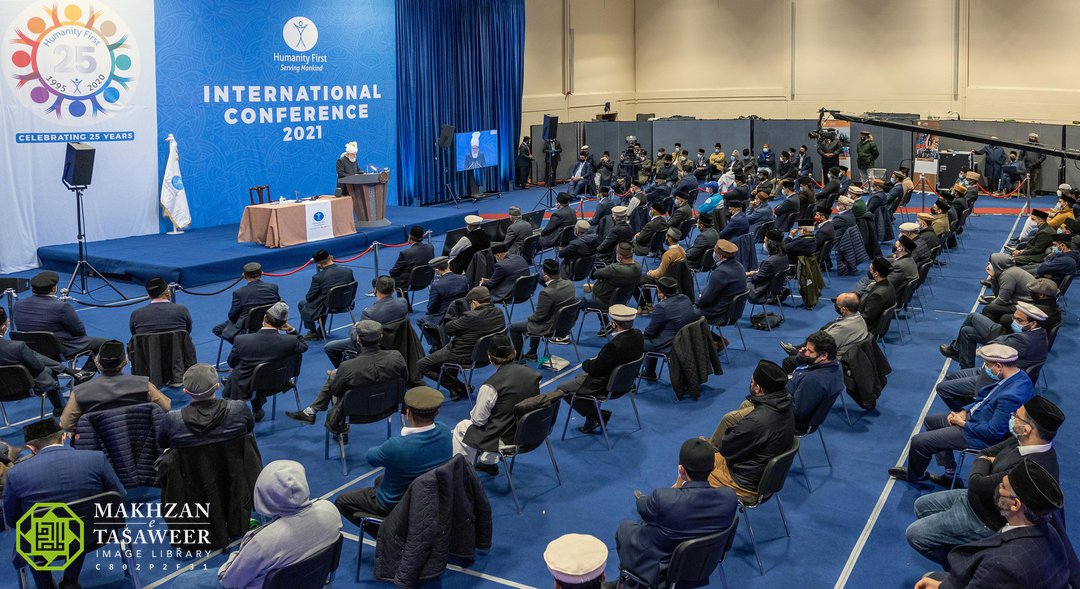 Shining a light on the various teachings of Islam which safeguard the rights of all people in society, His Holiness made particular mention of the rights of neighbours.

“Islam teaches that one’s neighbours have great rights upon them. Muslims have been taught that they must treat their neighbours with grace and compassion and be ever ready to help them in their times of need and grief… Furthermore, the definition of a ‘neighbour’ in Islam is extremely vast and far-reaching. It not only includes people who live nearby, but also includes people who live much further afield, a person’s travel companions, work colleagues, subordinates and many others besides.”

“In reality, the scope of one’s neighbours in Islam is so vast that all members of society can be considered our neighbour and so striving to help all members of humanity to overcome their pain and anguish is the religious duty of an Ahmadi Muslim.”

His Holiness also spoke about the need to look after and support the orphans, the sick and the needy in society.

“It is reported that the Holy Prophet (peace and blessings be upon him) once said: ‘Find me amongst the weak and poor. Surely, you are provided for and helped only due to your support of the weak and deprived.’ Here the Holy Prophet (peace and blessings of Allah be upon him) proclaims that he stands shoulder to shoulder with those who are weak and defenceless and that if a person desires to attain his love and the love of Allah he should seek to help those who are helpless and who are the victims of misfortune.” 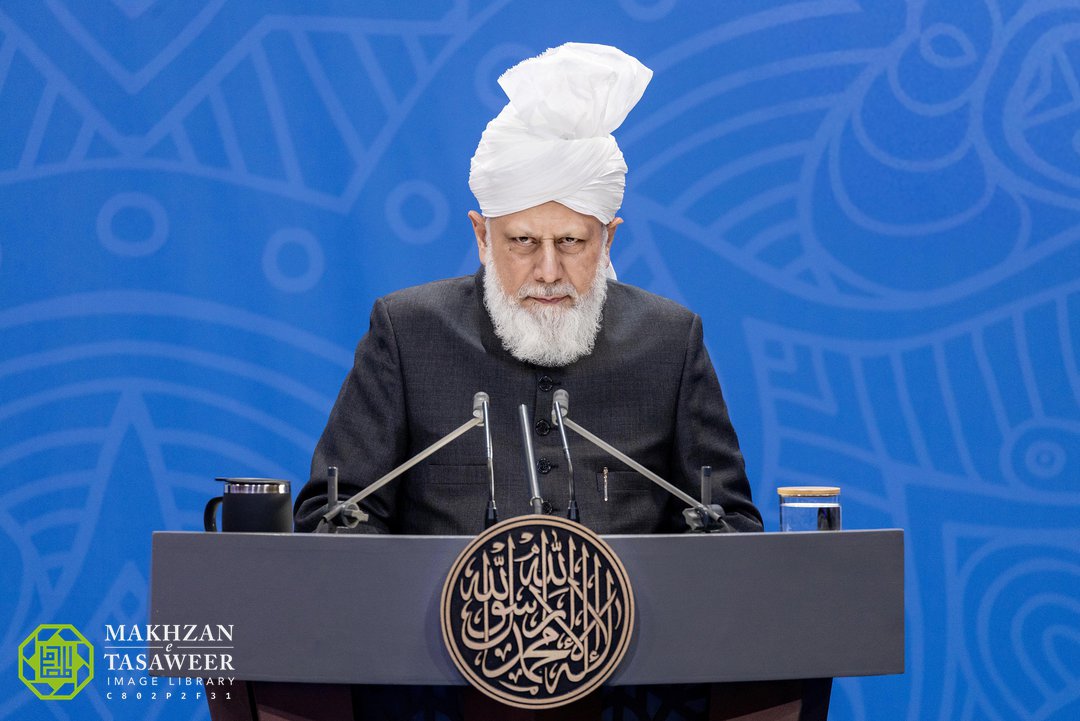 Speaking about the attitude and mind-set that one should have towards performing such service to humanity, Hazrat Mirza Masroor Ahmad said:

“Never let any opportunity to serve those who are mired in poverty or subjected to hardship slip through your fingers and never, God forbid, allow even a trace of pride to enter your mind thinking that you are doing such people a favour. Rather, it is they who are doing you a favour because they are providing you with an opportunity to gain the pleasure of God and to reap His blessings in both this world and the next.”

“Always, the primary focus and desire of every member of Humanity First should be to serve the interests of the weakest members of society, rather than to serve their own self-interest in any way whatsoever. Rest assured that if you serve Allah’s Creation selflessly and for His sake alone, then surely He will reward you in this world and the Hereafter.”

His Holiness emphasised that the inspiration and drive to serve humanity comes from the teachings of Islam and that Ahmadi Muslims should never shy away from this truth and should in fact use this as an opportunity to showcase the shining principles of Islam.

“Wherever Humanity First provides any service or wherever it invites donations, strive to ensure that the people know that you are inspired by Islam’s beautiful teachings and it is your religion that obligates you to serve others with empathy and a spirit of generosity.”

Hazrat Mirza Masroor Ahmad explained that this spirit of selfless service which emanates from the teachings of Islam was embodied in the modern day by the founder of the Ahmadiyya Muslim Community, The Promised Messiah (peace be upon him).

“On one occasion, whilst speaking about fulfilling the rights of mankind, the founder of the Ahmadiyya Muslim Community (peace be upon him) said: ‘To love mankind and to show compassion to others is an immense form of worship of God Almighty and an outstanding means of attaining His pleasure and rewards.’ Enlightening us on how to serve humanity, the Promised Messiah (peace be upon him) said: ‘Allah the Almighty repeatedly commands that, irrespective of religion or ethnicity, you should show love and compassion to all people.’ Allah commands us to feed the hungry, free those shackled in bondage, pay off the arrears of those mired in debt, shoulder the burdens of others and truly fulfil the duties owed to mankind.”

Nearing the end of his address, His Holiness told Humanity First to look to the future and to ensure that it continues to progress.

“It is up to the members of Humanity First to strive earnestly seeking the betterment and well-being of mankind. Never rest easy or feel satisfied with what has gone in the past. Rather, look to the future and see how and where you can increase the scope of your service for humanity. It should always be your objective to provide the maximum possible service, whilst utilising the minimum possible resources.”

“Certainly, I am pleased that the workers and volunteers of Humanity First throughout the world are serving with great zeal and determination and a true spirit of service and devotion. It is my prayer that this spirit never diminishes but only ever increases.”

“May you always be ready to help those blameless souls, who are the victims of their circumstances, to overcome their grief, desperation and heartache. May you always stand up for the rights of the weak, deprived and vulnerable. May Allah enable all of you to play your role in serving the cause of humanity and helping those tormented by abject poverty and deprivation to stand upon their own two feet. May Allah the Almighty bless the efforts of Humanity First and may it never take a backward step.” 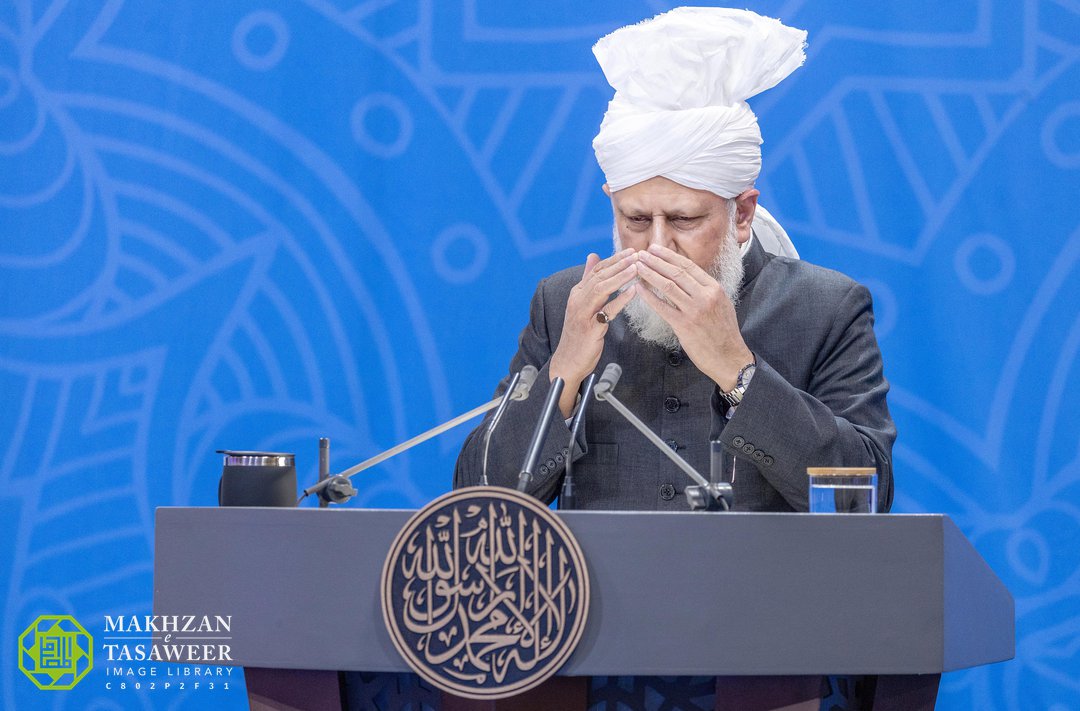 The Conference concluded with a silent prayer led by His Holiness. 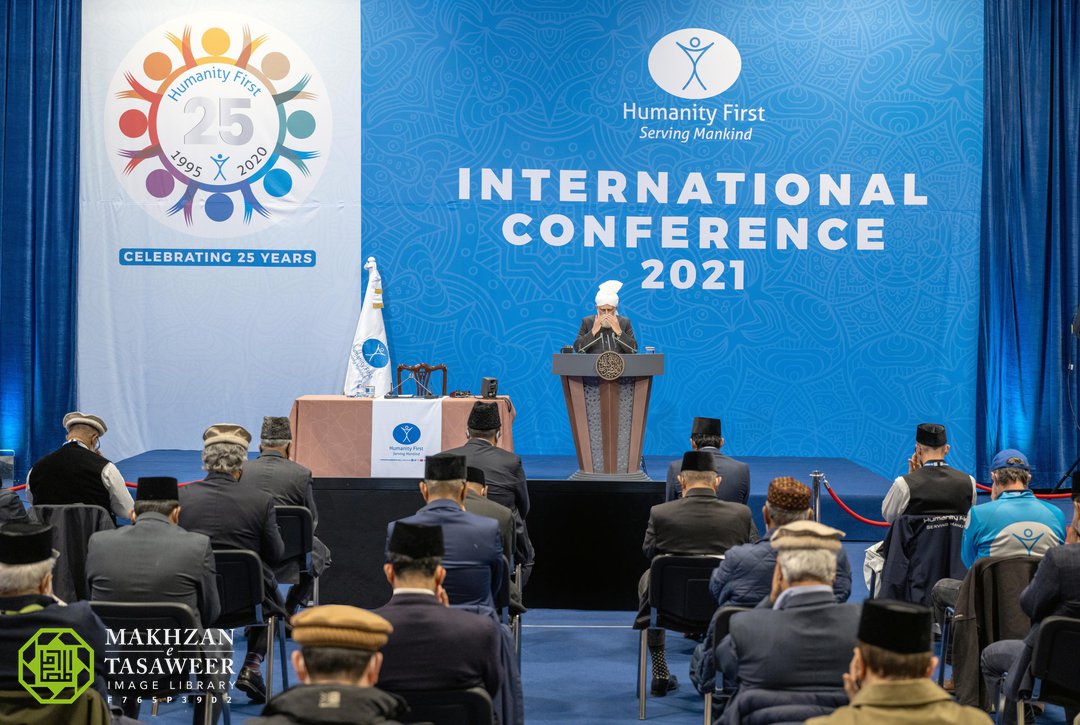 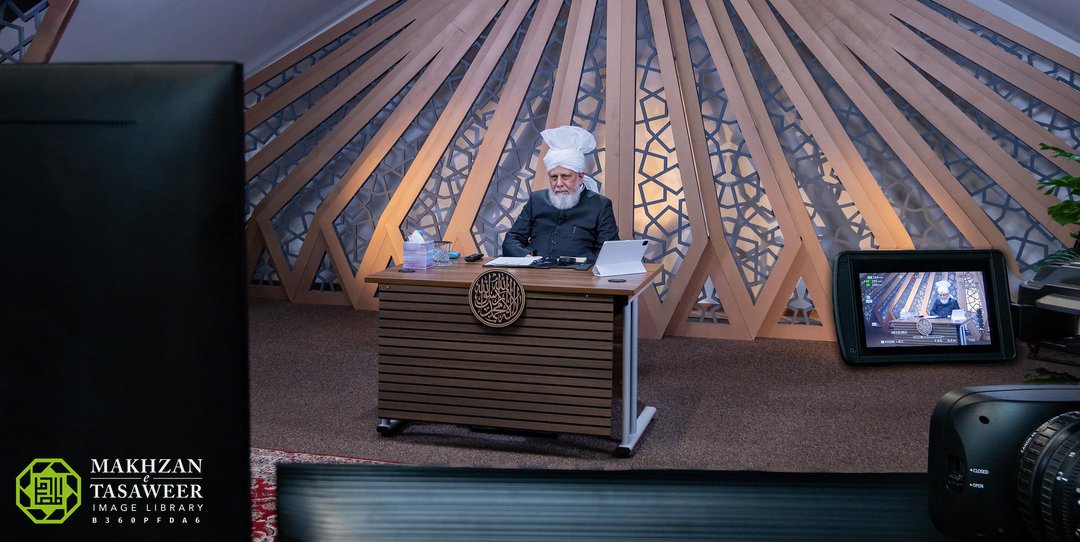