“Every sincere Ahmadi, whether they are European, African, Asian, Arab, or from South America or from anywhere – they are all equal in my eyes…” – Hazrat Mirza Masroor Ahmad

His Holiness presided the meeting from his office in Islamabad, Tilford, whilst the Ahmadi Muslims joined from the Darul Aman Mosque in the West Bank. 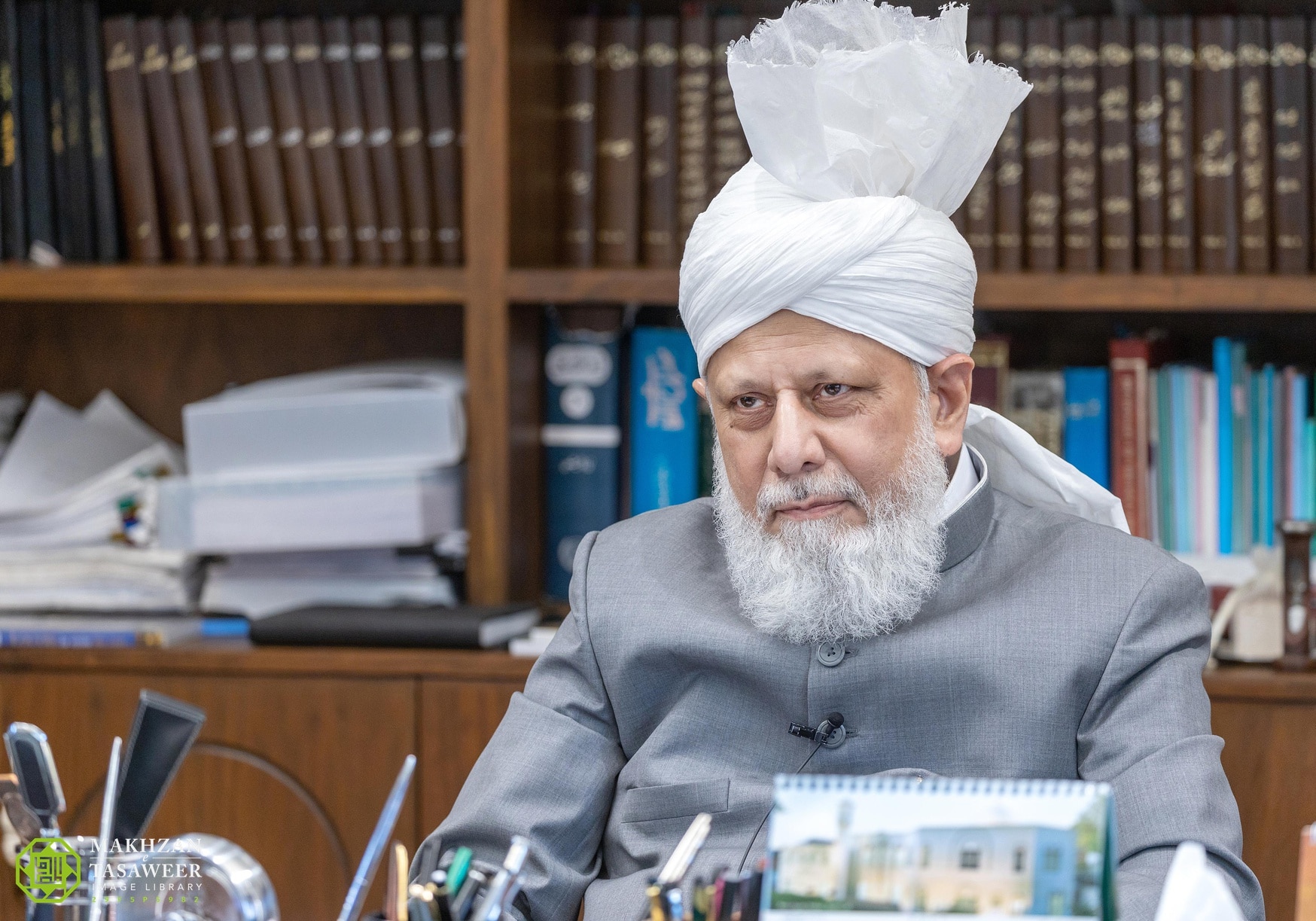 After brief presentations, the Ahmadi Muslim men and women had the opportunity to ask His Holiness a range of questions.

His Holiness was asked if it was permissible for an Ahmadi Muslim to remain silent about their faith due to a fear of persecution from their non-Ahmadi relatives or from the wider members of society.

“If a person believes in their heart in the truth of Ahmadiyyat but is fearful and cannot stand up for themselves then they may keep their belief in the heart and not openly proclaim it. There is no harm in this. For example, it may be particularly difficult for some women to withstand the opposition. However if they have the strength and the courage to withstand the hostility and face it then they should express their faith openly.”

One gentleman asked His Holiness about whether Ahmadi Muslims can join the political parties within their country.

“An Ahmadi Muslim is a citizen of his nation and, as such, he can be a member of the political parties of that country. Indeed, when he becomes involved in a political party his voice will reach those influential people, whom it could not otherwise have reached. Moreover, if he has a role in policy making he will be able to form policies that will prove beneficial for the country, as he will be in a position to present his sincere counsel and to act according to the command of Allah the Almighty that whenever you are asked for your opinion give it with honesty and integrity. So there is no harm in joining political parties, many Ahmadi Muslims do so around the world.”

“Before the Partition of India and Pakistan, some of our members living there were members of political parties and were elected to various political offices. Then, after Partition, until the time that Ahmadi Muslims were declared non-Muslims by the National Assembly, Ahmadi Muslims were elected as members of the National and Provincial Parliaments. In Africa, we have many members who are involved in politics and some have been elected to the National Parliaments and have been appointed as Ministers of State. They all strive to work for the betterment of their nation. Similarly in Europe  and elsewhere we have members who seek political office. So there is no reason for us to avoid entering politics in order to serve our countries.”

“When we are citizens of a country then we should play a part in that country’s form of government and administration. Indeed, we should play a most excellent part so that others can witness just how well we can serve the country and nation in a trustworthy and loyal manner. They should see that, in their capacity as citizens, Ahmadi Muslims are loyal to their country and endeavour to make every effort for its progress.” 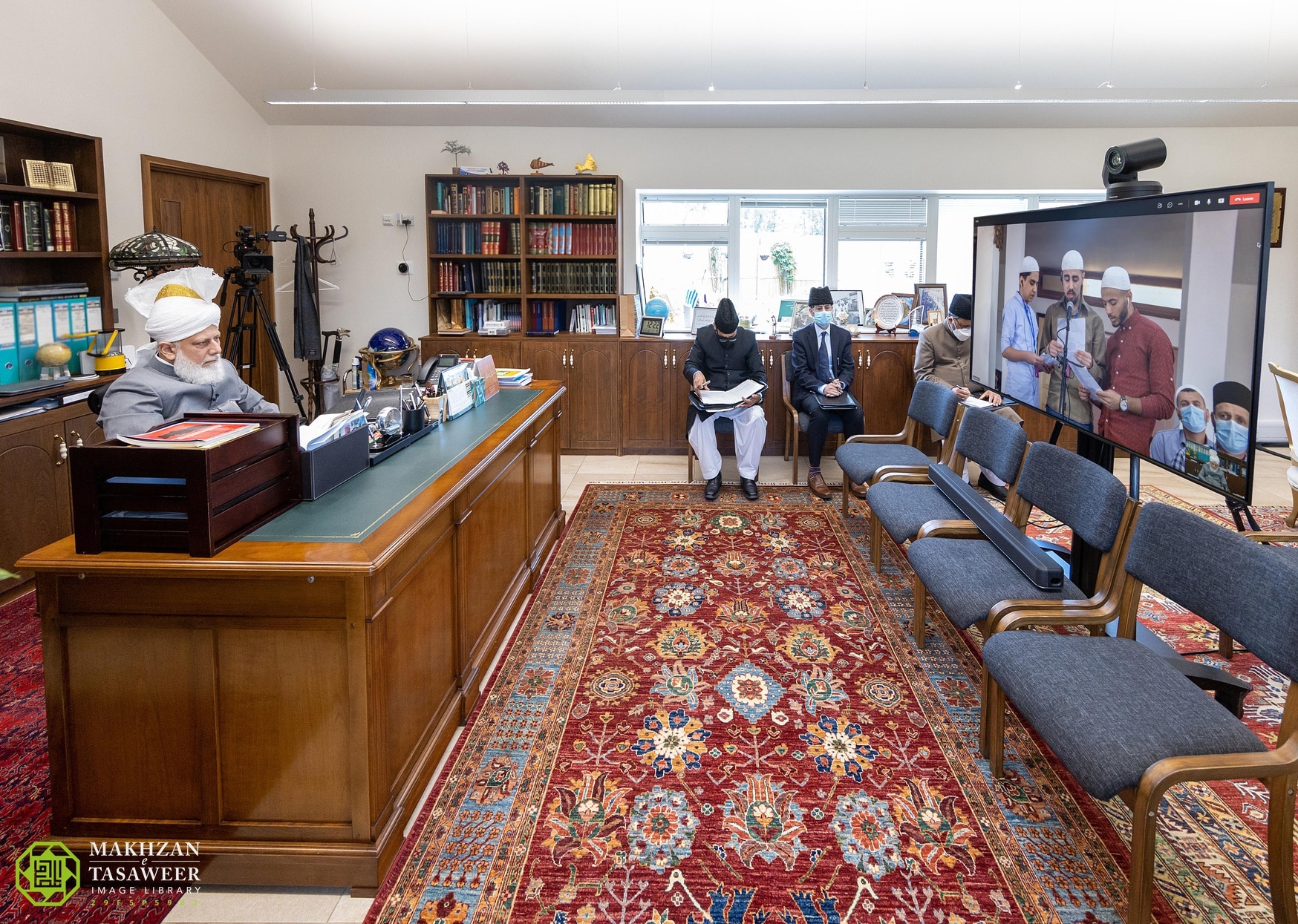 A question was also asked about those resistance movements and organisations operating outside of the control of the government and whether Ahmadi Muslims should engage with such groups.

“As far as resistance movements are concerned, Ahmadi Muslims must avoid any organisation that causes disruption, chaos, violence and destruction. If there is an established government and it organises a protest (against injustice) then Ahmadi Muslims should also take part because that is a governmental action. This includes where a Government determines that it is necessary to take military action and requires its citizens to take part. In many countries, some Ahmadi Muslims have joined their country’s armed forces and fulfil their role as soldiers on behalf of their country.”

“However, Ahmadi Muslims should not join or support any militant groups or other resistance organisations that are not mandated by the government, and whose policies are at odds with their  government. Such groups seek to fulfil their own agendas, merely in the name of ‘freedom’. On the other hand, if the government decrees that now is the time for its citizens to serve and to sacrifice for the cause of the nation then, under such circumstances, Ahmadi Muslims should certainly serve in their country’s military. However, joining non-State actors and groups will only serve to increase the disorder and heighten the conflict.”

Inquiring about spirituality and personal development, a female member asked His Holiness as to how one can recognise when they progress from one spiritual rank to the next.

“The task of a believer is to continuously strive towards righteousness. He should not focus on what is his current spiritual rank or what the next rank is. Allah the Almighty knows where the end of one rank starts and where the start of the second begins. So for a believer you must simply continue to engage  yourself more and more in performing good deeds and to continue to strive in this regard, and to engage in this struggle of purifying yourself continuously… As soon as one has the thought that he has reached such and such spiritual rank then arrogance begins to creep into the person’s mind and arrogance is an incredibly dangerous thing… So one must always strive, and know that his only purpose is to act upon the commandments of God and to thereby attain the pleasure of Allah the Almighty.”

Elaborating further upon the concept of obeying the commandments of God laid out in the Holy Quran, Hazrat Mirza Masroor Ahmad said:

“There are around 700 commandments in the Holy Quran, and in some places the Promised Messiah (peace be upon him) has even said that there are 1200. So have you acted upon all these commandments? Have you truly searched for them? When you have found these commandments and have acted upon then, only then speak about the next step. So it is the task of a believer to constantly, with great humility and meekness, seek the love of Allah the Almighty.”

A particularly touching moment was when His Holiness was asked as to what could be learned from the African members of the Ahmadiyya Muslim Community who seemed to be a source of great happiness to His Holiness whenever he meets them.

“The truth is that I smile at every sincere Ahmadi whenever I meet or see them. I am also smiling upon seeing all of you! Certainly, I have the same emotions of love for you as I have for the Africans and those are the same feelings I have for Europeans. Every sincere Ahmadi, whether they are European, African, Asian, Arab, or from South America or from anywhere – they are all equal in my eyes. And the expressions of love emanating from their faces compel me to love them in the same way and to express the same love and affection that they are showing. There is no difference here. Neither are you less than the Africans, nor are Africans less than you, neither are Pakistanis better than you, nor are Africans more or less than any other people, nor are Europeans. Whoever is a sincere Ahmadi and has a special relationship with Khilafat, whenever I meet them or see them, I smile.” 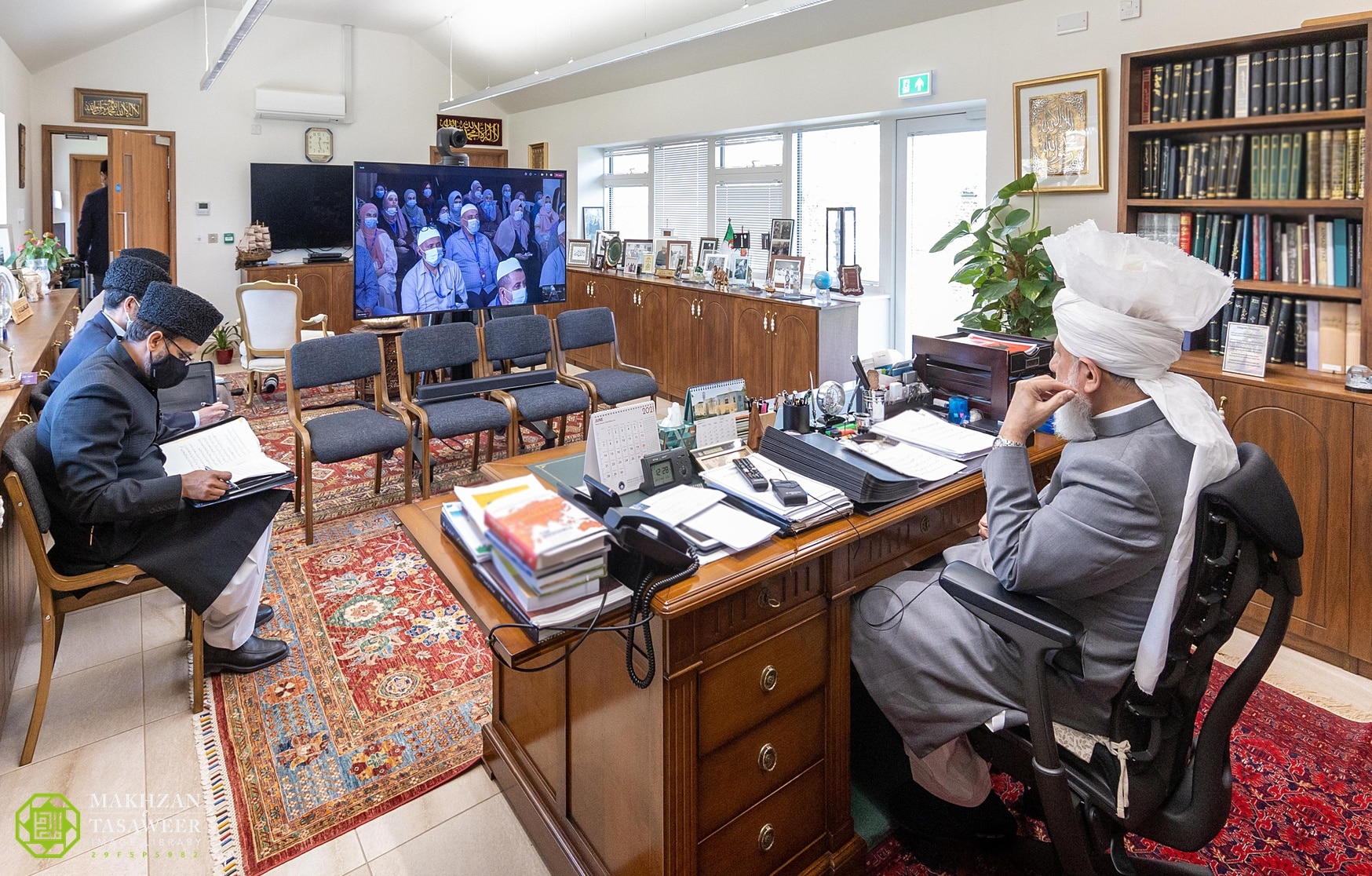 One person asked as to whether an Ahmadi Muslim may continue to be friends with someone who has left the Community but does not engage in opposition to it?

“Yes there is no harm – faith is a personal matter, and a matter of the heart. ‘La ikraha fideen’ – there is neither compulsion nor force in matters of faith. So if someone thinks that the Ahmadiyya Muslim Community is not right and he leaves after a certain period of time, but does not engage in opposition, and does not speak ill of the Founder of the Ahmadiyya Muslim Community, or use disrespectful words with regards to him, then by all means keep a relationship with him. It may be that this very relationship may in future serve as a means of positive change for him and he may return to the fold of the Ahmadiyya Muslim Community. Whereas if you, as his friend, reject him then he will only become more bitter and distant. The duty and obligations of friendship require that you maintain cordial relations and perhaps this will one day lead to the person’s reformation.”

One lady asked His Holiness as to how parents can stop children from too much electronic ‘screen-time’, such as the use of phones or tablets.

“Even scientists and doctors are now saying that too much screen-time has a negative effect on a child’s eyesight and thinking, which is why children should not use the internet or play games or watch television for more than an hour in a 24 hour period. Of course nowadays, as schools have been closed due to Covid 19, a lot of education and learning is being done online. Nevertheless online games are a waste of time and not just a waste of time but also a waste of money as well. You pay to purchase the game and then just as a person becomes addicted to certain things, so too do children become addicted to playing games. Further, during these online games immoral and irresponsible adverts are played and these can dangerously influence the minds of the children.”

Highlighting the responsibilities of parents and providing practical advice on how to approach the issue, Hazrat Mirza Masroor Ahmad said:

“Parents must pay particular attention as to what the game that the child is playing is or what the programme that they are watching on television or online is and supervise this. Moreover make it clear that the child has an allotted amount of screen-time and they cannot watch outside of this time.”

“Talk to your children and explain to them that too much screen-time will be injurious to their eyesight and will impact their thinking and that this is why it is better for them to read books instead, which are better for brain development. Also arrange different activities for them, speak to them, sit with them, hold discussions with them, and if they still insist, then try to show them such programmes online or on the television which will improve them academically and spiritually and will also enable them to gain wisdom.”

At the end of the meeting, His Holiness concluded the gathering with a silent prayer. 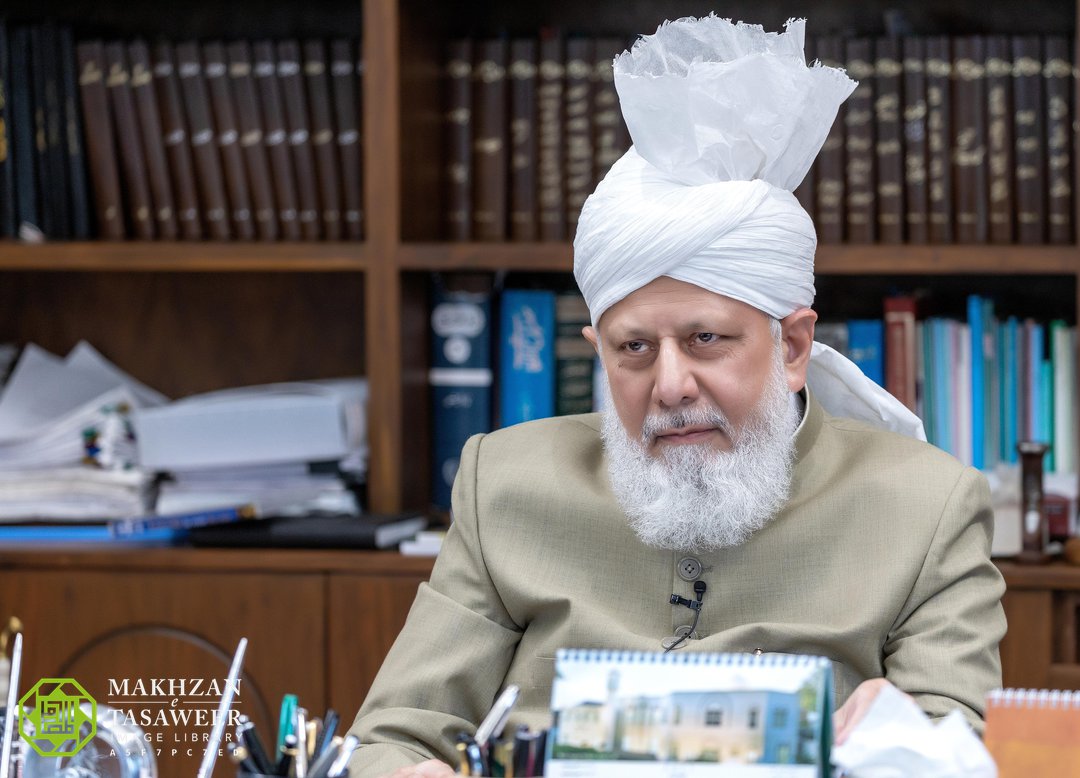 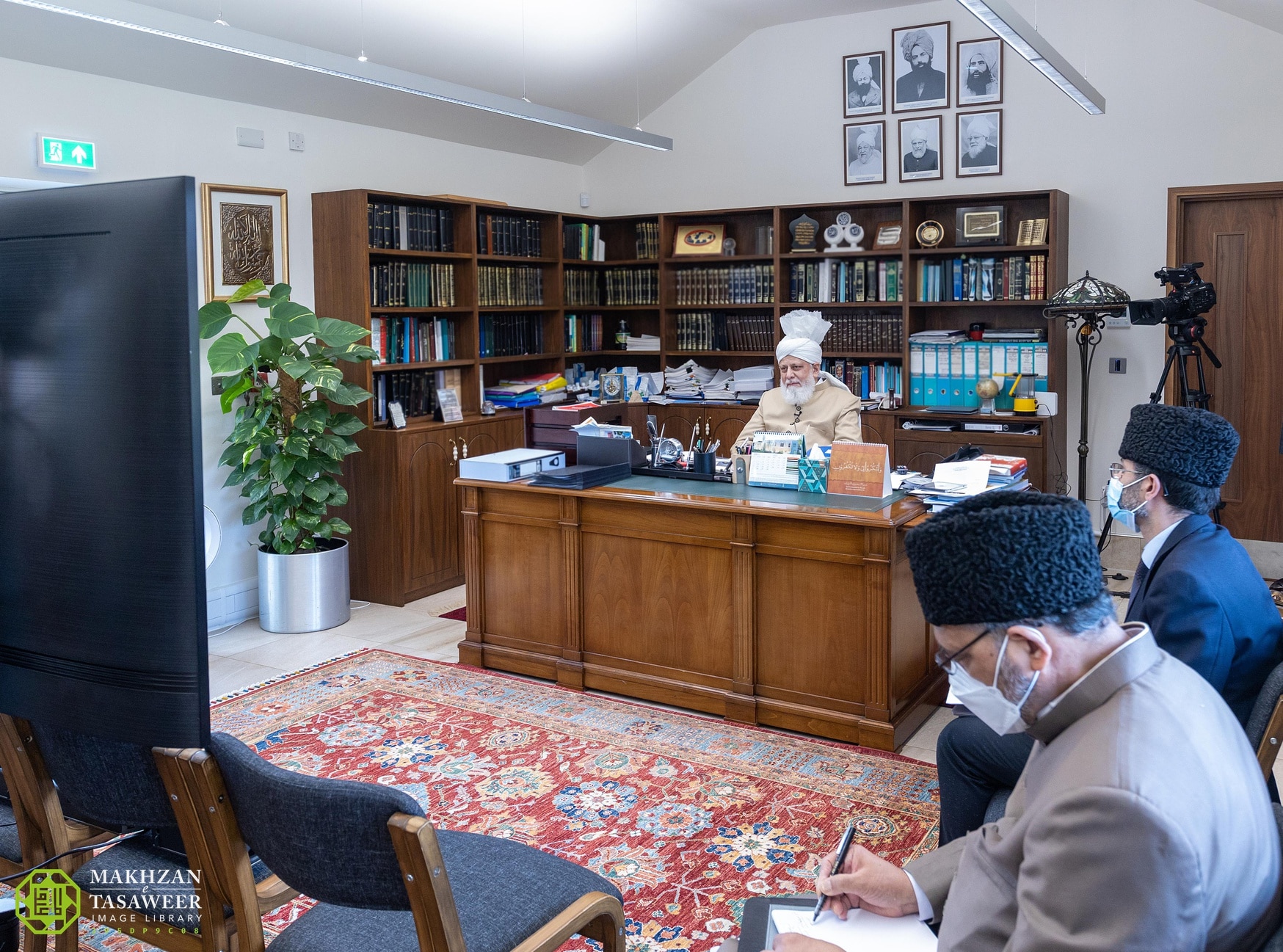