“MTA is eliminating distances, removing barriers and, above all, ensuring that the Community of the Promised Messiah (peace be upon him) remains united at the hand of Khilafat and that Ahmadi Muslims across the world follow exactly the same religious teachings and beliefs.” – Hazrat Mirza Masroor Ahmad

The World Head of the Ahmadiyya Muslim Community, the Fifth Khalifa (Caliph), His Holiness, Hazrat Mirza Masroor Ahmad delivered the keynote address at the conclusion of the MTA International Conference on Sunday 27 June 2021.

His Holiness presided the final session from his office in Islamabad, Tilford, whilst the attendees of the conference joined virtually from the Baitul Futuh Mosque in London and several other studios of MTA International from around the world. 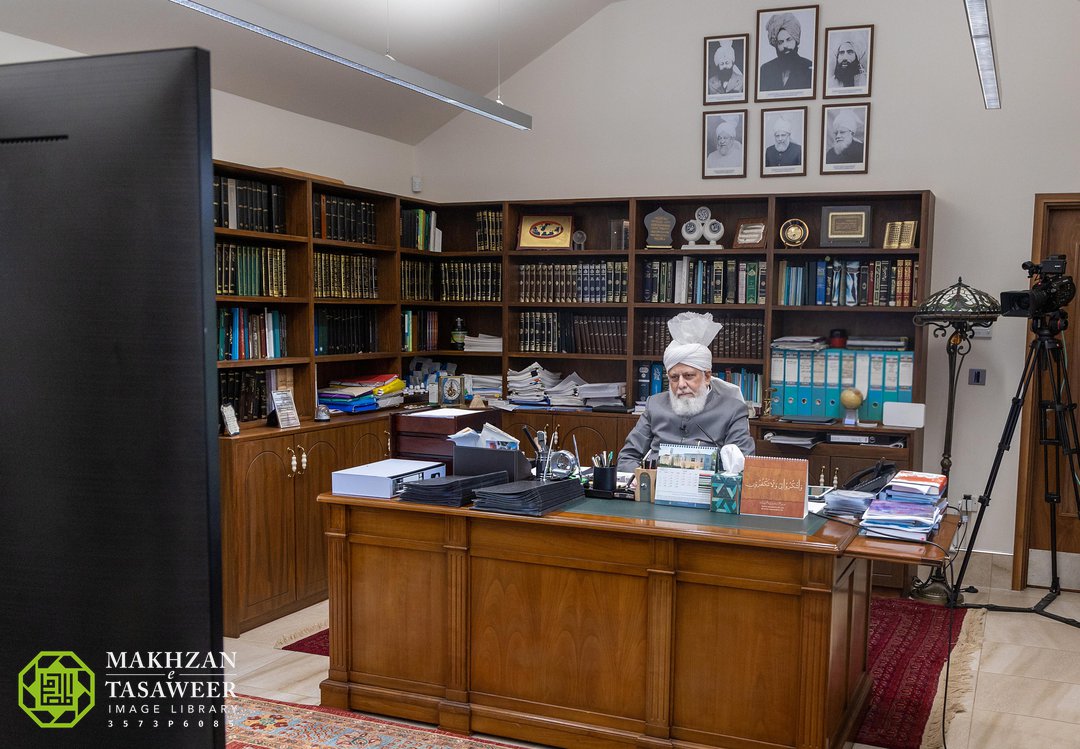 The conference was attended virtually by over 600 participants from thirty countries and included training on increasing productivity and setting goals for the future.

The event began with a recitation of the Holy Quran and a poem, followed by a report of the conference and a video presentation.

In an inspirational concluding address, Hazrat Mirza Masroor Ahmad spoke of how MTA is proving to be an outstanding means of furthering the mission of the Promised Messiah (peace be upon him) to propagate the message of Islam and bring about a spiritual revolution within society. 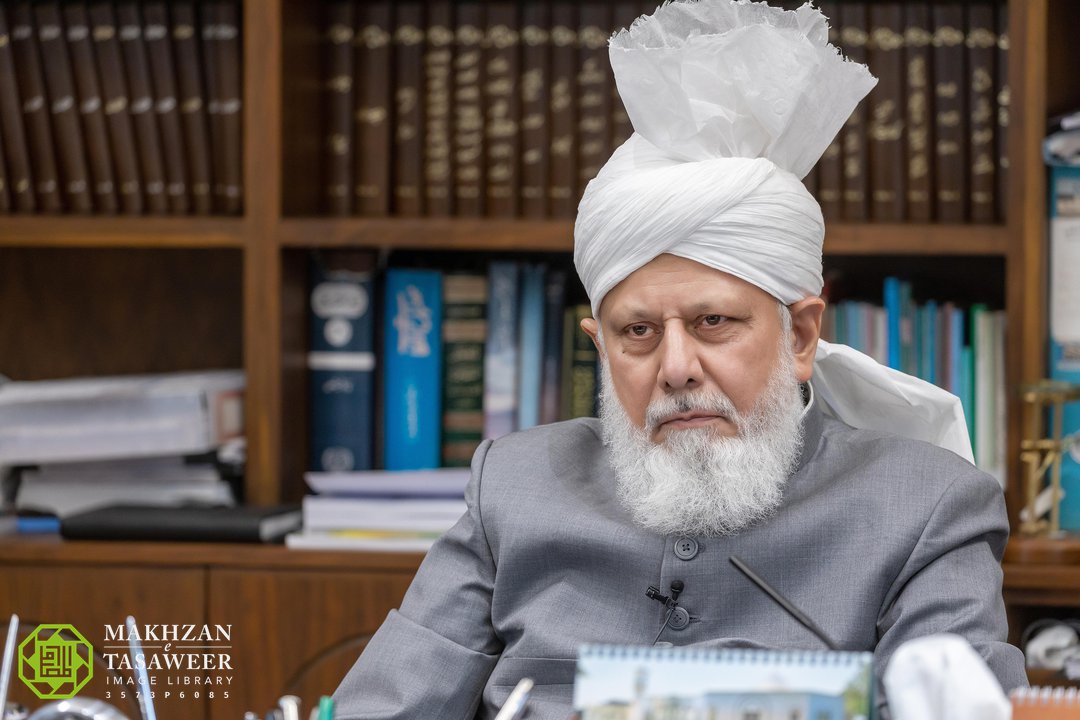 His Holiness said that the Promised Messiah (peace be upon him) had stated that his was to be the era of the ‘completion of the propagation of the perfect guidance’ of the Holy Prophet Muhammad (peace and blessings be upon him). Thus, His Holiness stated that the Promised Messiah (peace be upon him) utilised the printing press to publish books and articles in newspapers to spread the message of the true peaceful teachings of Islam to not just all parts of India but rest of the world too. 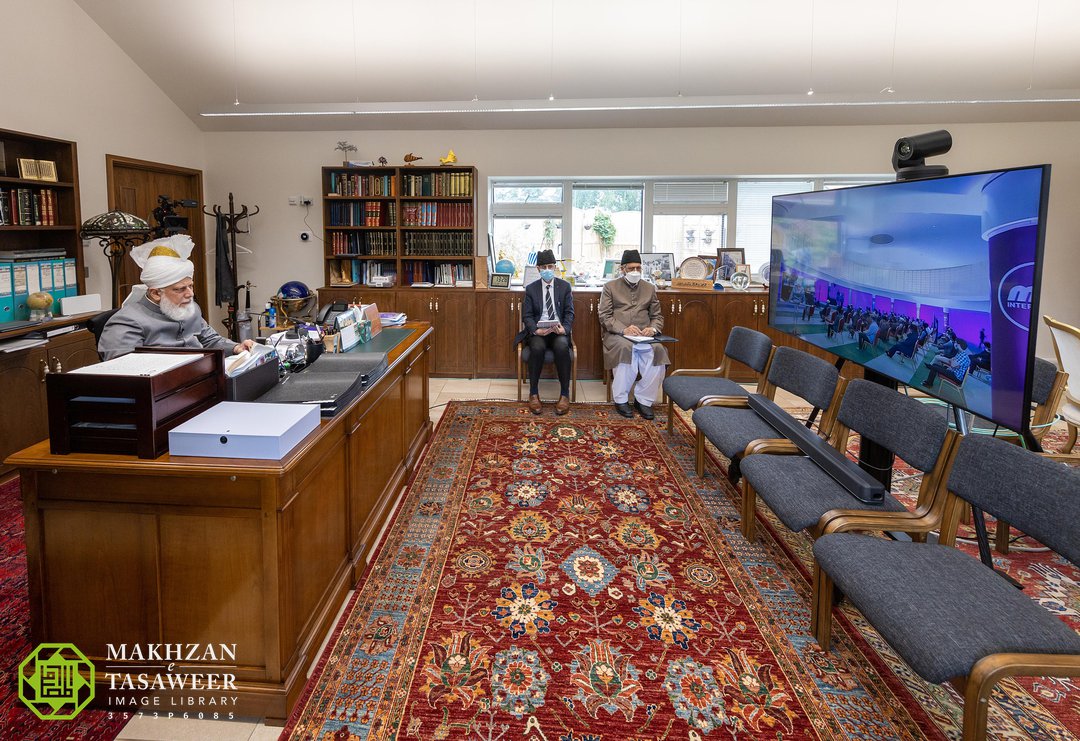 Thereafter in 1938 a new chapter in the history of the Ahmadiyya Muslim Community commenced whereby for the first time a Caliph of the Promised Messiah (peace be upon him) spoke over the loudspeaker and reached a mass audience directly.

“At that moment, where people were rejoicing over the loudspeaker, the Second Khalifa (may Allah be pleased with him) prophesied and declared that the time was surely near when the Khalifa of the Time would deliver a speech in Qadian, whilst simultaneously his voice would be heard in every nation and every corner of the world.”

In the years that followed, His Holiness said the Ahmadiyya Muslim Community’s missionaries were able to acquire occasional slots on public and commercial radio stations. At the time, such efforts were considered as a means of celebration amongst Ahmadi Muslims and a unique way to convey Islam to others, yet now, with the Grace of God, the Ahmadiyya Muslim Community had established its own radio stations in various countries. 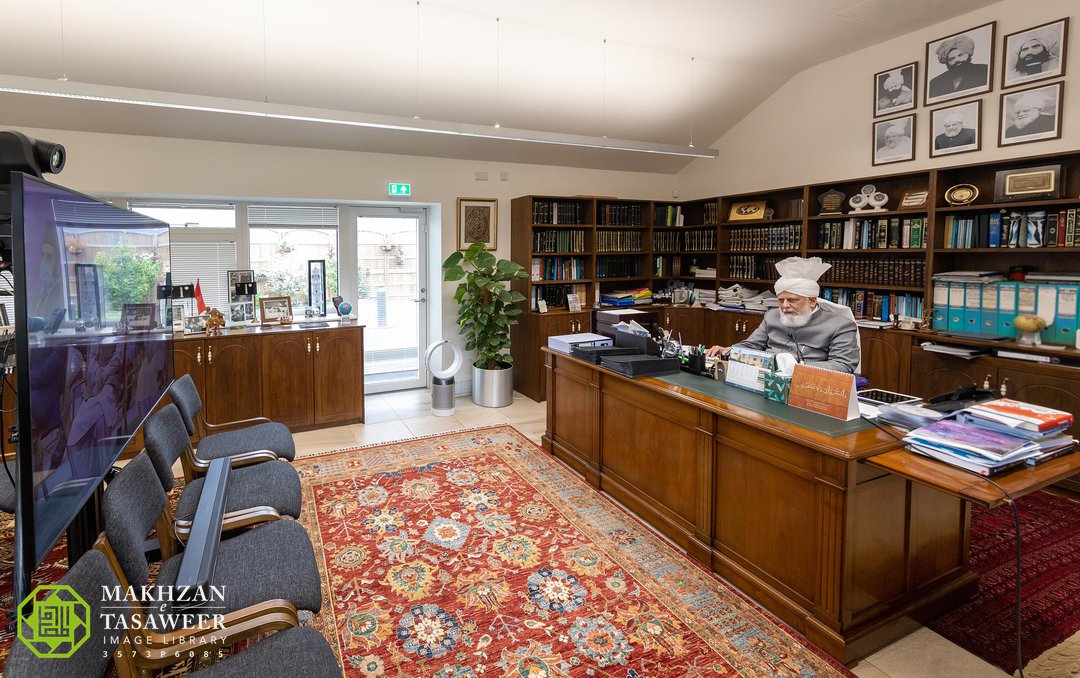 Subsequently, speaking of the breakthrough of setting up a TV Channel, Hazrat Mirza Masroor Ahmad said:

“When Allah the Almighty provided our Community with the inspiration, resources and capability to launch its own TV channel, He also created the means, through satellite, for our channel to broadcast Islam’s exquisite teachings to every corner of the world. Unquestionably, this is a fulfilment of the grand promise and revelation of Allah the Almighty to the Promised Messiah that: ‘I shall cause thy message to reach the corners of the earth’. Alhamdulillah [all praise belongs to Allah], with the sheer Grace of Allah, and in fulfilment of this revelation and prophecy, today 19 MTA Studios have been established globally.”

His Holiness mentioned the vast scope of the present structure of MTA International whereby several studios around the world are equipped with high quality production facilities allowing them to produce recorded and live programmes in several languages on eight TV channels. It was also broadcasting on terrestrial television in certain countries.

Reflecting on the limited resources with which all this is being achieved to spread the message of the Promised Messiah (peace be upon him), Hazrat Mirza Masroor Ahmad said:

“If we analyse our financial and human resources in purely worldly terms, the truth is that we could never have accomplished all of this on our own. In reality, whatever has been achieved has been the result and fulfilment of that divine promise and revelation that: “I shall cause thy message to reach the corners of the earth”. Each and every day we are witnessing with our own eyes the glorious manifestation of the Help and Favours of Allah the Almighty. Where initially there was just one MTA channel, now Allah the Almighty has enabled MTA to launch several channels that are broadcasting in different languages across the world.” 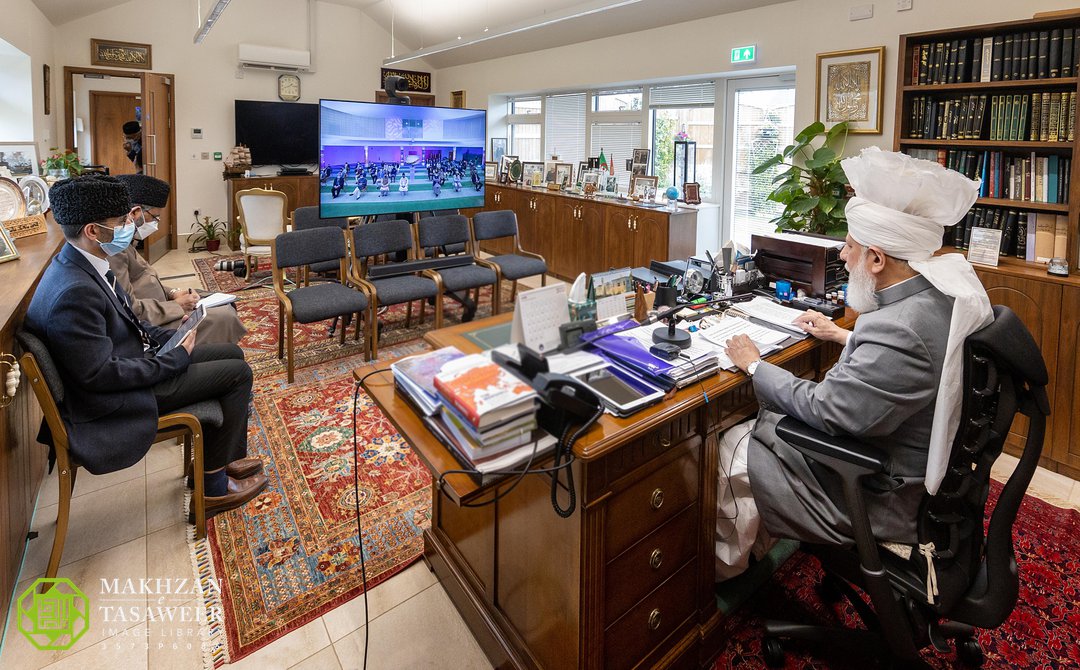 His Holiness also outlined the increasing variety of content being produced for all ages, including children’s programmes for their moral and spiritual progress and also content to introduce the peaceful and beautiful message of Islam to those outside the Ahmadiyya Muslim Community.

His Holiness stated that MTA International has served as a unique medium for facilitating contact between members of the Ahmadiyya Muslim Community and their spiritual guide. 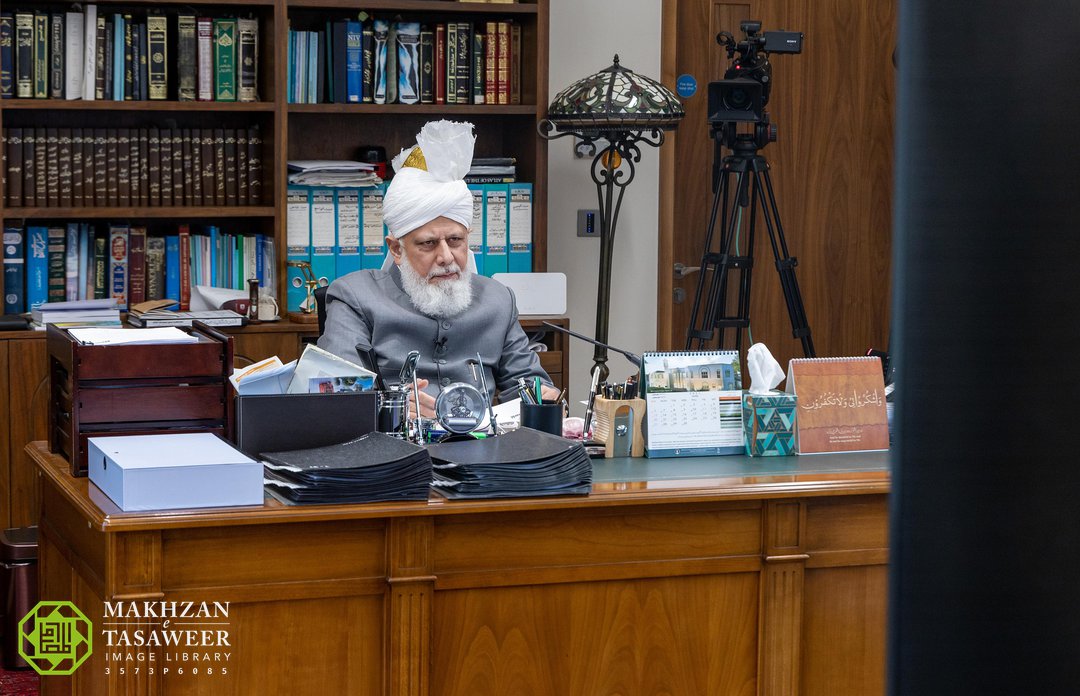 Speaking of how such direct contact and communication through MTA had flourished during the Covid-19 pandemic, Hazrat Mirza Masroor Ahmad said:

“During this period (of Covid-19), I have not been able to travel on tours and nor have Ahmadis been able to visit me. Yet through the blessings of MTA, the direct contact and communication between Khalifatul Masih and the members of the Community has not only continued but has increased and reached new heights, Alhamdulillah. Apart from the weekly Friday Sermon, which is broadcast live around the world, a new avenue of Mulaqat [meeting] – the Virtual Mulaqat – has emerged during this period.”

“Through these interactive Mulaqats, I am able to meet directly with members of the Community from around the world and to hold meetings with office bearers. One day I am meeting Ahmadi Muslims from Australia, the next day from Indonesia or the United States. Or from Qadian, Europe, Africa, Canada and other parts of the world. Whilst sitting here in Islamabad, the words and voice of the Khalifa of the Time are reaching every corner of the world.”

His Holiness mentioned the impact of these virtual meetings, the highlights of which are being broadcast on a weekly basis on MTA, allowing Ahmadi Muslims around the world a deep insight into the guidance His Holiness gives during the meetings.

“MTA is eliminating distances, removing barriers and, above all, ensuring that the Community of the Promised Messiah (peace be upon him) remains united at the hand of Khilafat and that Ahmadi Muslims across the world follow exactly the same religious teachings and beliefs. From one corner of the world to the next – from Asia to Europe, from Africa to the Americas, from the Far East to the various islands of the world, from the East to the West, from the North to the South – the teachings of the Promised Messiah (peace be upon him) and the instructions of the Khalifa of the Time are reaching all nations and peoples through MTA.”

Addressing Ahmadi Muslims, His Holiness said they ought to be grateful to the men and women selflessly working and volunteering at MTA International.

“All Ahmadi Muslims should be grateful to those who are serving in MTA. This includes the permanent workers and staff, who are serving with great passion and sincerity. Whatever allowance or salary they are given is minimal compared to what they would earn if they worked in worldly environment. Furthermore, in our various studios around the world, there are hundreds or even thousands of volunteers who, despite not being paid staff, are working tirelessly and with great devotion. If one considers the time, effort and skills they are contributing it is no exaggeration to say that they are saving the Jamaat millions of pounds each year through their efforts.”

His Holiness narrated the startled reaction of a senior politician from the United States when His Holiness explained to him that all of MTA’s channels and studios are run without any state funding or commercial income through advertisements.

“Indeed, for worldly and material people it is surely impossible to comprehend how MTA can not only survive as a global channel but actually thrive without any form of commercialisation. Yet, they do not realise that MTA is a manifestation of that grand promise of Allah the Almighty vouchsafed to the Promised Messiah (peace be upon him) that ‘I shall cause thy message to reach the corners of the earth’.” 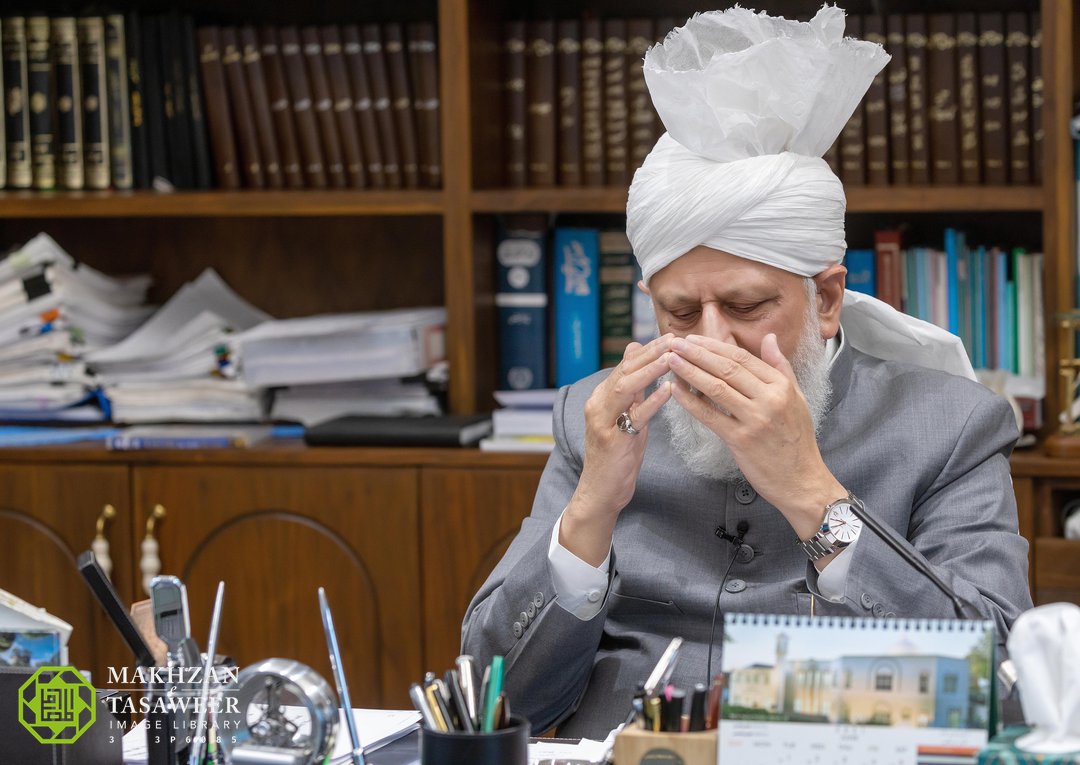 Concluding his address, His Holiness again expressed his gratitude to MTA staff and volunteers and reminded them to always serve with humility.

“No matter what is asked of them they continue to serve and do so with a smile on their faces and with great dedication. Certainly, my heart is filled with gratitude for all of you. May Allah the Almighty reward you and may He enable you to continue to serve with humility and selflessness. May He enable all of you to play your role in spreading the message of the Promised Messiah (peace be upon him), which, in reality, is the message and teaching of the Holy Quran and the Holy Prophet of Islam (peace be upon him).”

“I also always pray that you remain humble and never allow even a trace of arrogance or pride to enter your hearts. Never think that the success of MTA or the Jamaat is contingent upon your skills or your time or that you are deserving of praise or material reward. Most certainly, if you remain forever sincere and devoted and serve with true humility, you will attain the very best of rewards from Allah the Almighty Himself.” 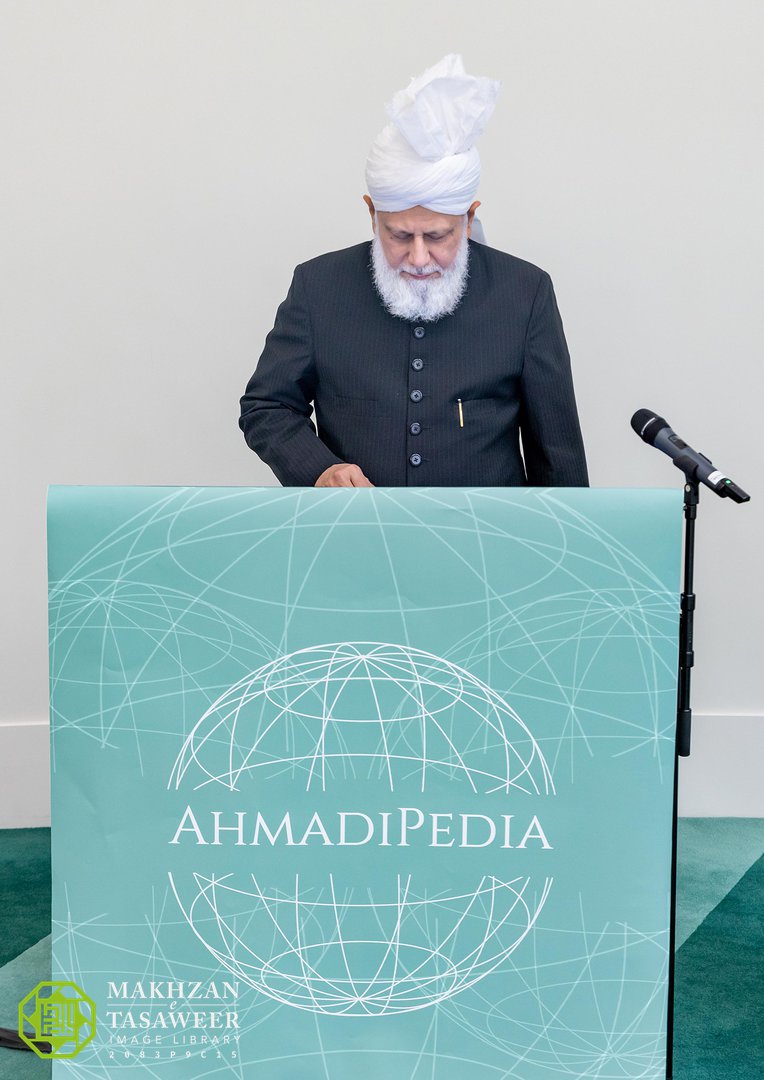