On 22 May 2021, 15 journalists from The Gambia were granted a virtual press conference with the World Head of the Ahmadiyya Muslim Community, the Fifth Khalifa (Caliph), His Holiness Hazrat Mirza Masroor Ahmad for the very first time.

His Holiness presided the conference from his office in Islamabad, Tilford, whilst members of the media joined virtually from the MTA International Gambia Studios in Banjul. 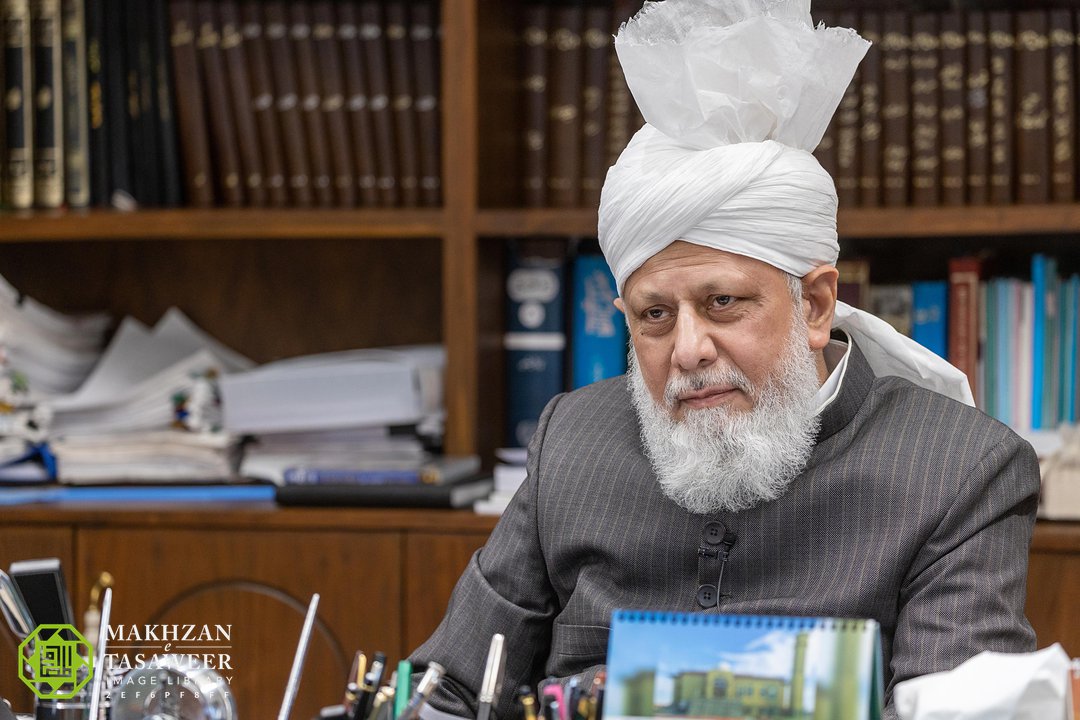 During the 55-minute meeting, the journalists had the opportunity to present questions to His Holiness, including questions about the latest incarnation of violence in the Middle East, the lack of unity amongst Muslim nations and how to achieve lasting world peace.

Referencing the book of His Holiness, ‘World Crisis and the Pathway to Peace’, one journalist asked about the continued emphasis of His Holiness on need for justice in society. In response, His Holiness said that justice was the pre-requisite for peace and that society could only truly flourish when there was true equity and fairness at all levels of society, from within one’s home all the way to international relations. 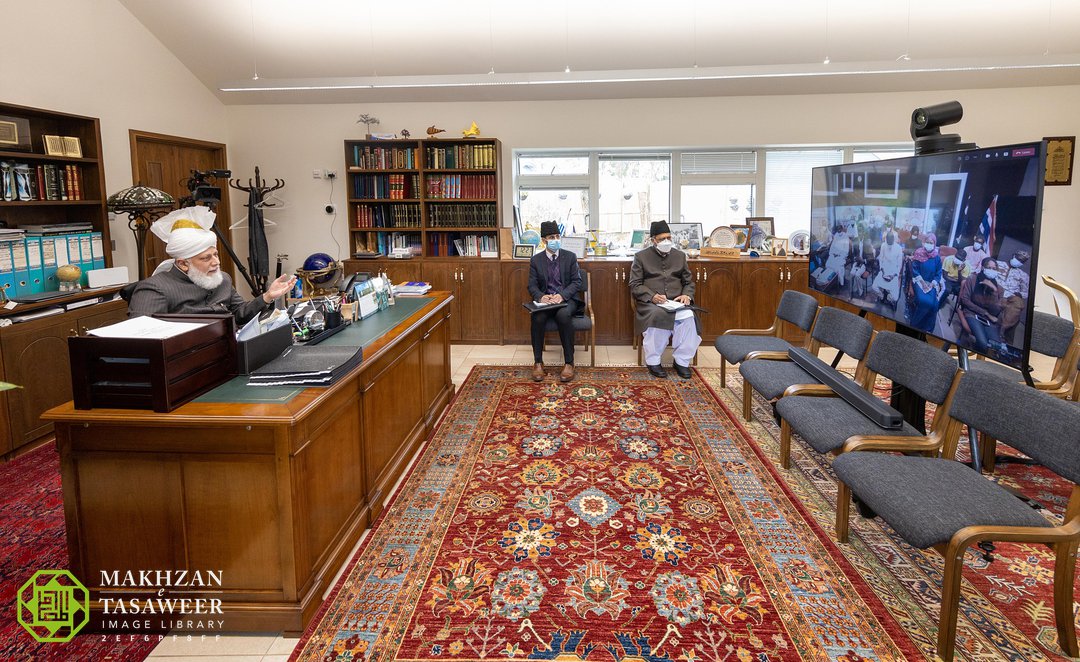 “In the case of world affairs, if there’s no justice, there’s no peace. If you have double standards, as we can see in today’s world, shown by the major powers, they cannot maintain peace in the world. This is what happened when League of Nations was formed. The League of Nations was formed to maintain justice and give equal rights to each and every nation. But it failed. Resultantly, there was an eruption of second World War.

Comparing the trajectory of the United Nations today to the failure of the League of Nations, Hazrat Mirza Masroor Ahmad said:

“The same is happening with the United Nations – they are not maintaining justice. They have different standards for poor countries and for the rich countries – for Western countries and African and Asian countries. And this is why we can see there is disturbance in the world today. So, if there is no justice there is no peace. This is why the Holy Quran says and the Holy Prophet of Islam (peace and blessings be upon him) said, that you have to establish justice and then you can see peace in society, in your local level, in your houses and at the international level at large.”

Another journalist mentioned a saying of the Holy Prophet Muhammad (peace and blessings be upon him) that if you see a wrong, correct it with your hands; if you are unable to do so then admonish against it and if someone is unable to do so then they should dislike it in their heart. The journalist went on to ask about what the Ahmadiyya Muslim Community could do for the plight of the Palestinians.

His Holiness stated that, within its resources, the Ahmadiyya Muslim Community was advocating for the rights of the Palestinians and against all forms of injustice. 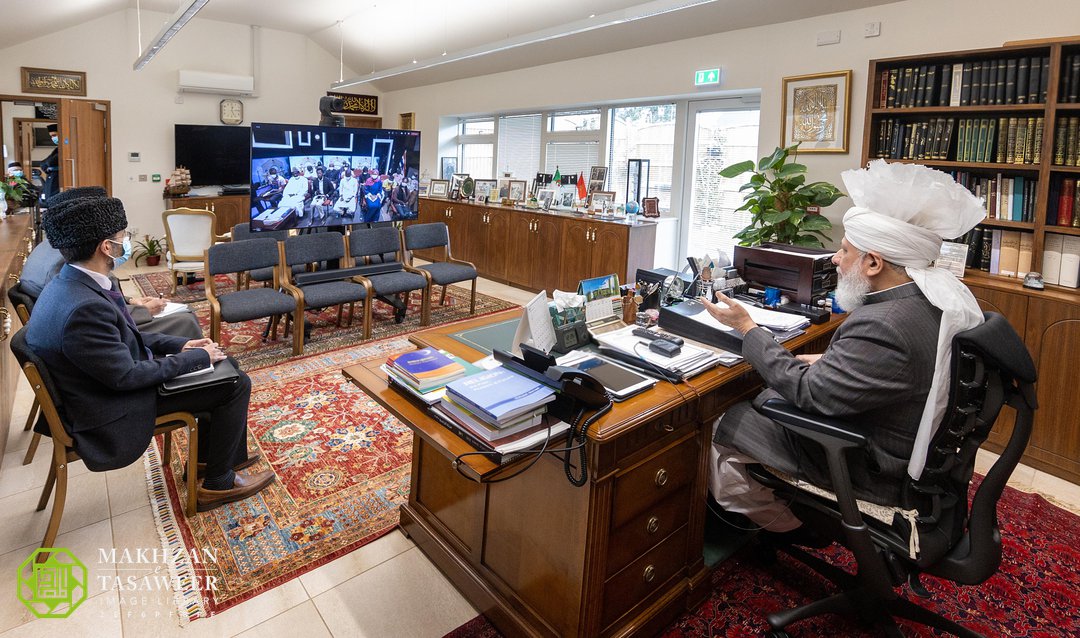 “We don’t have worldly power. We are not running or ruling any country. So here, as with regards to ‘power’, we cannot use it. As far as disliking or stopping it through the word of mouth or by saying something, this is what we have been doing all the time. In my last Eid Sermon, I spoke against the cruelty and brutality that was being committed or is being committed against Palestinian. There is no balance of power. Israel is the fourth superpower of the world and Palestinians are just a small, resourceless people and they cannot respond in the same way. They are just bearing all this cruelty.”

In response to another question, His Holiness highlighted the need for unity amongst Muslim-majority countries in order to strive for the rights of Palestinians.

“There are around 54 countries in the Muslim world – if they are united and their words are the same – if they use the same language urging all to maintain the peace of the world, then you will see that there is a big change. But regrettably, the Muslim world is not united. Every Muslim leader has their own vested interest.  Our opponents know this – those who are against Islam – that Muslims are not united so they can do whatever they like. And so the practical solution is that the Muslim world should unite.”

In response to a question about how the Muslim world could actually unite, Hazrat Mirza Masroor Ahmad said:

“Instead of seeing their own national and political interests, or personal interest, each and every (Muslim) leader should consider and try to think of the larger interest of the Muslim Ummah.”

Thereafter, His Holiness stated that the division and disunity in the Muslim world is according to the prophecies of the Holy Prophet Muhammad (peace and blessings be upon him) and relate to a time in which the Promised Messiah (peace be upon him) was to come.

The solution, according to the prophecies of the Holy Prophet Muhammad (peace and blessings be upon him) was to believe in and accept the Promised Messiah (peace be upon him).

“So the Muslim Ummah should unite and the solution which Allah the Almighty has given us and that the Holy Prophet (peace and blessings be upon him) has told us is that when the Reformer of the Age comes, accept him. In my view, this is the only solution.”

Another journalist asked why it was proving so difficult for the current generation of humanity to achieve true peace, despite living in a world that is more technologically advanced than at any other time in history.

“In this materialistic world, although we have technologically advanced, but our greed has also increased. The whole world is a global village now and so we can see that such and such nation has ‘better facilities, they are more advanced, they are rich, we are poor.’ And that is causing frustrations among the people. And so this technological advancement has created frustration and so they are trying to snatch others’ assets and property.”

“Millions of dollars are being collected from the African nations by the biggest powers in the name of establishing peace in their countries or for the development of their countries. But in reality, it is not being spent on them. Had it been spent properly on the African countries or the poor countries of the world – whether it is in Asia or Africa or elsewhere – there would not have been a poverty level as we can see today. So, although we say that there is technological advancement, where that advance has brought us together, at the same time, it has created enmity.”

In response to another question about the role that the Promised Messiah (peace be upon him) was to play in bringing about peace, Hazrat Mirza Masroor Ahmad said:

“He [the Promised Messiah (peace be upon him)] claimed that Allah the Almighty has sent him to bring the whole Muslim Ummah onto one hand and to draw the attention of the whole mankind to realise their duties towards their Creator and to each other. So, this is the mission of the Imam Mahdi and the Promised Messiah and during his lifetime, he discharged his duties and tried to spread his message as far as it could reach. And now we are trying to spread the message of the Imam Mahdi (peace be upon him) and people have started realising it and those who understand it they are trying to join us, they come to join us.”

“You cannot say that within two or three years or within a short period of time you can achieve your target. But that is our mission and we hope that one day we shall achieve it and the world will realise their duties towards their Creator and their fellow beings and once they realise it, then that will be the time when you will see the world living in peace and harmony.”