The National Amila of Lajna Imaillah Indonesia have official meeting with His Holiness.

His Holiness presided the meeting from his office in Islamabad, Tilford, whilst the Amila members joined from the Ar-Rahmat Hall at the Al-Hidayah Mosque complex in Jakarta.

“Ensure the proper moral and spiritual training of the Waqifat-e-Nau. Each and every female member of Waqf-e-Nau should be regular in offering the five daily prayers. They should read the Holy Quran every day. They should read the books of the Promised Messiah (peace be upon him) which have been translated into Indonesian and other appropriate literature. They should try to listen to my Friday Sermons every week and you should make sure that all female members of Waqf-e-Nau are closely connected with the system of the Ahmadiyya Muslim Community and that they are connected with Khilafat and they spend time in learning religious knowledge.”

Later, the National Secretary for Sanat-o-Dastkari (Arts and Crafts), exhibited a range of products produced or cultivated by Lajna members from across the country, including vegetables, fruits, bags, buckets, herbal remedies and juices. With the assistance of the department, some of the women had gone on to set up their own businesses using the skills they had learned. His Holiness appreciated the effort that had been made by the women. 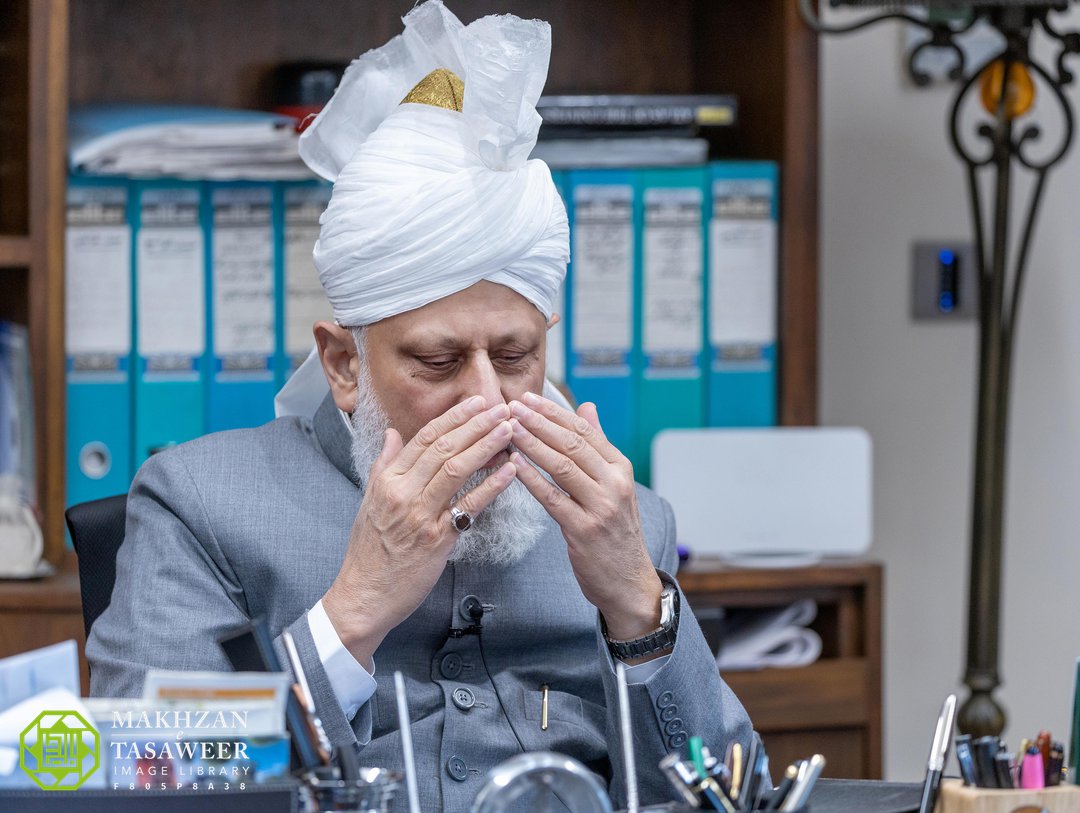 As the meeting neared conclusion, some of the attendees asked His Holiness for guidance and direction on various matters.

One Amila member asked how to increase the number of people making financial sacrifices for the sake of Allah the Almighty.

“You should make the members realise that financial sacrifice in the Ahmadiyya Muslim Community is not a tax. It is the duty of every true believer that they should make sacrifices and indeed to make financial sacrifices for one’s faith is written in the Holy Quran. In the second chapter of the Holy Quran, Al-Baqarah, Allah the Almighty says a Muslim should have ‘belief in the unseen’, should offer their prayers and should offer sacrifice in the way of Allah. And so this is the commandment of Allah, that you should make some financial sacrifice for the running of the day to day expenses of the Community and primarily for spreading the message of Allah the Almighty in one’s country in particular and in the whole world in general. So we are sacrificing for the sake of gaining Allah’s pleasure.”

“There are quite a number of Quranic verses which refer to the importance of financial sacrifice. There are also quite a number of Sermons of the previous Caliphs of the Ahmadiyya Muslim Community about this topic and I have also delivered many Sermons in which I have explained in detail and at length, the importance of sacrifice. Thus, let the members understand that this is not a tax. So if they sacrifice happily and wholeheartedly, then Allah the Almighty will reward them.”

Another Amila member asked His Holiness how they could increase the interest of members of Lajna Imaillah in reading the books of the Promised Messiah (peace be upon him).

“You should try to select some passages from the books of the Promised Messiah (peace be upon him) which are related to women and relevant to their day to day life. Translate those parts into the Indonesian language. In this way, you will increase the interest of the ladies and the older Nasirat… Once they develop an interest, then they will start reading the other books as well.”

In response to a question about how best to increase the number of those regularly taking part in Tabligh (outreach) activities, Hazrat Mirza Masroor Ahmad said:

“Develop confidence in the Lajna members. Prepare a syllabus,  a Tabligh course and train them so that they can answer basic questions whilst doing Tabligh. Also, make some Tabligh CDs or DVDs that will teach them how to answer questions. They should include the answers to the questions raised by non-Ahmadi Muslims or by non-Muslims. They can also be played to their contacts so they would find out the answers to their questions.”

X
Arab Ahmadi Muslims Living in Germany have Honour of a Virtual Meeting with the …Press Releases“You should have complete understanding and faith in the Promised Messiah (peace be upon him), that he is the Messiah and Mahdi as prophesied by the H…