It was not a surprise for Ahmadi Muslims to hear General Sir Nick Carter’s warning about the risk of World War III, as his comments follow many similar warnings given by Hazrat Mirza Masroor Ahmad, the Caliph of the Ahmadiyya Muslim Community.

The Rhythm of History

In an interview on Remembrance Sunday, General Sir Nick Carter, the UK’s chief of defence staff, spoke of forgetting the “rhythm” of history and reminded us of the impending risks of another World War. 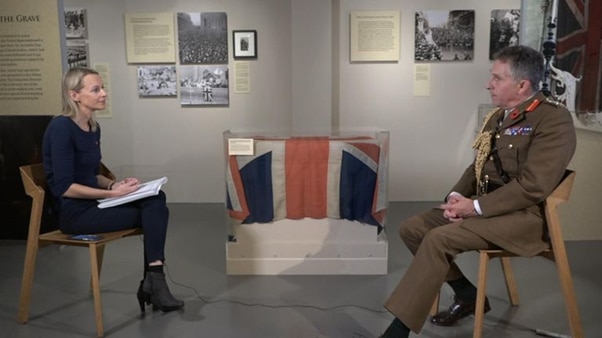 When speaking to Sophie Ridge on Sky News, he spoke of how escalating tensions had on many occasions led to war:

“If you look back at the last century, before both world wars, I think it was unarguable that there was escalation which led to the miscalculation which ultimately led to war at a scale we would hopefully never see again.”

Certainly, General Carter is neither alone, nor the first to be concerned about the risk and devasting consequences of a third world war.

His Holiness, Hazrat Mirza Masroor Ahmadaba, the Head of the worldwide Ahmadiyya Muslim Community, has long warned of the devastating consequences of nuclear war, which could well leave us with little but carbonised sticks and radiation contaminated stones.

Numerous studies of war and peace have been instrumental in aiding our understanding of how wars start, how they end and what helps to prevent them. Among other reasons, competition for and exploitation of resources, changes in the environment, economic depressions of the like brought about by COVID-19, refugee crises and racial injustice all exacerbate the risk of conflict.

These are subjects that His Holiness, Hazrat Mirza Masroor Ahmad has on many occasions spoken about, urging equality and justice at all levels of society in order to cool geopolitical tensions that are rising in many parts of the world.

Against the backdrop of injustice, conflict and the devastating consequences of COVID-19, General Carter was right to highlight nationalism as a self-preserving mindset that could lead to war.

His concerns are well placed. In the periods before World War I and World War II, it was isolationism, nationalism, economic uncertainty and a retreat from internationalism that preceded those global conflicts.

Pessimism or an uncomfortable truth?

In May 2013, His Holiness Hazrat Mirza Masroor Ahmad delivered an historic address in Beverly Hills, California, USA, in which he expressed grave concern at the prospect of war.

“The direction the world is moving in suggests that the dark shadow of war is being cast over a very large part of the globe. If war breaks out then countless innocent women, children and elderly people will all die. The destruction will be greater than was witnessed in the previous two World Wars.”[1]

Some at the time, hastily deemed his conclusions on global affairs as ‘pessimistic’ – to speak of far reaching global war at a time when such a thing was almost inconceivable, indeed raised some eyebrows.

Whereas the growing tumult the world continues to experience should serve as a stark and timely reminder as to the perils that result from political leaders failing to act on such warnings, some continue to dismiss it and do so to their own detriment. Others however, over time, have come to acknowledge the very real risk that this presents.

In a Bloomberg article, Tyler Cowen, an American economics professor at George Mason University, expressed concern that nuclear war is still very possible and a frightening prospect. Additionally, the Lords’ International Relations Committee chairman Lord Howell expressed that the world was dangerously close to a world without arms control agreements, paving the way for a new arms race and for an increased risk of nuclear weapons use. In an interview with the New York Times, France’s outgoing Ambassador to the United Nations, Francois Delattre, expressed concern that the world was growing more dangerous and less predictable by the day.[2]

Despite such obvious misgivings about the world’s precarious trajectory, political leaders have failed to act. 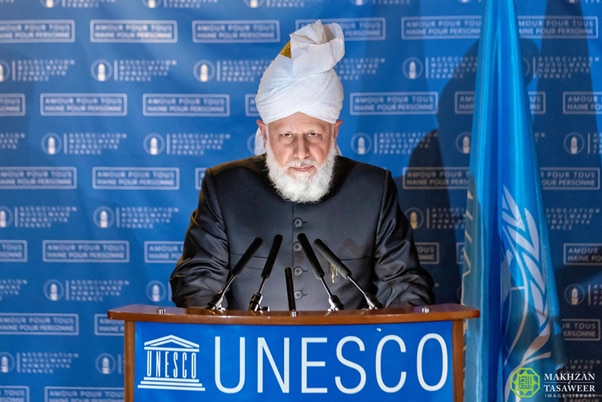 Since His Holiness spoke on this in 2013, there have been at least 38 wars[3], including the Iraqi insurgency, clashes in Myanmar and the war in Yemen. In the midst of the ongoing pandemic, Armenia and Azerbaijan are engaged in conflict over the disputed territory of Nagorno-Karabakh.

Against this backdrop of escalating conflict and injustice, His Holiness, in a sermon in December 2015, stated:

“The severity of the situation is such that a Third World War could begin at any time – in fact in reality a Third World War has already begun on a small scale. I have been warning of this for a number of years but only now analysts and world figures have started to agree.”[4]

The United Nations, the European Union, NATO, regional organizations across the Americas, Africa, Asia and the South Pacific have been established with the primary purpose [5]of preventing future wars. But where they have seen some success, sadly they have also experienced far too many failures. That is partly because of inherent injustices in decision making processes, all of which heighten the prospect of the very miscalculations General Carter speaks of which can in turn, lead to war.

Hazrat Mirza Masroor Ahmad’s long standing and insightful analysis have laid bare the underlying causes of weak international governance structures. During a lecture delivered at York University in Toronto in 2015 His Holiness said :

“At the United Nations it should not be that certain countries wield undue power and influence, or that the permanent members of the Security Council care only for their own interests and utilise their veto power even where it is in conflict with the interests of the majority. Rather, all members of the United Nations should work together and fulfil the covenant of trust upon which the institution was founded – to maintain the peace and security of the world.”[6]

Despite such warnings, systemic injustices within international organisations still continue to this day. Certain nations consider themselves to be ‘first amongst equals’ and the most glaring example is the ‘veto’ power afforded to the five permanent members of the United Nations Security Council.

In October 2020, Sitram Sharma a journalist at the The Statesman  reiterated what His Holiness had stated five years earlier. Sharma wrote:

“The world has changed beyond recognition since the founding of the United Nations in 1945. But the United Nations refuses to reform or more aptly the permanent five members of the Security Council China, France, Russia, the United Kingdom and the United States always argue for the retention of their veto, thus blocking any major reforms.”[7]

Injustice is the gateway to conflict

If General Carter’s warning represents a shift in the level of risk that global leadership attributes to the possibility of another world war, then his comments will be significant, particularly if they influence those who might have previously ignored its very real prospects.

Clearly, the manipulation of poorer nations, or the oppression of the weak by more powerful countries are especially relevant factors.

“Today, we are seeing many first-world countries increasing their investments in the poorer and developing nations. It is imperative that they act with justice and seek to help those nations and not merely utilise their natural resources and cheap labour forces for their own national gains and profit-making.”

History has demonstrated that whenever the rights of others are wrongfully usurped and continued injustices are perpetrated upon them, conflict soon follows. In 2017, His Holiness further reminded:

“Always remember that if we seek to pursue our own interests at all costs, the rights of others will be usurped and this can only lead to conflict, wars and misery. We must all reflect and understand the precipice upon which we stand.”[9]

“The world stands in desperate need of peace and security. This is the urgent issue of our time. All nations and all peoples must come together for the greater good and unite in their efforts to stop all forms of cruelty, persecution and injustice perpetrated in the name of religion or in any other way. This includes the mockery of any religion which can incite frustrations and resentment and of course also includes the hateful activities of extremist groups who are falsely justifying their evil acts in the name of religion.”

Since his election on 22 April 2003, His Holiness has been invited to speak at Parliaments and significant institutions world-wide. Directly addressing global leaders, he has warned them of the dangerous and destructive trajectory that they are following. With that, he presents a solution – that to safeguard the world from destruction they must turn to Allah the Almighty and act with justice.

The central theme of these proclamations is that both the public and government officials, should recognise Allah the Almighty and turn to Him. His Holiness has been clear that warfare and conflict can be avoided if the world recognises its Creator and fulfils the rights of His Creation.

In his 2013 address in Los Angeles, His Holiness said:

“The key to peace is to stop cruelty and oppression wherever it occurs with justice and equality. Only when this principle is followed will global peace develop. This will only happen when the people of the world come to recognise their Creator. It is my ardent hope and prayer that the entire world urgently comes to understand the needs of the time before it is too late.”[10]

Justice sits at the heart of a more peaceful and tolerant world. Whilst the need for justice is often recognised, powerful countries have often failed to procure it if doing so would cut across their own interests. Indeed, many have unashamedly continued to misappropriate the rights of others.

Addressing dignitaries at the National Peace Symposium in Canada, His Holiness said:

“Everyone appreciates that the world stands in great need of peace and harmony, yet despite comprehending this, it seems as though people are unwilling to take the necessary steps to achieve it. Regrettably, in many parts of the world, far greater priority is being given, either directly or indirectly, towards asserting dominance and supremacy over others and satisfying a craving for power and authority.”[11]

His Holiness’ guidance acts as a timeless reminder of the need for justice and how it is to be secured.

“If we truly want peace in our time then we must act with justice. We must value equality and fairness. As the Prophet of Islam (peace and blessings be upon him) so beautifully stated, we must love for others, what we love for ourselves. We must pursue the rights of others with the same zeal and determination that we pursue our own rights. We should broaden our horizons and look at what is right for the world, rather than what is only right for us. These are the means for peace in our age.”[12]

The deteriorating condition of the world now tells us that indeed the words of His Holiness are proven true. General Carter’s stark reminder simply reinforces these undeniable truths. The message of the Caliph to the world could not be clearer. As he said, in an address in London in March 2011: 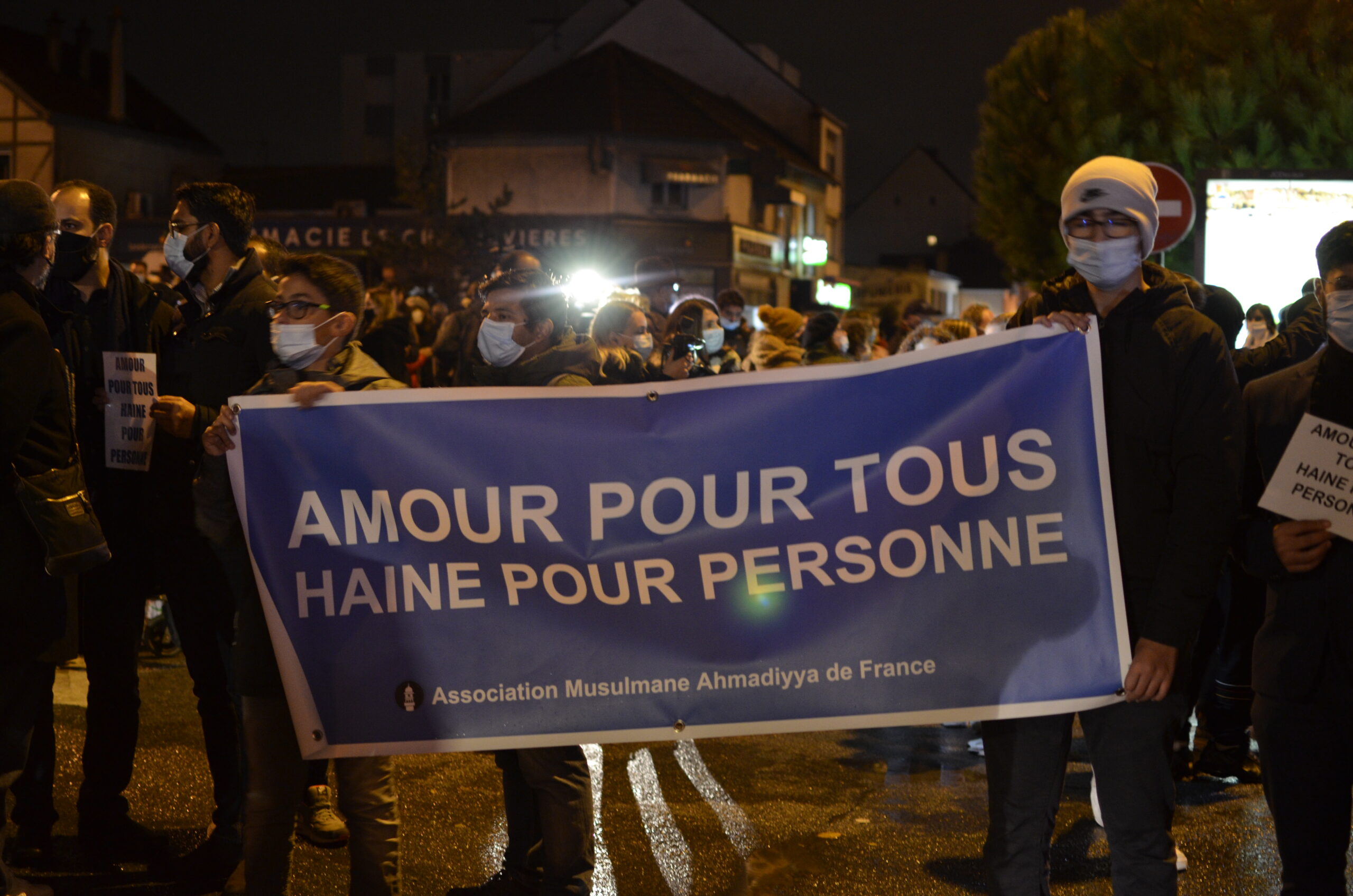 Terrorism in France and How Muslims should Respond 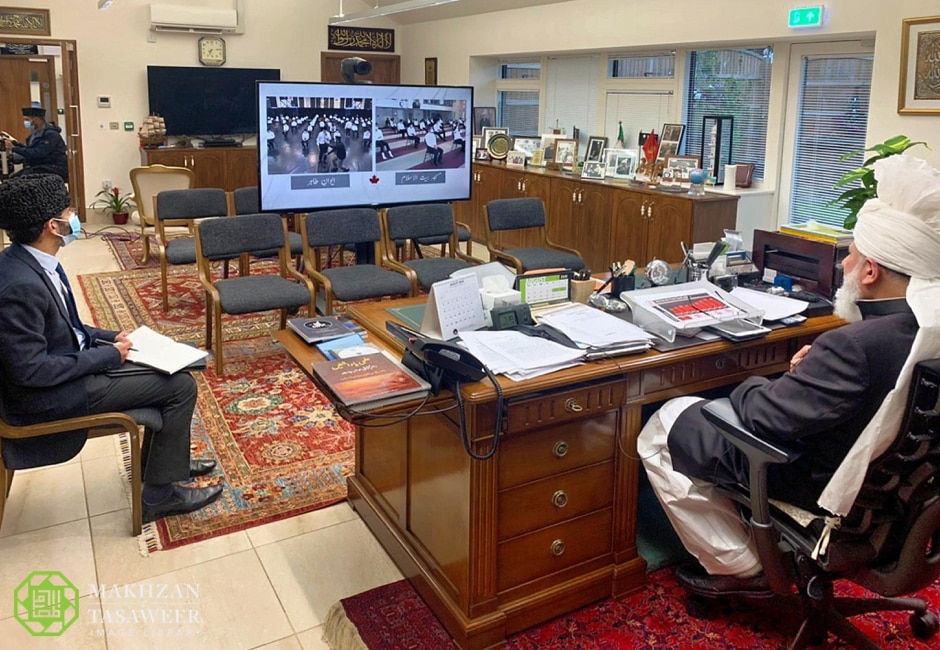