A Story of Allah’s Mercy, the Most Supreme

We are only in the fourth month of 2020, but I think all of us feel that this is the fourth year we have experienced since January. Countless tragedies and massive events have rocked the world since the beginning of this year. Of course, the greatest tragedy still persists; the Covid-19 affliction.

This is something very personal to me as this illness unfortunately reached my own home… How? I still do not know. However, what I do know is that my husband, Ibrahim Ikhlaf, and who was the first to show symptoms, does not sleep daily for more than 3-4 hours. He spends the rest of the day working for the sake of Allah as someone who has dedicated his life to Him.

If he is not in the office or Jamia (where he teaches Arabic), he will be travelling by car here and there to do work or to participate in a programme or a meeting; for years he has been driving about 90-100 miles a day. Consequently, he also neglects his meals; all of this has definitely weakened his immunity and made him easy prey for the coronavirus.

The virus infiltrated his lungs within days of contracting it, and inevitably the emergency services had to be called. He was transported to hospital and within a day of his arrival, he was admitted to intensive care.

Before he went to hospital he was bedridden as a result of severe exhaustion.

As for myself, I had symptoms of a high fever, shivering and a slight cough, but I was strong enough to perform essential household chores and Jama’at work by the Grace of Allah. However, when my husband was admitted to intensive care, my legs were no longer able to carry me. I felt as though I was in a whirlpool in the middle of the ocean, waves throwing me left and right, and as if I was on the verge of drowning at any moment.

I was psychologically – not physically – very weak, yet this psychological weakness began to put pressure on my chest, heart and lungs. On one hand, my husband was at the brink of death, and on the other hand, I was anxious about my children.

Many painful questions tormented my heart and mind.

What pained me immensely were some of the insensitive messages I received from a number of sisters, enquiring my exact symptoms. One particular pained me. One lady told me, “Do not worry, it is God’s will, a forgiveness of sins”. Yes, I knew that for any calamity that befalls a believer “even if it were the prick he receives from a thorn,” that accordingly “Allah expiates some of his sins” (Bukhari). However, this is a matter between the servant and His Lord. There was no reason to say to a sick person that this is an atonement for your sins! God only knows the relationship between the servant and Himself.

Likewise, I learned that some of the defectors from the Jamaat were rejoicing in my husband’s misfortune. I said, “Tell them, ‘I do not wish for this disease to afflict even yourselves, but Allah is our Protector’”.

At the same time, came great moral support. I received dozens, if not hundreds of messages, especially from our Ahmadi brothers and sisters around the world, filled with well-wishes and beautiful words. Some reminded me of things Ibrahim had done that they had witnessed, saying “Allah will never waste such a person!” I was also receiving cheerful audio messages from children who were remembering us in every prayer.

I did not answer phone calls because I did not want to hear the sadness in people’s voices as this caused the feeling of pressure on my chest and lungs. I only attended the calls which were from the office staff of Hazrat Khalifatul Masih V (aba), my doctor friends following up my case on the phone or the two of my husband’s friends who were in contact with the hospital.

So at this point, I would like to inform you about Hazrat Amirul mu’mneenaba.

I am from Syria, my siblings after the war became scattered all over the world; I have not seen them for many years.

My husband was born in Holland and all of his family live there, thus in the UK we have no relatives. Even if any of our extended families were to be here, no one would worry about us – all of them have boycotted us since we entered the fold of Ahmadiyya. Yet for this reason Alhamdulillah we have had the honour of experiencing something that happened to the companions of both the Messenger of Allahsa and the Promised Messiahas.

Despite our foreignness and loneliness, Hazrat Amirul mu’mneen (aba) was and still is a compassionate father to us. He cares for us as he does for his own children, who themselves are like our own siblings. I consider his dear wife a mother; in fact, she is both my mother and friend.

The love and care that I received from all of them, especially Huzoor, while my husband was in hospital made me think of the great companion of the Holy Prophetsa, Hadhrat Salman Al-Farisira. He was a foreigner among the Arabs, nonetheless, the Messenger of Allahsa announced that he was from among his own household.

Similarly, I felt that I was from among the household of Huzoor. He would send medication to us, recommend the type of food that the Jamaat should send us as well as follow up our conditions through his family members and office staff. I truly cannot put into words what His Holiness did for us; whatever I write will not do his actions justice. We are profoundly grateful to Huzoor, may our lives be sacrificed for the sake of Khilafat, Ameen.

Of course, I will not forget the Friday Sermon Huzoor delivered on 20th March and his statement regarding the virus in Al-Hakam newspaper. His Holiness’ words were a response to the letters I had written to him and like a healing balm. However, despite my certainty that they were responses to myself, I did not receive a direct word of reassurance from His Holiness for two days.

Subsequently, when respected brother Munir Odeh sahib (Director Production, MTA International) was about to meet Huzoor, he called me and asked: “Do you want me to tell Huzur anything?” I said: “Please tell Amirul mu’mneen that I am waiting for a word from him that will reassure my heart.”

When Munir sahib said this to Huzoor, Huzoor kept silent.

But at the end of the Mulaqat Huzoor said:

“Tell Reem, rest assured, nothing will happen to Ibrahim, and he will recover from it”.

Consequently, I was certain that my husband would recover by the Grace of my Beloved God.

The Mercy of Allah

Here I will tell you about Him.

Of course, I spent days and nights praying to the Lord of the Worlds. I remembered the Hadith about the three men who were in a cave when a rock fell and blocked its door. They started beseeching Allah and recalling the best deeds they had sincerely done for His sake. Whenever one of them mentioned something, the rock moved a little bit until the door gradually opened and they survived.

I thereby recalled in front of my Beloved Lord the things which Ibrahim and I did purely for His sake, and He knows them best. I also used to recite the prayers of the Messenger of Allahsa, the Holy Qur’an and the Promised Messiahas.

Then Allah put it in my heart to use the supplication of Jesusas when he was on the cross: “O Allah, remove this cup from us”. I repeated this prayer hundreds of times until I felt that as Allah had removed the cup from Jesus, He would remove it from us too.

One night I saw in a dream that a Christian nurse named Noura was taking care of Ibrahim in the hospital with compassion and love. At the same time, she tried to evangelise him. Then he was discharged from the hospital shortly after, he told me what happened and said “By the Grace of Allah, I have broken her cross,” meaning he had refuted all of her claims about the crucifixion of Jesus or him being God.

The strange thing is that there had in fact been a Christian nurse looking after Ibrahim with great care and compassion and with whom he had discussed Jesus. He explained to her Jesus’ real status as per Islamic teachings and upon hearing this she was very happy and satisfied, Alhamdulillah.

Now, thousands of Ahmadis around the world, and above all Hazrat Amirul mu’mneen, were praying for us with heartache and love. Many of them gave alms and sacrifices, brother Sharif Odeh (Ameer Jamaat Kababir) prayed in Baitul Dua’a in Qadian. I have been receiving messages filled with sincere supplications from everywhere – Qadian, Rabwah, America, Canada, the Arab world, Europe, the United Kingdom.

I will not forget my friend Berevan in Norway, who on the day Ibrahim entered intensive care, texted me asking, “Are you okay? I was praying then suddenly Allah put it in my heart that I have to pray a lot for you and your family”. I said, “O my Lord, I am certain that You inspired her in such a way only because You want to answer her prayers.”

Due to all of this, the hope in the Mercy of the Lord of the worlds increased in my heart and I was certain that He would send down His Mercy upon us.

Indeed, my husband’s condition improved every day. He was out of intensive care after four days and on the fifth day was back home, by the Grace and Mercy of Allah.

Now when I think about it, I see how many benefits and blessings this experience has brought us. Besides, I see that it was a response to my prayers. Yes, Allah has answered my prayers, as I have always prayed, “Please do something that brings us closer to You”, and now He has responded.

As for the other benefits that we have gained, people have shown us love much more than ever before, and we know from the hadith that this love comes from the love of Allah.

I additionally saw for the first time in my life the veritable manifestation of the Messenger of Allah’ssa saying: “The similitude of believers in regard to mutual love, affection, fellow-feeling is that of one body; when any limb of it aches, the whole body aches, because of sleeplessness and fever” (Muslim).

Indeed, I was receiving messages of support and prayers even at the time of the tahajjud prayer before dawn.

The greatest benefit is that we increased our closeness to Allah Almighty, our faith and our belief in the station of Khilafat and how it is the lifeline in this world and the hereafter.

My dear sisters and brothers:

A small virus that cannot be seen with the naked eye has conquered the greatest countries and paralysed the world.

So, let us benefit from our faith, turn to God Almighty and beseech His mercy and that He removes this scourge from the earth.

Let us enlighten the whole world about their Creator and tell them that salvation is dependent on the belief in His Holy Prophetsa and His Messiahas. Whether we die with this virus or otherwise, may we be accepted by Allah the Almighty, Ameen.

Guidance of His Holiness, Hazrat Mirza Masroor Ahmad, Head of the Ahmadiyya Muslim Community Regarding Covid-19 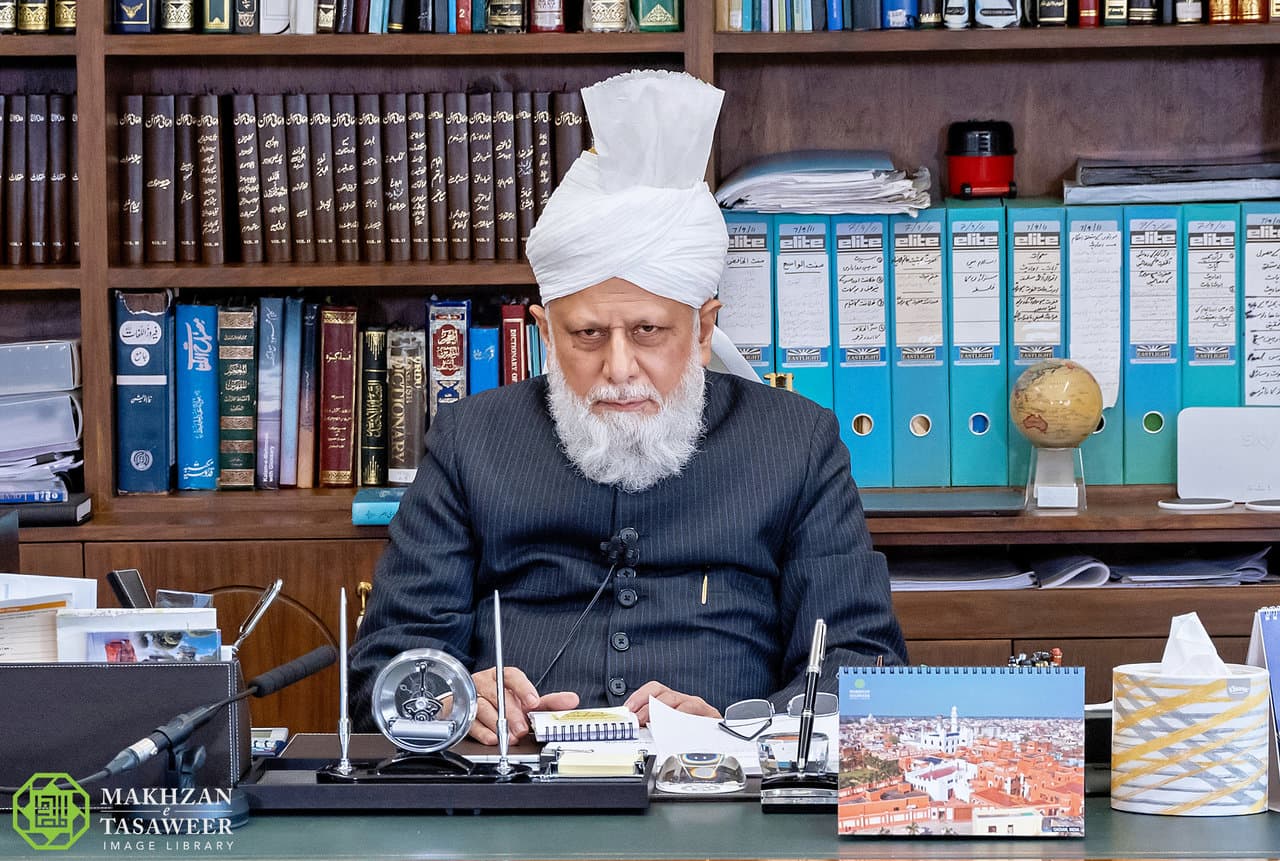